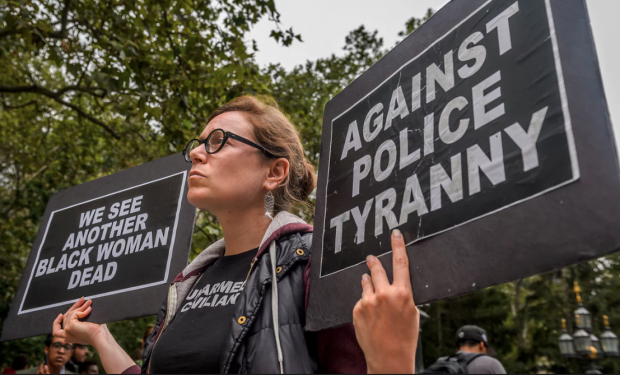 Above Photo:  Police departments are clearly failing, and they should be taken over. Photograph: Erik Mc/Pacific/Barcroft Images

One of the goals of Millions March NYC has already been met: the police commissioner resigned. Now it’s time to take their other demands seriously

My professor friend AJ and I led a walking tour of college students earlier this week about protest and policing in New York City. Between our stop at One Police Plaza, where “broken windows” policing was unleashed on our city, and the site of Eric Garner’s death on Staten Island, we stopped at the newest occupation in town at City Hall Park.

Mayor Bill de Blasio had just announced police commissioner Bill Bratton’sresignation as we walked through the park, quickly achieving one of the occupying group’s three ambitious goals when they appeared on Monday. The other two call for defunding the NYPD and using some of that money for reparations for survivors of “police terrorism”.

The group, Millions March NYC, makes a solid point: it is imperative to defund police departments across the country immediately, redirecting that money instead to black futures and the marginalized. Because while reparations paid to next of kin for police abuse is already a billion-dollar business, there is no need for anyone to be executed in the first place.

As Millions March accurately explains, “Policing is a violent, anti­-black institution that originated as slave patrols and expanded into the domestic occupying force seen today in working­ class communities and communities of color.”

Policing doesn’t work. While crime was at historic low levels in 2015, American police managed to kill 1,146 people that year, and another 633 so far in 2016. But police acting as judge, jury and executioner in these killings – which often occur in poor neighborhoods – isn’t what has made national crime low overall. “The differences between what parts of the country are more safe is not a matter of who has the most policing,” Elsa, a protester at City Hall Park eloquently put it to me. “It’s a matter of who has the most resources.”

Policing can’t be reformed by technology, and cameras aren’t slowing down or stopping police killing sprees. We are routinely hearing that supposedly mandatory body camera are mysteriously or deliberately turned off at crucial moments. Still, even when officers know they are on video, they still seem to have no trouble killing (or even telling the dying, “fuck your breath”). Police violence can’t be solved by tech. In fact, viral videos of police abuse and death serve an important purpose: they inspire fear and terror, in what some hope will create docility and compliance among black people.

Nor can policing be reformed by scaling down, as the continued racial profiling of the NYPD shows. According the the New York Civil Liberties Union, the NYPD stopped and frisked 685,724 New Yorkers in its most egregious year, 2012, of whom 87% were black and Latino. After reforms, “only” 22,939 New Yorkers were stopped last year … and yet, 83% were still black or Latino. The racial disparity of the stops remain almost unchanged, even though white people are more likely to be walking around with guns or drugs.

Policing can’t be reformed by “community policing”, either – through dancing memes or stunts of friendly cops. As Elizabeth Hinton writes in From the War on Poverty to the War on Crime, Police Athletic Leagues were designed as “pre-emptive strikes for cops to find ‘potential criminals’ under the cover of providing social services”. More recently, video of a police department in Virginia has been making the rounds showing police officers giving out ice cream instead of tickets. This stunt is not legal – it is not OK for police to stop you for the “gift” of receiving ice cream at gunpoint – and it exposes how insipid, insidious and infantilizing the optics of police reform are.

The police will gobble up resources not out of need, but out of irrational fear, such as when the NYPD added 1,300 cops even as crime is low. It is amazing to me that when a public school is trying to educate children whose parents are underpaid, underinsured and struggling for food and shelter, it can be labeled a “failure”. Such a school can be taken over, made into a charter school, and turned over to the market. Police departments just get larger budgets.

Yet they are clearly failing, and should be taken over, though not given to the market. They already respond enough to that. Instead, they should be defunded until they can prove their relevance to society. Until such time, their budgets should be diverted to educate, feed and empower the people they police, until our society is so just it doesn’t require a heavy-handed need for obedience obtained through violence.