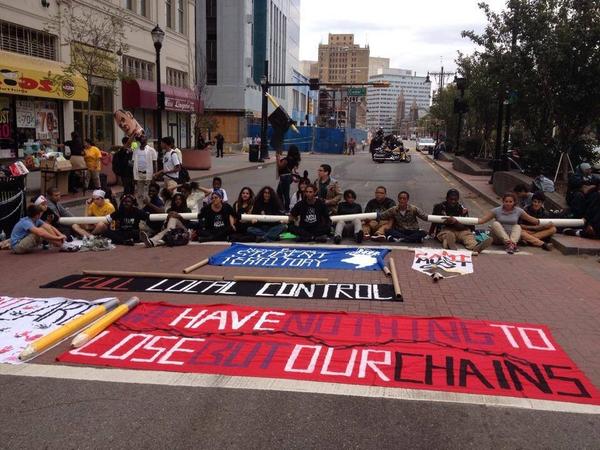 After 12 Hour Blockade Newark Students: ‘We Believe That We Will Win’

Above: Newark students declare “We have nothing to lose except our chains.” All photos from Twitter, #ournewark.

Students Declare Victory After 12 Hour Blockade that Shut Down Newark

A students mother has watched her daughter link arms for 12 hours. Tells her daughter how proud she is #ournewark

Student say they will not leave until their demands are met or until they are forcibly removed. They are blocking the streets of Broad and Raymond. Some people are buying them ices but they could use food and water. Follow them on twitter #OurNewark.

On Wednesday morning students blockaded the Newark Public Schools headquarters, locking down, sitting in and engaging in civil disobedience.

The Newark Students Union took their demands for full local control of their schools by walking out and protesting on September 9, 2014. The students walked out marching down the street, stopping traffic, in an ongoing battle since the district was put under state control years ago and Governor Christie appointed Cami Anderson as superintendent.

The students held teach-ins and a rally in Military Park in Newark. Students from Science Park High School, Arts High School and Central High School gathered to participate in courses on the history of student activism, art-making for activists and a workshop on student rights.

“We are building a movement to take back democratic local control of our schools,” Kristin Towkaniuk, president of the Newark Students Union to Eye Witness News. “Our action…will be an escalation demonstrating the community’s unrest over Chris Christie’s efforts to privatize our public schools.”

The boycott, and the Freedom Schools run by PULSE NJ continue. The actions are part if a two-day walk-out which continues today. The students promised dramatic action today when they take their protest to Newark Public Schools headquarters.The protest comes on the heels of a parent-led boycott during the first two days of the new school year and amid strong criticism of the school district’s failed transportation plan that left countless children stranded on the first day of school.