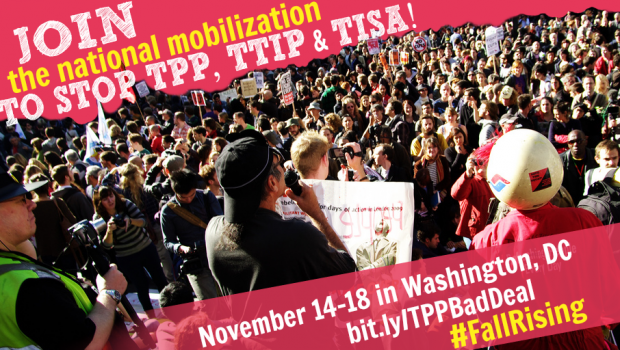 Newsletter: 10 Shocking Realities of the TPP; Join The Revolt

Note: All memes are from Flush The TPP.

The Secretly Negotiated TPP Will Impact Your Life In Many Ways; Together We Can Stop It

[Note: This newsletter has been edited.]

Finally, the text of the TPP has been released. It is not as bad as we expected – it is worse.

Now we see why the US Trade Representative and President Obama initially made a deal to keep the TPP secret for four years after it was ratified. If it had not been for a very aggressive fight against fast track trade authority, in which hundreds of thousands of people participated, we would not be seeing the text. One of the compromises made in order to get just enough votes to pass fast track was to agree to release the text publicly for 60 days before the President signs it.

Why did they want to keep it secret? Because they knew that if the people saw the text, it had much less chance of becoming law.

Here are 10 examples of things they wanted to hide from you:

1. ObamaTrade More Unjust Than BushTrade: The Obama administration is claiming that this is the most progressive trade agreement in history – a model for the 21st Century. In fact, the TPP is actually weaker in terms of labor, public and environmental protections than every agreement since the Bush-era agreements of 2007. The TPP has rolled back some of the progress made during that era on issues like limiting monopolies to ensure access to medicines and stopping polluters. Prior trade pacts included an exception that allowed governments to take action to protect their countries’ security at ports when necessary. Under the TPP, a trade tribunal can punish a country if their security actions interfere with profits.

2. Replaces Federal Courts With Kangaroo Trade Tribunals: The TPP dramatically weakens Article III constitutional courts, the third branch of US government, and replaces federal courts with corporate tribunals that are designed of, by and for foreign corporations. These trade tribunals will be corporate kangaroo courts with no standards for transparency or due process common in federal courts and courts in TPP countries. The “judges” will be three corporate lawyers who can serve as judges in one case and advocates for corporations in others. This dual role is considered a conflict of interest and would be unethical in federal courts. It creates an incentive for a “judge” to expand the power of corporations in their decisions, which they can use to their advantage when they sue on behalf of a corporation. There is no appeal, so these “judges” will not have their decisions reviewed. The tribunal has full discretion in determining how much governments must pay in damages, which can include “expected future profits.” Even when governments win, under TPP rules they can be ordered to pay for the tribunal’s costs and legal fees. It does not matter why a government put in place a new law, e.g. an environmental crisis, financial crisis or new health discovery is not relevant.

3. Expands Trade Tribunals to Undermine Virtually Any Policy in the Public Interest: The TPP builds on the phony corporate court system. It doubles the number of corporations that could use this system to challenge US policies by newly extending it to more than 9,000 firms operating in the United States. For the first time corporations can sue if they believe their intellectual property rights were violated and challenge financial regulations in the trade tribunals. Under this tribunal system only foreign corporations can sue, US corporations do not have the right to sue so US corporations have less rights in the US than foreign corporations. Unlike real court systems where people impacted can sue if they are damaged or unions can sue if workers are damaged or environmentalists can sue to protect the environment – under the corporate tribunal system, only corporations and governments can sue.

4. Major Expansion of the Race to Lower Wages: The new Speaker of the House, Paul Ryan, claims that the TPP will have no impact on immigration. Now that the TPP has been released, we can see this is an outright lie. Chapters 10 and 12 expand the number of L1 worker visas and the number of tourist visas permitted for business purposes. Insourcing will mean that US jobs are lost to unlimited foreigners coming into the United States with foreign corporations. This will displace US workers and cause a downward spiral in wages. If the US does not allow foreign corporations entry into the US, it can be sued in the corporate trade tribunals and be forced to do so.

5. Environmental Standards That Cannot Be Enforced: Environmental standards are written in very vague language making them impossible to enforce. For example the TPP says “Each Party shall strive to ensure that its environmental laws . . .” How do you enforce a standard that says “strive to” as the requirement? Or, each country agrees “to combat” trade in illegal lumber; another unenforceable phrase. Countries are required to “deter” illegal fishing. What does that mean? If they said “ban” illegal fishing you would have something enforceable but “deter” is too vague to enforce.

6. Prevent Legislation To Combat Climate Change: The greatest planetary crisis of our times is climate change. How many times in this nearly 6,000 page document is climate change mentioned? Zero. Not once. In fact, the TPP will undermine climate change legislation and policy by encouraging more extreme extraction and export of gas. Exports to member countries like Japan will be fast tracked through the permitting process. The TPP will give the gas industry the power to sue in corporate tribunals to prevent any laws written to prevent extraction, such as fracking. And, corporate trade agreements will undermine any climate solutions that come out of the United Nations meeting in Paris this December. The TPP will be binding law while the climate agreement will be non-binding and must be consistent with the rights of the gas industry to extract, export and profit from fossil fuels.

7. Unsafe, Inadequately Labeled Food: The TPP will undermine food safety. Big agribusiness and food corporations had language included that will undermine US food safety oversight and expose consumers to risky imported foods. Corporations can challenge border inspections by giving corporations new powers to second guess inspectors and push uninspected food onto the market. The US will also be required to accept foreign food safety standards that are weaker than US standards. The TPP is the first trade agreement to provide specific biotechnology protections for genetically modified organisms (GMOs). Agribusiness and biotech seed companies can use trade rules to challenge countries that ban GMO imports, test for GMO contamination, do not promptly approve new GMO crops or even require GMO labeling.

8. End of Buy America: The TPP prevents the Federal Government from giving preference to US-manufactured products in their purchases, known as “Buy America.” Foreign bidders must be treated as equal to US bidders. This means the federal government cannot stimulate the economy by creating jobs within its own borders, for example through a national project to build and install renewable sources of energy or remake our transportation system by transitioning our abandoned factories to manufacture solar panels or electric trains. And, developing nations cannot use their limited funds to create jobs in their country but must be open to bidders from developed nations. The TPP requires negotiations within three years on applying these rules to state and local governments to ban “Buy America” preferences at those levels as well, threatening our growing local economies.

9. Open Internet Threatened: Under the TPP, Internet service providers are coerced into becoming copyright police who enforce the expanded copyright laws. They will have to take down websites that are in violation or face high fines if they fail to do so. Copyrights are expanded until 70 years after the death of the creator, keeping information, art and more out of the public domain. It does not include the “fair use” provisions of current copyright law. The TPP attacks whistle blowers by broadly criminalizing “trade secrets” and expands trade tribunals to allow corporations to sue for intellectual property damage. TPP poses a grave threat to our basic right to information and free speech on the web, and could easily be abused to criminalize common online activities and enforce widespread internet censorship.

10. Threatens Public Health Systems Including Medicare and Medicaid: The TPP threatens health systems designed to serve the public interest like Medicare, Medicaid and single payer systems in other countries. It does so by giving greater power to pharmaceutical and other medical companies to demand higher prices for their products and pass the costs of their advertising to patients. TPP “recognize[s] the value” of pharmaceutical products or medical devices through their “objectively demonstrated therapeutic significance,” regardless of whether there are effective, affordable alternatives. This means that medical formularies can be required to include expensive drugs or technology that has no increased value over what is already available. The TPP makes it much more difficult for Medicare to negotiate lower prices. The TPP also blocks generic drugs from entering the market.

These are just some of the reasons why people are rising up against the TPP. A ‘movement of movements’ has developed that represents millions of people around the world who oppose the TPP. This November 14 to 18 join us in Washington, DC to protest and show this widespread opposition to the DC power structure. And sign this petition telling the congressional leadership to reject the TPP. We can stop this disastrous trade pact if we rise up together and say ‘No’ to the TPP.