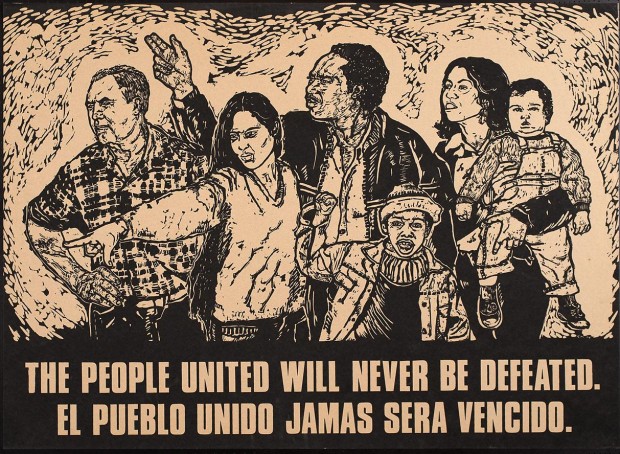 Newsletter – A People United Will Never Be Defeated

This week, hundreds of thousands rallied in Washington, DC for the Million Man March, more information became available regarding US war crimes, we celebrated the second annual People’s Climate March and World Food Day and we are preparing a mass mobilization to protest the TransPacific Partnership.

On ’10-10-15,’ the  National Mall was packed with people of color, including many Indigenous people, for the ‘Justice or Else’ rally organized by the nation of Islam. Speakers called for uniting in the “common struggle… for freedom, equality and economic access.” Chris Hedges, who teaches prisoners, writes about the devastation that poverty wreaks, “…when you are poor in America, everything conspires to make sure you remain poor. The invisible walls of our internal colonies, keeping the poor penned in like livestock, mirror the physical walls of prison that many in these communities are doomed to experience.”

A central message at the ‘Justice or Else’ rally was the need for communities to join together to meet their basic needs and to build community wealth. Les Leopold’s book, “Runaway Inequality: An Activist’s Guide to Economic Justice” is a good place to start learning how to do this. We also recommend the Democracy Collaborative website. There are many communities in the South that are building economic justice through local food systems. Click here to learn about them.

Perhaps in response to the ‘Justice or Else’ rally, hate groups called for anti-Muslim rallies nationwide, but this effort backfired. Few people showed up to protest. Instead, many people gathered to stand with Muslim communities.

This week, Black and Palestinian artists released a video expressing solidarity between their struggles through the message, “When I see them, I see us.” This is an important time to show support because violence by Israel against Palestinians is escalating. Human rights groups are denouncing Israeli attacks on unarmed Palestinians. Thousands in Israel are protesting and calling for a general strike.

There are many similarities between the Black Lives Matter and pro-Palestinian movements which face structural racism, violence and mass incarceration. This week a US Court of Appeals found that Muslims in New Jersey were subjected to surveillance solely on the basis of their religion and a new report reveals that pro-Palestinian activists in the US, particularly on college campuses, are being targeted.

There will be more opportunities in the coming week to rally in solidarity against structural racism and mass incarceration. Check to see if there are #RiseUpOctober events near you.

The bombing of a Doctors Without Borders (Medecins Sans Frontieres or MSF) hospital in Kunduz, Afghanistan by the US military this month may trigger the first investigation ever into war crimes by the International Humanitarian Fact Finding Commission (IHFFC). MSF asked for an independent investigation and the IHFFC has agreed to conduct one, but the US and Afghan governments must agree to cooperate.

New evidence was leaked this week that the cockpit crew in the plane that bombed the hospital knew it was a hospital and questioned the legality of the bombing before proceeding. CLICK HERE to sign a petition to President Obama to release the tapes.

Sadly, after fourteen years of failed foreign policy in Afghanistan, the Obama administration has reversed its promise to end the attack and will continue to keep 10,000 troops there. In an interview, Professor Junaid Ahmad tells us that the situation in Afghanistan is worse than it was before the US invaded because of the US invasion. On Clearing the FOG Radio, Kathy Kelly says that a continued US presence will bring neither stability nor peace.

In what is being called ‘a new Edward Snowden,’ an anonymous whistleblower has released classified information about Obama’s drone program to investigative reporters at The Intercept. Published as “The Drone Papers,” the information shows that the president authorizes drone assassinations, that the intelligence is faulty, that innocent civilians are killed in the attacks and that White House statements are inconsistent with reality. As a result, Amnesty International is calling on Congress to investigate the drone program. For more perspective, read Cesar Chelala’s article on Killer Robots.

And, what happens when peace activists meet with the executive staff of the US Institute for Peace? In a very revealing meeting, the group of activists, which included Kevin Zeese, learned that the USIP actually believes in war and cannot oppose war or their public funding will disappear. In fact, with Pentagon officials on their board, it seems that USIP serves as a nonviolent tool for US Empire.

After 500 years of oppression, Indigenous Peoples and allies are uniting from North and South America to protect the earth. Indigenous women signed an historic treaty to that effect in New York City on the eve of the Super Moon. The final words of the treaty call for people to resist destruction of the earth nonviolently wherever it is occurring until it stops.

Last weekend at the World Peoples’ Conference in Bolivia, participants put forth a list of demands to be presented at the COP 21 meeting in Paris this December. They call for binding agreements that address the root causes of the climate crisis and that create a new paradigm rather than reinforcing market ‘solutions’ that enrich a few and exploit many without solving the crisis.

On Wednesday, people around the US marched to show that the climate movement is broad and diverse and to make connections between the climate crisis and the other crises we face. In Washington, DC, marchers held a massive die-in at the doors of the American Petroleum Institute and then marched to Freedom Plaza chanting “We are the 99%” as we neared the plaza (which brought back memories from our days there in 2011).

New attention is being paid to Exxon’s role in suppressing science about global warming. Two members of Congress are calling for the Department of Justice to investigate Exxon. Activist Bill McKibben is asking people to exert pressure by protesting at Exxon-Mobil gas stations as he did last Thursday.

On Friday and Saturday in Washington, DC, March Against Monsanto held marches and rallies for World Food Day. We marched from the White House to the offices of the US Trade Representative to the Environmental Protection Agency to the offices of Monsanto lobbyists and the National Grocery Manufacturer’s Association. This narrative march called for labeling of foods containing GMOs and for bans on cancer-causing pesticides and protested the DARK Act and international agreements such as the TransPacific Partnership (TPP) that threaten food security.

Food Justice advocates called for an immediate transition away from large-scale industrial agriculture practices to those that are organic, restore the integrity of the soil and sequester carbon. At a World Food Day press conference, Andre Leu said that there is good science showing that regenerative agriculture “can reverse climate change, end the loss of biodiversity, stop the poisoning of our children and planet and very importantly, nourish all people with high quality food.”

Vandana Shiva wrote that because of the rise of Big Ag, “For the planet and people, the costs have been tragically high. 75 per cent of the earth’s biodiversity, soils, water have been destroyed, the climate has been destabilised, farmers have been uprooted, and instead of nourishing us, industrial food has become the biggest cause of disease and ill health.”

Uniting our Struggles is Essential

Popular Resistance is collaborating with a growing number of organizations and people to protest the TransPacific Partnership and other international treaties that will prevent us from achieving success in our struggles for racial, economic and environmental justice. We are planning a mass mobilization in Washington, DC this November to show the large and diverse opposition to agreements that force us to sacrifice the health and safety of our communities for corporate profits.

There will be two days of action and arts preparation followed by three full days of creative events. You are invited to participate in any way that you can. CLICK HERE for the Call to Action and to register to either attend the events or plan local events in your community. There will also be opportunities to participate virtually from wherever you are in the International Hack-A-Thon. And make sure you sign the petition to Congress that we will deliver during the actions.

We ask that you support this mobilization with a donation. All donations of $25 or more will qualify for a “Stop the TPP” T-shirt. Just write to info@popularresistance.org to tell us your size if you want one. CLICK HERE to donate.

We are rising together, and a people united will never be defeated!