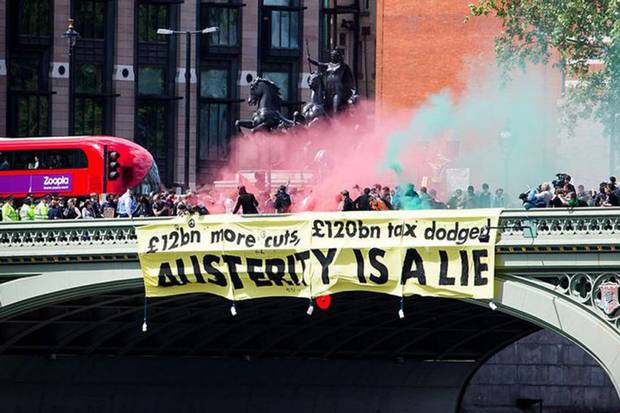 Newsletter – Austerity Is A Weapon

Austerity, decreased spending by government on necessary programs, is a type of economic sanction like the ones that are often imposed by one country upon another country as a form of punishment. Financial elites and their institutions such as the International Monetary Fund (IMF) force austerity measures on countries that have been driven into debt in order to extract every ounce of wealth from them and weaken the populace’s ability to resist.

Austerity is a fundamental tool in the neo-liberal agenda that is spreading around the world to monetize and privatize everything. It is fundamental to our success in resisting this agenda and preserving a livable future that we understand austerity amounts to sanctions against the people.

In “Four Lessons From Iceland And Greece For Movements Fighting Austerity,” George Lakey writes “I’m struck by the overwhelming determination in both countries to take charge of their own economies. Their popular movements understand that austerity is actually a weapon in the class war.” There is a growing anti-austerity movement in many parts of the world, in the UK this weekend, youth planned an Occupy-style protest outside Parliament in London.

Sanctions mean reduced access to basic necessities such as health care and housing, even to water. They result in increased deaths, including from suicide and suffering.

In the US, the lack of a national single payer health care system is a form of sanction. The US is already spending enough to provide comprehensive coverage to everyone, but instead of doing that, the health law passed in 2010 funnels more public dollars to the private insurance industry and fuels privatization of public insurances like Medicaid and Medicare. Sonali Kolhatkar explains that the major winners in the current health system are the Republicans, Democrats and the one percent. Robert Reich writes that the US is currently headed to a private health insurance monopoly which can only be stopped by creating a single payer, Medicare for all, system.

July 30 is the 50th anniversary of Medicare and people across the  country will celebrate it with events calling for Medicare for all. Some will lobby Congress for HR 676, the Expanded and Improved Medicare for All Act. This will be followed by a National Healthcare Justice Rally in Washington, DC on August 1. And on October 1 (#TenOne), medical students will hold events and an evening vigil for Medicare for All.

Similarly, the lack of affordable housing in the US where there are sufficient vacant houses to provide homes to everyone, is a sanction. Advocates in New York share their strategy to gain affordable housing and prevent gentrification which raises prices and forces people out of their neighborhoods. London is an extreme example of gentrification as Rowan Moore describes in “London: The City That Ate Itself.”

Lack of affordable education, employment and living wages as well as cuts to pensions and safety net programs all function as sanctions against the people.

Austerity is a False Path

This week, leading economists sent an open letter to German Chancellor Angela Merkel in which they urged her to take meaningful steps to help Greece. They said that austerity has failed. While austerity may enrich the bankers, as George Monbiot explains in The Guardian, in the end it destabilizes economies and puts the whole world at risk.

Economist Jack Rasmus explains that China’s economy is in a precarious position. Major stocks fell by 30%, and more, recently. There could be more drops in stock value that would adversely impact China and the global economy. At the end of the article, Rasmus reminds us that if there is another global financial crash like the one in 2008, the central banks will require bank depositors (that means anyone with money in a bank) to bail out the banks as was done in Cyprus. This is called a “Bail-in.” Rasmus points to the potential failure of Greece and the weakening of China’s economy as potentials that could lead to a bigger crash than 2008.

Greek Prime Minister Alexis Tsipras received approval from the Greek Parliament to accept an austerity deal with the Troika in exchange for more loans, but this is causing serious division in the Left. The situation remains precarious and it is unclear whether Greece will stay in the EU.

Greece is certainly not alone. Jubilee Debt’s recent report finds that there are currently 22 countries in debt crisis and 71 more that are at risk. While more nations go into debt, rich countries refuse to live up to their decades old commitment to deliver 0.7 percent of their national income to aid for developing nations. This would have amounted to $250 billion annually. Rather than going into debt, nations and the world economy would be growing if the wealthy did not hoarde their wealth.  What is needed is a global corporate tax so that nations that are forced to provide cheap labor and cheap resources get their fair share.

The three international treaties being pushed by the Obama administration, the TransPacific Partnership (TPP), TransAtlantic Trade and Investment Partnership (TTIP) and the Trade-in-Services Agreement (TiSA), will hasten the race to the bottom and lead to more austerity. Rick Rowden lists the ways the TPP will harm developing countries, but the reality is that people in all involved countries will be harmed by rising prices, lower wages, environmental destruction and loss of democracy.

During the Fast Track fight, some members of Congress tried to include provisions that would disallow countries where human trafficking of labor (a form of slavery) exists from being included in the treaties. This would have disqualified Malaysia from the TPP. In response, Obama is reclassifying Malaysia’s status so that it will qualify, even though they haven’t changed their practices.

Now that Fast Track has become law, Obama is moving quickly to conclude TPP negotiations and bring the TPP to Congress. The next round of TPP negotiations is planned for late July in Maui. Protests are also being planned. If you live in Hawaii or know people there, please click here to take the TPP action pledge.

One piece of good news is that the text of the TPP will be released to some labor and environmental groups that are cleared by the administration. We urge them to share their analyses with the public. And, Fast Track requires the text be released for 60 days before the clock starts ticking on the Fast Track vote. Get ready to quickly educate and mobilize people to stop the TPP. We are organizing now. Join us.

The TTIP advanced in the EU this week when the Parliament voted to restart  negotiations despite considerable opposition from the public. They urged major changes in the trade tribunals, e.g. real judges not corporate lawyers and public meetings not secret ones. The TTIP is of particular concern to people in the US because it will drive more extreme energy extraction such as fracking and drilling. That explains why the Koch Brothers are lobbying the European Parliament to support it.

Click here for information on the National TPP Resistance calls. All who desire to stop the triple treaty threat are invited to participate.

Resistance to the Climate Crisis

An international group of scientists met this week to urge scientific solutions for mitigation of and adaptation to the climate crisis. Click here to read their statement.

If the UN climate treaty negotiations in Paris this December proceed as they have in the past, we can expect more false solutions, which put profits over people and the planet, to be proposed. In preparation this week, people in Amsterdam and other European cites held “climate games,” creative direct action against fossil fuels. Large protests under the slogan of “Jobs, Justice and the Climate” were held across Canada last weekend in preparation for the climate summit in Toronto. Opposition to tar sands in Alberta is also growing and is being led by First Nations.

In the US this week, protests were held against trains that carry oil, particularly the highly explosive tar sands oil called bitumen. Popular Resistance was there for actions in New York remembering the second anniversary of the oil train explosion in Lac Megantic that killed 47 people and destroyed the town.

There was good news this week – a court in Kentucky denied the eminent domain necessary for a gas pipeline that would have delivered fracked gas for export from the Gulf Coast.

There are solutions to the attack of austerity. Ellen Brown describes a potential path forward for Greece without help from the Troika where they can operate within their own borders to revive their economy and unchoke finance. With some ingenuity, Greece could even improvise as Ireland did during the bank strikes of the 1970’s. There are alternatives to submitting to the big banks. We hope Greece, and the rest of the world, begins to pursue a new economy rather than kow-towing to bankster criminals.