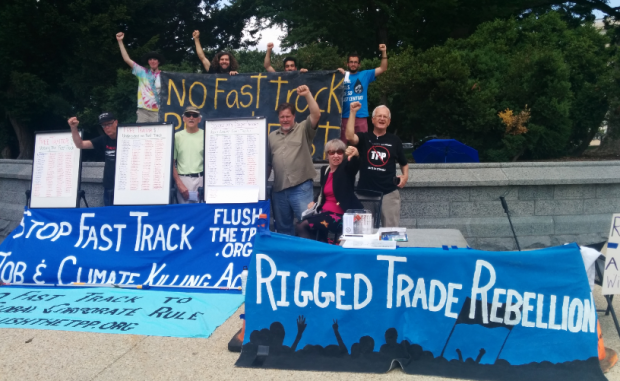 Last week there was a populist revolt from across the political spectrum. Congress received tens of thousands of phone calls every day from people who are clear which side they are on: they want people and planet before profits; they want an open, transparent democracy not a secretive oligarchy.

The campaign to stop Fast Track for corporate trade agreements like the TPP is a clarifying moment. It is democracy vs. oligarchs making decisions for us. It is transparency vs. secret law. It is the people vs. big business. It is a mobilized people vs. big money. These are the issues that unite people into a movement of movements. These are conflicts that let us know who is on the side of the people.

Fast Track victory, but our work is not done

We won an important round last week in the campaign to stop the Obama trade agenda when the House voted against Trade Adjustment Assistance (TAA). Even though they voted for Fast Track (TPA), it is stalled without TAA. In the beginning of next week there will be another challenge when the House reconsiders TAA. Mobilization is more important than ever right now.

Call your member of Congress using StopFastTrack.com or use this spread sheet which contains contact information for all of the Members who voted to stop TAA. Tell them: “No compromise, vote ‘no’ on TAA; people want jobs and a future, not job and climate-killing treaties.”

Two weeks ago, when the vote in the US House of Representatives approached, we began a daily vigil at Congress. When the date of the vote was announced, we began a 24 hour occupation so that no matter when a Member or congressional staff were there, we had a presence. We provided human faces to the tens of thousands of calls they were receiving.

On the morning of the vote, we were there greeting Members of Congress as they drove or walked into the Capitol Building for the vote with signs that warned “A Vote for Fast Track Will End Your Career, Remember NAFTA,”  “Voters Will Remember, Vote No on TPA/TAA” and “Vote TPA and You Will Face a Primary.” Congress knew the people were serious and they would pay a political price.

We felt like we had the votes to succeed, and then there was a surprise visit from President Obama. He met with the Democratic Party leadership and then with the full Democratic Caucus. Voting was delayed for more than two hours.  Our confidence declined as we wondered whether or not the Democrats would give their president what he wanted. Was the populist pressure enough to convince the Members to say “No” to the president?

We were shocked when the vote on TAA was announced – 302 Members took our side, though we needed only 218 to win. This was a landslide against the president as without TAA, Fast Track could not move forward. As you can see in this video we erupted in emotion, hugged and pumped our fists in the air. It was an amazing moment.

Then the other shocker: the House quickly passed TPA or Fast Track with 219 votes.  This brought confusion. What did it mean? How will this be resolved? The answer – a re-vote on TAA will be held perhaps as early as Monday. Our job is to prevent defections. No doubt President Obama is working to change minds. So it is not over yet.

Why Does Corporate Rigged Global Trade Unite Us?

The fight to stop the TPP and the two other international agreements (TTIP and TiSA) is an opportunity to unite all segments of the movement for social, economic and environmental justice. Last week G7 protesters united in opposition to the Transatlantic trade deal with tens of thousands protesting in the streets. The reaction by the elites was fear, more than 20,000 police were deployed against the G7 protests in Germany. There is a global populist revolt against concentration of power in big business that puts their profits above all else.

As people have gotten to know about these agreements, their opposition has grown stronger. Ralph Nader summarized a lot of the problems when he wrote “10 Reasons The TPP Is Not A ‘Progressive’ Trade Agreement“. Leaks added fuel to the fire. In the last two weeks Wikileaks published documents on two agreements. On the TPP, the leaked text showed Big Pharma using TPP against global health and specifically targeting Medicare.  The other leak was of the much less well known Trade in Services Agreement (TiSA).

These agreements are made worse by the Fast Track law. For example, Paul Ryan added an amendment to block climate deals. Congress put forward a phony veneer of objectives for the negotiations, obviously fake since they have been consistently ignored in previous deals and since the TPP is almost fully negotiated.

Opposition is building onthe left and the right as Breitbart and all of the leading conservative talk shows have come out against Fast Track for what they call “ObamaTrade.”  When Democratic Majority Leader, Rep. Nancy Pelosi refused to say whether she supported Obama’s trade agenda, Democratic groups protested her in San Francisco. Pelosi ended up opposing both TAA and Fast Track.

Back in January when pundits were saying that with Obama and Republican leadership uniting, Obama’s trade agenda would move forward with Fast Track, we believed they were wrong. We saw then the broad and diverse uprising that was developing and wrote that the people would stop  corporate trade. We have not fully achieved that goal yet, but success is within reach and we had a major victory last week.

The Fear of Revolt is Evident

This week a billionaire who owns the parent company of Cartier Jewelry admitted at the Financial Times Business of Luxury Summit in Monaco that the prospect of the poor rising up ‘keeps him awake at night.’ He believes such a revolt could be imminent.  People can see how austerity politics is destroying food, water, housing, healthcare, criminal justice, income and wealth among so many other aspects of life.

And, the elites also see the revolts, whether it is people standing together to defend homeowners facing eviction or foreclosure, or #BlackLivesMatter rightful rage against police violence, or climate justice protesters marching in St. Paul, protesting at a governor’s home in Massachusetts, blocking Shell Arctic drilling or protesting at public meetings. . . every week there are protests like these and more. The elites are aware. They know we are in the midst of revolt.

They fear these protests uniting into a movement of movements as we have seen in the campaign against the Obama trade agenda. They wonder if the upcoming climate talks in Paris will be another Battle of Seattle protest.  They know the history of protest makes a difference, just as some this week remembered the ACT UP protests 25 years ago that changed the way the nation dealt with AIDS. Over and over the elites have seen protests work.

They also see people uniting like this Summit that brings together 25 Indigenous Nations for resistance, or this activist who describes how he learned how what the power structure called weaknesses were really strengths, e.g. “a sense of solidarity, compassion, a merging of the mind and the body, learning and willing to take risks, embracing passion, connecting knowledge to power, and being attentive to the injuries of others and embracing a sense of social justice.”

They also see people talking about the economy as a “commons” where we all benefit and share to build economic and environmental security for all. All of this, and more, adds up to people realizing they have collective power that can overcome the abuse and greed of the extreme wealthy.  Billionaire’s should have a hard time sleeping at night because, as Chris Hedges writes, the revolt is coming.

We are returning to Capitol Hill Monday to maintain our presence there and continue the work to stop Fast Track. We will start with a big protest to greet Members as they return. Please join us if you can make it to DC. We need to be loud!

If you can’t make it, please call your Member of Congress and tell her or him to vote “No” on TAA.

And please make a donation to Popular Resistance to help cover the costs of this action. CLICK HERE TO DONATE.

We will do all that we can to stop Fast Track and to keep you informed. Follow us on Facebook and on twitter using #RiggedTradeRebellion and #StopFastTrack.