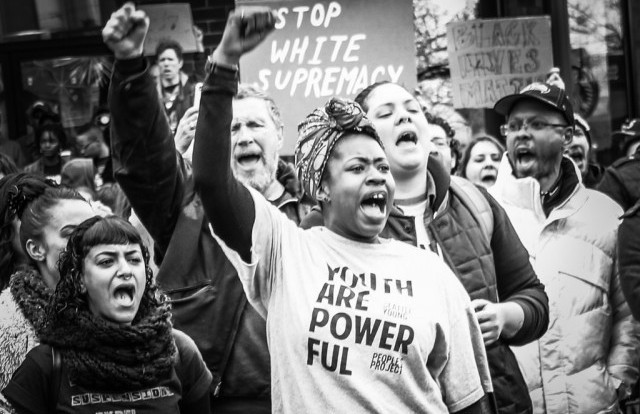 This month is Black History Month, first celebrated as Black History Week in 1926 as a result of the efforts of African-American historian, Carter Godwin Woodson. Goodwin picked a week in February because both Abraham Lincoln and Frederick Douglas were born on February 12 and 14, even though he believed that people needed to be educated about the multitude of African Americans who have contributed to history, as change comes from the bottom up.

This year during the Super Bowl, Beyoncé paid tribute to previous black activists noting that today’s movements are built on their work. The Black Lives Matter rallying cry has also put nationwide attention on the tremendous work of the Black Panthers and Malcolm X.  The audience was the third largest in television viewing history, 111.9 million people peaking at the half-time show with 115. 5 million viewers, along with a record 1.4 million viewers per minute watching on livestream and an uncounted number of people watching at Super Bowl parties.

Not among the viewers was the National Sheriff’s Association who boycotted the show at their national legislative meeting. They viewed the show which was about the history of black power and black culture as being anti-police. As writer Natasha Lennard said “those who would turn off the TV, are expressly refusing to listen to black voices” and are showing they are “incapable of reform” if they cannot listen.

The importance of the history of black political activism to today’s struggles is described in a book published on the 50th Anniversary of the Chicago Freedom Movement. People came to Chicago from many parts of the country in the 1960’s and joined together to create this campaign. They describe it as “the organizational collaboration between Martin Luther King’s Southern Christian Leadership Conference and Chicago’s Coordinating Council of Community Organizations headed by Al Raby.” As is so often the case, we build on each other’s work and solidarity across geographic and other areas of division to create a growing movement. In fact, during the 1960’s, Aboriginal activists from Australia traveled to the US to learn from the black nationalist movement.

Unfortunately, the Super Bowl was also a display of the super militarism and super inequality of the United States. While a major police presence is no surprise, at the Super Bowl police “dressed in military camouflage and army helmets as if prepared for urban warfare. . . riding around in new all-terrain vehicles purchased especially for the Super Bowl. . .  Sheriff’s deputies wore new green uniforms. A dozen bomb squad units, including units from other counties . . . Army humvees were everywhere . . . patrolling . . .Military police . . . with M-16 submachine guns. Army helicopters flew overhead with soldiers ready to jump on a moment’s notice. . . Federal law enforcement agencies had set up temporary communications towers . . . and a command center nearby.”

While the Super Bowl normalizes militarism, people continue to organize against it. Counter-recruitment to educate youth about the realities of the military continues. Activists continue to protest drones and wars. Of note this week is Iowa peace activist, Jessica Reznicek, facing three felonies for breaking two windows at a Northrup Grumman Facility. In Washington, DC activist Philipos Melaku-Bello has pledged to keep the 34-year long peace vigil going outside the White House. He hopes others will help him but has vowed to do it himself if necessary. Around the world, US bases are being protested such as this base in Okinawa, Japan where since World War II people have been treated as disposable. Not everyone accepts US militarism as the norm, many continue to protest it.

The Super Bowl’s super inequality – the $4,800 tickets to the game, the lavish parties and an economic impact of more than a billion dollars – stands in stark contrast to the homelessness in San Francisco and highlights the extreme economic inequality of the United States. Sharat G. Lin writes: “’Super inequality’ was the target of protests near Levi’s Stadium and in downtown San José, where demonstrators chanted that ‘the Super Bowl’s pockets are lined with gold.’ Marching around Super Bowl festivities in Plaza de César Chávez, they called for some of the money to be used to solve the homeless crisis and to address poverty and urgent social issues.”

In Southern California, on Monday, more than 1,000 people are expected to protest the Obama trade summit at Rancho Mirage over issues of deportations and ‘trade’ treaties like the TransPacific Partnership (TPP) that widen the wealth divide and attack worker rights all over the world. This is one of many actions being taken to protest the TPP this month, and they are having a positive impact.

This week there were more reports of police abuse and spying.

In New York people were outraged over the NYPD kicking people out of their homes using a 1970’s era nuisance law almost solely in communities of color without anyone being convicted of a crime. Also in New York leaked police union documents showed that the city had agreed to cover up police abuse. This week it also was revealed that the NYPD has been secretly spying on cell phones since 2008.

Finally, this week the perversion of “justice” was highlighted in a case where Manhattan District Attorney Cy Vance, who has been harsh on protesters, dropped the manslaughter charge against the ex-con son of a well-connected NYPD family who was caught on video driving onto a sidewalk while texting before striking and killing an outspoken civil rights activist, then fleeing the scene on foot and evading police for more than two months, all while he was on parole after serving a three-year prison stint on drug charges.

In Ferguson, the city council refused to accept a Department of Justice plan to clean up the constitutional violations and racial discrimination of their police and courts. The DOJ will now be taking them to court.

In Denver, a police manual was leaked that showed how police handle protesters. The manual describes that platoons of undercover teams join a protest to identify “leaders” and then arrest teams target those people for arrest with selectively enforced laws like obstruction of streets or assault, charges which are often dropped afterwards. The manual also authorizes coercive techniques known as “pain compliance techniques” which involves twisting of fingers, hands and other parts of the body to induce pain and compliance.

The death of 16-year-old Glynna McMillen is bringing attention to the disproportionate detention and incarceration of young black women and the violence against them.

In the white dominated United States there is a longstanding fear among many when blacks stand up for themselves, build their own communities and create mutual aid to protect themselves from economic injustice and police violence. There is no reason for whites to fear the black and proud movement. Indeed, everyone should rejoice in it. Black pride is not a threat to other races, it is the building up of African Americans who have been pushed down throughout the 600-year history since the slave trade began.

This month highlights the necessity of understanding this past history, what people have endured and how they worked to end injustices. Chris Hedges writes that “… if we lose touch with the wisdom of the past, we cannot rebel. And if we do not rebel we will sustain a system that will ultimately slay us.”

That oppression continues today and is manifested in many ways. The failure to protect the children of Flint, Michigan is raising awareness that not only is this problem widespread, but it has also been going on for a long time. Because it mostly impacted poor communities of color, the public health mobilization that could of prevented the damage didn’t happen.

We face another crisis today that could lead to greater injustice to poor communities of color if false solutions are not recognized for what they are. One example is the use of biolfuels for energy which are displacing people from their land and driving serious violations of labor rights. This carbon intensive energy is supplanting cleaner and more sustainable sources of energy such as wind and solar.

In Baltimore, a community is fighting to stop a giant trash incinerator that Governor O’Malley tried to pass off as a clean power plant and instead build a solar farm that would provide high quality jobs, which are desperately needed in the area. After years of trying other methods, the community is now suing the company, Energy Answers, for violating the Clean Air Act.

Standing up should be seen as healing, of building pride in community and recognizing the historic advances blacks have brought that benefit all. Whites need to face up to a history of deprivation brought on black communities and join in understanding the importance of black history and how activists continue to build a better world today.