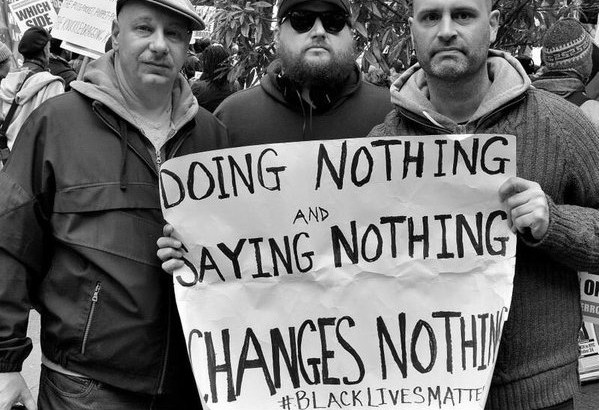 Newsletter – Chipping Away At The System

Above: A sign held at the #RiseUpOctober protest in New York City: Doing Nothing, Saying Nothing, Changes Nothing on Oct 24, 2015 by Ted Alexandro.

The forces that work to maintain the status quo, to protect the oppressors and the profiteers, are powerful, but everywhere there are people chipping away at the pillars that prop up the current systems, exposing truths and forcing changes.  This week, we highlight some of these struggles with the hope that we will learn from them.

The tide is shifting on mass incarceration

The United States is a world leader in incarceration of its people with 1.5 million people in jail, a roughly 500% increase over the past 30 years. Although 12% of the total population is black, they are 36% of the incarcerated population. The tide is shifting due to increased awareness and pressure both inside and outside prisons by activists. There has been a slow but steady decline in the prison population for the past few years.

Mass incarceration begins with abusive policing especially in communities of color. In addition to mass arrests, police violence is common. This week #RiseUpOctober protested over several days in New York, first calling for Rikers Island to be closed and the second day calling for an end to police violence. Arrests of nonviolent protesters were made on both days. In Chicago hundreds protested outside of the meeting of the US chiefs of police and 66 were arrested.

On Wednesday, law enforcement officers including police chiefs from some of the most abusive cities announced a new coalition focused on ending mass incarceration. This is a positive sign, but it is a good idea to be wary of this effort and to make sure that the movement to end mass incarceration continues to demand policies that reflect what our communities support.

On Thursday, the Federal Communications Commission voted to lower the cost of phone calls from prison, a positive step to end the exploitation of families with incarcerated loved ones. For Michigan political prisoner Rev. Edward Pinkney, who should not even be incarcerated, phone calls to the prison are working to improve his conditions. His supporters ask you to keep the pressure up!

In New York, activists with PROP (Police Reform Organizing Project) found a unique way to raise awareness in a privileged community of the police harassment they face regularly. We recommend that this be repeated around the country.

In Baltimore, youth occupied City Hall to protest the new police chief, Kevin Davis. The commercial media, not surprisingly, is not reporting on their demands. The media is also relatively silent about the string of arson targeting black churches in St. Louis, which now number seven churches within a few weeks.

One outlet, The Guardian, is doing an exemplary job of investigating the warehouse in Chicago called Homan Square where thousands of prisoners were ‘disappeared.’ The Guardian sued to obtain information for their report. And Drew Franklin has an excellent piece on Teach For America’s insidious work in the Black Lives Matter movement in Ferguson and their propaganda machine that hides their drive to privatize schools everywhere.

Fighting back when public services under attack

It is not only public education that is being dismantled and privatized. Everything from our water to the postal service, transportation, health care, housing and prisons are being turned into commodities for profit. This trend will accelerate and privatization will become permanent if the three international treaties currently under negotiation become law.

This week, a group of non-profits and unions in the European Union released a report explaining how agreements like the TransAtlantic Trade and Investment Partnership (TTIP) are being written under the influence of corporate lobbyists who are preying on public services.  TTIP negotiators met in Miami this week. Leaked text from the meeting shows that the TTIP also lacks any binding environmental protection.

The treaties provide greater power to corporations to protect their rights, but will make protecting human rights more difficult. In fact, the TransPacific Partnership (TPP), which is the closest of the three treaties to being finalized, is also being used as a weapon of war.

The Obama administration is ramping up its propaganda machine to sell the TPP to the US public. We will all have to work hard to counter their spin. Dean Baker unravels the latest lies. And in this article, we explain the politics of the TPP and what we must do to stop it. We are organizing a major mobilization in DC in November to protest the TPP and other treaties. Click here for more information and to get involved. Here are two steps you can take:

Support this mobilization with a donation. For a donation of $25 or more, we will send you this Stop the TPP T-shirt.

The climate crisis will not be solved by corporate lobbyists

Another treaty under negotiation is the new climate agreement which will be presented at the COP21 meetings in Paris this December. A new report from Carbon Tracker reveals the greenwashing going on by large corporations pushing non-solutions. This is essential to understand because we don’t have much time to take serious action to mitigate the harm that the climate crisis is causing. We can’t afford to mess it up again.

It was funny in a sad way to hear Hillary Clinton describe in the Democratic Debate how she and President Obama ‘saved’ the climate talks in Copenhagen in 2009. The reality is that the US tried to strong-arm other countries into adopting a market-based and non-binding agreement.

The Obama administration has been very disappointing when it comes to national energy policy. This week, environmental justice groups criticized the Environmental Protection Agency’s new plan saying it will perpetuate discrimination against low income communities that are burdened with pollution.

Chris Hedges writes, in “Death by Fracking,” that change will have to come from below through resistance to the projects that threaten the health and safety of our communities and our chance for a livable future. And in fact, the growing resistance to oil and gas infrastructure is working. A new survey of the gas industry finds that public opposition is the biggest obstacle for new projects.

There is more good news. In Europe, Greenhouse Gas (GHG) emissions are at the lowest level ever recorded and there have not been any negative impacts on the economy. A report released this week in the US shows that transitioning to a clean energy economy is not only good for the climate, but it also creates jobs and saves money.

Gar Alperovitz recently responded to Sanders’ platform based on democratic socialism writing that because of the immense power of industry lobbyists, we need a new economy in the US that is more decentralized, empowers workers and builds community ownership of wealth. This is the opposite of what happens when companies like Amazon, as Stacy Mitchell describes, come into communities and extract wealth. Or of what happens in companies like B & H in New York that exploit and steal wages from workers.

We can build this new economy in part by supporting community banks and credit unions that invest in local businesses. Here is a tool to find them. Local banks support their communities in many ways, unlike predatory big banks.

In a disturbing trend, because of Dodd-Frank, local banks and credit unions are disappearing. Ellen Brown tells us that building public banks that partner with local institutions can save them. North Dakota, the only state with a public bank, has the strongest local banking system in the United States. Perhaps as we build public banks, we can also start to hold CEOs from the big banks that trashed our economy accountable as they are doing in Iceland.

Those of you who have been with us since the days in Freedom Plaza will remember Dennis Trainor, Jr. He produced the OccuDoc “American Autumn” and had an online video series, Acronym TV. For a while he produced the Resistance Report for Popular Resistance. He’s back producing Acronym TV (“What do you stand for?”). Here are a few episodes. Welcome back, Dennis!

Another series we are following is Abby Martin’s “Empire Files” which look at US Empire, a topic never discussed in US media, from various angles. This week Abby interviews Noam Chomsky who discusses the extravaganza: the election of the president of the Empire.

A third video series we regularly publish is Act Out! by Eleanor Goldfield. She’s done 34 weekly episodes so far and she covers people who work in the movement, hot issues where you can take action and often includes some spoken word about issues we should be considering.

You can see these videos under Resistance Report on Popular Resistance.

It is essential that we use the tools we have – our own media, the legal system and organized and mobilized resistance – to continue to expose truth, fight injustice and create new systems that build the world we need. Together, are a powerful force.