Above: Telephone Road in Houston, August 27, 2017, during Hurrican Harvey floods.  By Thomas B. Shea for AFP-Getty

Climate breakdown, as George Monbiot calls it, is happening before our eyes at the same time the science on climate change grows stronger and has wider acceptance. Hurricane Harvey, which struck at the center of the petroleum industry – the heart of climate denialism – provided a glimpse of the new normal of climate crisis-induced events. In Asia, this week the climate message was even stronger where at least 1,200 people died and 41 million were impacted. By 2050, one billion people could be displaced by climate crises.

Climate disasters demonstrate the immense failure of government at all levels. The world has known about the likely disastrous impacts of climate change for decades. Next year will be the thirtieth anniversary of the Intergovernmental Panel on Climate Change (IPCC), which  operates under the auspices of the United Nations and was founded in 1988. The IPCC published the first of five reports in 1990. Thousands of scientists and other experts write and review the reports and 120 countries participate in the process. The most common surprises in successive reports are more rapid temperature increases and greater impacts than scientists had predicted. 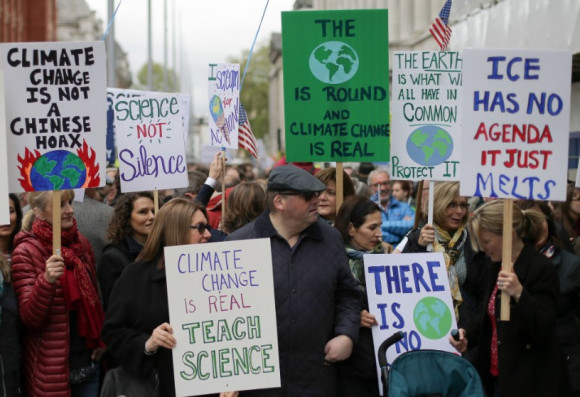 The science on climate change has become extremely strong as the final draft of the U.S. Global Change Research Program’s Climate Science Special Report showed. The document was leaked last month because scientists feared the Trump administration would amend, suppress or destroy it. The report describes overwhelming evidence of man-made climate change impacting us right now and the urgent need to get to zero net carbon emissions.

It is not just science that confirms the climate crisis, it is also people’s experience with extreme weather, constant record breaking temperatures, and deadly heat waves as well as collapsing mountains in Alaska, the shrinking Colorado River and an ice free Arctic as a few examples. People have experienced a series of extreme storms – Hurricanes Harvey, Katrina and Sandy being the most notable this century –droughts, fires and other physical evidence that make it hard to deny climate catastrophe. Climate denialism requires shutting one’s eyes to obvious realities when the truth is the Earth is warmer than it has been in 120,000 years.

There is no doubt that these storms are made more deadly by climate change. Harvey was a tropical storm until it went over the warm Gulf of Mexico and grew into a hurricane with record rainfall. Climate expert Michael Mann explains that warmer water resulted in greater moisture being absorbed, more rain and more flooding. Sea level rise added to the greater flooding. The stalling of the storm over Houston was also predicted by climate forecasters because the jet stream pattern has changed. Climate change had the same effects on Hurricane Sandy in New York City.

Science is denied because many profit from the dirty energy status quo and denying or even hiding the existence of climate change. There is litigation against oil and gas companies and an SEC investgation because records show they knew their products were causing climate change going back to the 70s but funded research to hide reality.  ExxonMobil is being sued by shareholders for misleading investors and faces shareholder challenges. Coastal communities are suing dozens of oil and gas companies for continuing to pollute after they knew the damage they were doing. Former ExxonMobil CEO Rex Tillerson, now the Secretary of State, used a fake email account to discuss climate change and many of those emails are now missing. Youth suing over the destruction of their environment and climate change are seeking Tillerson’s testimony and emails. There are many climate criminals to point to with the dirty energy companies at the top of the list. There are 100 companies responsible for 71 percent of green house gas emissions. Good government would hold them responsible. 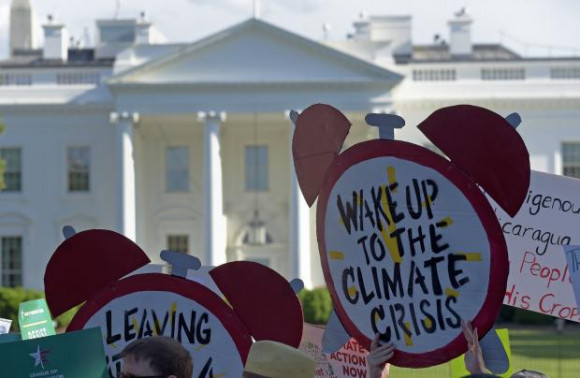 Climate protesters outside of White House. Photo by Susan Walsh for AP.

The three decade life of the IPCC has coincided with deep corruption of government by the energy industry, sprawl developers and other dirty energy profiteers. The anti-science movement in the United States, which includes government officials, industry and others who deny climate change exists, provides cover for elected officials to do nothing or act inadequately on the urgent reality of climate chaos so that corporations continue to threaten the planet.

The United States elected a climate denier, Donald Trump, who describes climate change as a hoax and has appointed officials who are complicit in denying climate change, closely tied to polluting industries and favor policies that result in climate breakdown, and many of whom were part of the misinformation network on climate. Trump has withdrawn from the Paris climate agreement, putting the US out of step with the world on the issue. The Trump administration has sought to hide evidence of climate change, but people have been sharing climate documents with other governments and scientific groups before he hid them. Thirteen cities joined together to publish Trump-deleted climate data. Trump has conducted a witch hunt against believers in climate change. These actions have resulted in the unusual step of climate scientists protesting the Trump administration.

But, even presidents who recognize climate change reality have not taken action to confront it.  Unlike Trump, President Obama played a more hidden hand in his undermining of climate policy. His energy strategy favored “all of the above” energy including oil and gas and his office approved carbon infrastructure and off-shore drilling. Obama showed dirty energy extraction is a bi-partisan concern, as Alison Rose Levy clearly reminds us. Obama undermined the 2009 Copenhagen climate accord and weakened the Paris agreement. He was preceded by the marinated in oil Bush-Cheney administration. Those two administrations wasted 16 years of critical time to respond to climate change.

Federal decisions had local impacts as can be seen in Houston, the fourth largest city. The federal government inadequately regulated superfund sites, pollution from oil refineries and chemical plants in the area. These were all part of “Cancer Alley” or the “Chemical Coast” – names used to describe the petrochemical capital of the United States. When flooding came, so did disaster in these areas. A  1.5 mile radius around one chemical plant had to be evacuated and toxic waste sites flooded.  Of course, the environmental racism that led to these dangerous polluters being put in poor neighborhoods, usually communities of color, is now resulting in massive pollution in those areas and will cause health problems.

But inadequate response to climate change often includes state and local governments (some states and cities are taking positive steps). Texas is an example of decades of failed government as it has taken no action to adapt to climate change over the last three decades. Bills were introduced to do so but the legislature failed to act. Why? Because the laws included the words “climate change,” e.g. calling for a “climate change vulnerability assessment” and were perceived as a threat to the oil and gas industry.

The metropolitan area of Houston contains 6.5 million people over urban sprawl the size of New Jersey. Zoning regulations allowed for unregulated growth, even in areas prone to flooding, creating a large population on a flood plain. The area has had a long relationship with the petrochemical industry which has been able to get its way, but being business friendly to the industry is going to become very costly. The city is sinking at 2.2 inches a year in large part because of oil and water being pumped from under it.

The failure to act on climate for the last three decades also means that government will spend more as each crisis has multi-hundred million or even multi-billion dollar costs. In addition, people today are leaving a bill of hundreds of trillions of dollars to future generations. It would be much less expensive if government acted responsibly and put in place infrastructure and technology to adapt to climate change as well as to ameliorate it now. The disaster in Houston is an opportunity to make those changes.

The historic failure of government action on climate change shows a fatal flaw in a representative democracy that is based on the corruption of big business money and serves the corporate interests who profit from the flawed status quo. 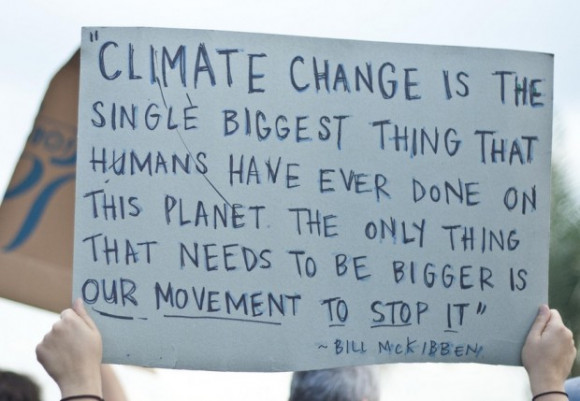 People Rise to the Challenge

Throughout much of this history, particularly in the 21st Century, people have been challenging the dominance of the oil, gas and coal industries and pushing government to confront climate change.

Even before Trump came into office, there were massive protests during the Obama administration against the TransCanada Keystone XL pipeline, the Dakota Access Pipeline and other carbon infrastructure throughout the country.  People protested the Federal Energy Regulatory Commission (FERC), which is an arm of the oil and gas industry disguised as a federal agency. Obama’s FERC commissioners were a rubber stamp for the industry, now, Trump’s FERC continues the practice.

People were escalating actions during the Obama era saying the time for direct action on climate change is now. Protests were on an upswing before Trump was elected. Last September, Bill McKibben recalculated the climate math showing how time was running out.

From the first day of the Trump administration people were taking action. Climate activists blockaded Trump’s inauguration making it more difficult for people to attend. In addition to protests against specific carbon energy products, people mobilized for #DayAgainstDenial Protests across U.S. to call attention to climate change.

There is widespread climate change action, which is ‘unstoppable’ despite Trump’s policies. In fact, Trump’s presidency may be leading to an escalation in movement action as people know we can no longer hope to win by simply voting or speaking out. People are showing they are willing to risk going to jail for a livable future. And, we have begun to see cases where juries are not willing to convict people for climate change protests.

Climate change affects each of us and is an issue that unites us. When crisis hits, we need to act as a community in mutual aid of each other. Those community relationships can be built now so we are ready in times of crisis.

The only way we can mitigate and adapt to climate breakdown is by working together toward the common goals of reducing our carbon footprint, moving to a net zero carbon energy economy as soon as possible and putting in place the infrastructure needed to adapt to the climate crisis.