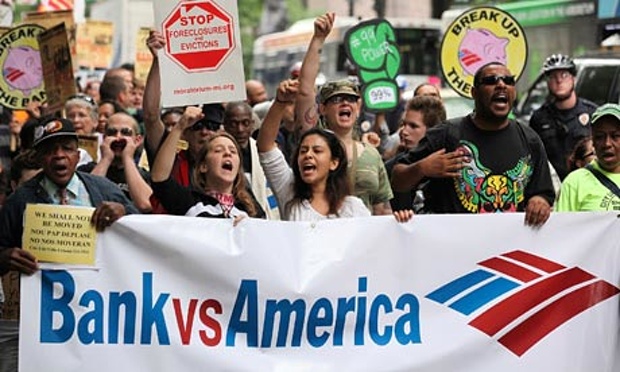 How do we fight for what we want and need; to protect the planet; and to ensure justice for all, when we are confronting an oligarchy?

People in the US are taught that the way to create change is through voting. But in reality, voting in the US is very limited and ineffective. In an article, “Don’t Count on Elections: Organize or Die” the authors examine the myriad of ways that elections fail to create change; how they are designed to place a middleman, your representative, between you and the change you want  and how elections tend to reinforce the status quo rather than change it. They point to South Carolina where there have been numerous attempts to rid the state of the Confederate Flag, but it was not until an activist climbed up a flag pole and took it down, that the government finally acted. Direct action, at the right moment, was more powerful than elections.

Reining in the Big Banks

The disparity between what voters want and what elected officials vote for was documented in a working paper published this week that examined plutocracy in wealthy nations. They found the United States has the largest gap between rich and poor on social spending of any nation; and that if the people ruled and their views were put into place, social spending would be 40% higher than it currently is.  With such a disparity between what elected officials do and what the people want, it is surprising the government continues to have any legitimacy.

But, that does not mean that the wealthy always win. The fear of lost legitimacy, of pulling the veil off and showing the reality of a government that fails to represent the people, is greatly feared. We actually have many tools with which to push policy in our direction and the movement is getting more effective at using them. Our strength is growing as more people mobilize and as more of us learn the realities of our failed economy and how to confront the deep corruption.

During the 2008 collapse the banks were bailed out with trillions of dollars from the Treasury Department and the Federal Reserve. Only now is the public beginning to fully understand how deep the corruption was. While in the US there have been  massive fines from settlements with the Department of Justice and Securities and Exchange Commission, there has been almost no criminal prosecution for financial fraud. So the banks won the first round, but out of that experience we can win future rounds. One example is Iceland which took a different approach than Europe and the United States – it prosecuted and jailed the heads of the country’s biggest banks, along with 23 of their lieutenants; and it bailed out the people rather than the banks. The bottom line lesson was: “To avoid further crises with huge tragic social costs, we have an urgent task to bring finance back under democratic control, to reconfigure society’s relation to finance capital, indeed, to Capital itself.”

A group of finance whistleblowers are attempting to bring finance under democratic control. The Bank Whistleblowers United is seeking to hold bankers personally responsible and to make urgent changes to prevent harm from a future financial crisis. They put forward a 19-point plan that could be instituted through executive action within 60 days. They are seeking pledges from candidates in support of the plan.

Three weeks ago this newsletter examined the weaknesses in the foundation of the US economy and the likelihood of collapse, then described an ‘after the crash’ program of re-making the finance system. The program is based on what people have learned about alternative finance systems that have been shown to work. This knowledge gives us greater power to overcome the plutocracy.

The movement is currently in the midst of a campaign to stop the Trans-Pacific Partnership, the first of Obama’s three massive corporate ‘trade’ agreements. The campaign is showing new energy and expansion with the TPP supporters facing protests almost everywhere. When the United States and other TPP countries sign the agreement on February 4 in New Zealand, there will be more than 30 cities protesting in the United States along with cities in Argentina, Canada, Chile, Peru and New Zealand. You can sign up here to either create a protest in your community or join an existing protest.

The TPP campaign has learned from successful campaigns to stop previous trade agreements. For example, another large trade agreement, the Free Trade Area of Americas (FTAA), meant to span all of North and Latin America, was defeated in 2005. The TPP campaign has learned from the FTAA and other successful efforts to stop trade agreements. The actions on February 4 will be followed by actions targeting members of Congress when they are home from February 14 to 21. And the next mass mobilization is already being planned.

We can, and we must, stop the TPP. Take the pledge and join the movement. There is something for everyone to do. Click here.

This week there were two significant victories in criminal justice reform that were brought on by the movement. The US Department of Justice reached an agreement with Ferguson that will stop their abusive policing-for-profit practices. It will change the practices of the police and the municipal court. It will also change training of police and ensure police are held accountable for their actions.

There is no question that the Ferguson result would not have occurred without the tremendous protests of the #BlackLivesMatter movement in Ferguson and nationally, but the movement was also essential to the solitary confinement reforms. It was won through a broad movement of street activists, prison hunger strikes, prison reform organizations, civil liberties groups and researchers. The dramatic reduction in solitary confinement would not have occurred without a movement that was strategic and aggressive.

The lessons from these victories should be learned, copied or modified for other campaigns. Currently the campaign in Flint for safe water, which is now becoming a national campaign (see also this report from Jackson, MS), is doing excellent work in drawing attention to the human rights violations they have suffered. They have also made a demand for democracy and are not allowing the state to remove their elected representatives. Like poisoned water, this is an issue impacting other cities too, e.g. Atlantic City.

An even bigger water crisis that has been unchecked for decades should also draw national attention. It greatly impacts the Northern Great Plains through the West, polluting major rivers and aquifers with radiation from uranium and other metals; but it also spreads toxins nationally through the air, water and food. There are 15,000 abandoned uranium mines that need to be cleaned up, as well as the uranium-laced coal that travels across the nation from Wyoming and is burned in coal-fired power plants that do not monitor for radiation. High cancer rates are being found in the Western states that are most impacted, and radioactivity is being found in coal ash after it is burned. This invisible national health catastrophe – a secret Fukushima – needs the attention of activists across the country.

A Year of Resistance

In additions to predictions of economic collapse in 2016, people are predicting a year of protests larger than 2011. We view it as a continuation of protests from the awakening of the Arab Spring, Wisconsin Uprising, Indignado Movement in Spain and the Occupy Movement in the United States. This resistance has evolved into a diverse movement for economic, racial and environmental justice and has continued to grow – despite the media saying it has disappeared.

And, not only are protests growing, but they are learning from their experience and the experience of past protest eras. Reverend Barber this week wrote about 14 steps the Moral Monday Movement learned from their experiences. Barber knows that no single organization can build the movement. We need it to spread from community to community, state to state and even nation to nation.

To build a movement, we must build relationships. Relationship building is building our base so that we do not just speak rhetorically about justice issues, but can act together to create justice.  When new people join a movement, they infuse it with new ideas, new energy and new leadership.To attract new people we must meet them “where they are, and building forward from that place – the barbershop, the salon, the laundromat, the doorway – where we come together as people and have a conversation.”

How do we win? A new book that describes 21st Century activism and how it is transforming the world. says it in its title “When we fight. We win.”  How do we achieve transformative organizing:

“When we fight, we often move ourselves out of our comfort zones to face forces and people that view the world differently and may not be ready to change. When we fight – building an organization, joining a community of activists – we win not only communal victories but also our own personal transformation, enabling us to discover common root causes to problems that had seemed unconnected before. Understanding root causes can ally us with others – across issues, cultures, identities. This aggregates individual fights into broad movement struggles, and by working in solidarity together we can realize far-reaching, systemic change.”

In fact, this is what we have seen during our work for economic, racial and environmental justice. We saw it in our early work before Occupy, but when the explosion of Occupy occurred we saw an awakening that has continued to lead to transformative change. The movement continues to win victories, large and small, and continues to mobilize for the transformative change we know is needed. In 2016, we will once again see an electoral system that does not respond and the movement’s growth will be spurred again. The year of protest is here.