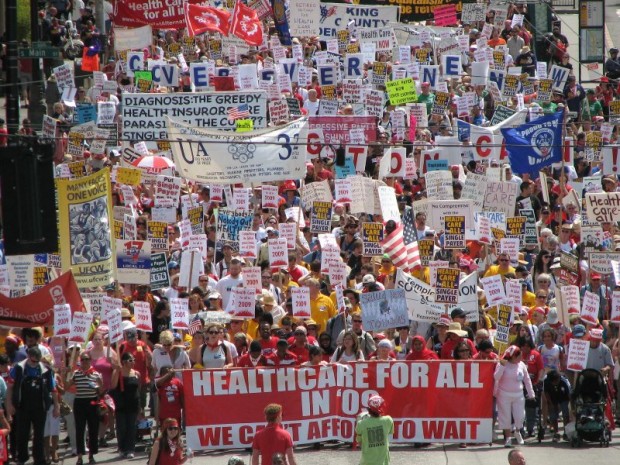 ‘Progressive’ senators and organizations launched an effort to revive the ‘public option’ this week to salvage the so-called Affordable Care Act (ACA). Don’t be fooled by the false label — this will benefit the healthcare profiteers, not the people.

It is critical, if we are to solve the ongoing healthcare crisis in the US, that we are not fooled by what is actually the Profiteer’s Option that will be another gift to the insurance industry. We must unite instead and fight, just as we fight to stop pipelines and the Trans-Pacific Partnership, for the solution, national improved Medicare for All, a single payer system that nearly two-thirds of people in the US support.

The Affordable Care Act Is Failing

Although there has been a lot of hype saying that the Affordable Care Act would bring “universal” and “affordable” healthcare to people in the United States, experience and principles of health policy indicated from the beginning that this was false. There was so much money and energy invested in the false narrative that it was difficult for people to hear the truth. But now, six years later, the truth is being revealed. The ACA is failing and members of Congress are scrambling to fix it in a way that props up the profits of their campaign donors.

As The Polemicist writes:

“Obamacare was not designed to, and does not, provide healthcare to anyone. The subsidies it pays go to health insurance companies; not to doctors or patients. It does not, and cannot, ensure universal healthcare coverage. It can only enhance “access” to healthcare—which means actually forcing everyone to purchase whatever profitable insurance plans the private companies decide to provide, at whatever price they decide to charge.”

The premise of the ACA was to expand Medicaid coverage for the poor, continue Medicare coverage for the elderly and force the rest of the population, mostly healthy and working class, to purchase private health insurance with taxpayer subsidies. It has been a massive transfer of tax dollars into the coffers of the private insurers. On top of that, the federal government underwrote the private insurers so they would not be burdened too heavily by paying for care (most private insurers are investor-owned and have a legal obligation to yield the greatest profits possible for their investors).

In return, private insurers were obligated to offer policies to everyone who wanted one regardless of their health status. But they found a way to get around this by creating ultra-narrow networks, which excluded most of the health providers in a community such as major medical centers where patients go when they have serious health problems. Patients who seek care out-of-network must cover the costs of that care on their own. The result is that more people have health insurance, but they still can’t afford the care they need because of high out-of-pocket costs.

Even with a massive injection of public dollars into private insurance company pockets, the insurers are not satisfied. They are pulling out of markets where they aren’t making enough profits and raising their premiums by double-digits. Aetna announced this summer that it would pull out of 500 counties. This is partly in retaliation for the rejection of its plan to take over Humana. And in Maryland, where we live, Blue Cross (a not-for-profit insurer) is raising premiums by 25% and 31%. This will leave more people struggling to find and afford health insurance.

Protecting the Profits of Insurers

A reasonable person might think that the solution would be to finally move to a healthcare system like those in most other industrialized nations, a form of improved Medicare for All. Over 80% of Democratic voters and a majority of the public are in favor of this solution. But the insurers are not about to relinquish the massive subsidies they are receiving. Instead, they need an outlet for the enrollees that actually require care. They need a public insurance to cover the sick patients so they can cover the healthy patients who pay premiums but rarely require care above the deductible they have to pay before their coverage kicks in.

Enter, the ‘public option’ – a public health insurance. Experience at the state level has shown that this forms of public insurance is simply a relief valves for private insurers and will fail over time from the financial stress of paying for care.

A ‘public option’ adds one more insurance to our complex system that already has too many insurers. The only way to control healthcare costs is to reduce bureaucracy by adopting a single payer system. While this is sold to us as a step toward single payer, that is false propaganda. The public option is really the Profiteer’s Option.

So, if you are the Democrats and you need to fool the public into believing that the Profiteer’s Option is a solution, whom would you choose as your messenger? Bernie Sanders of course. He has been a long time proponent of Medicare for All and so he has the credibility to convince people that they should support it. That is why he and other ‘progressive senators’ introduced legislation to create a Profiteer’s Option. All of the Democratic front group organizations are lining up behind it.

SPECIAL NOTICE: Dennis Trainor, Jr., producer of “American Autumn: An OccuDoc,” has a special offer for the 5th anniversary of the Occupy Movement. He is offering a digital version of the film on a pay what you can basis. The proceeds will go towards supporting our work at Popular Resistance and his next feature film (When We Were Capitalists). Dennis played a key role in organizing the occupation of Washington, DC in October, 2011.

Here is an excerpt from the film featuring Margaret Flowers and health care.

The Fight for Health Care Continues

We must not be fooled. The movement must tell others the truth about the Profiteer’s Option so they do not believe the propaganda. Those who want high quality healthcare for all must not waste their time supporting the Profiteer’s Option, they need to demand what the country really needs — improved Medicare for All, a single payer system. If insurance companies cannot make enough money when people are forced by federal law to buy their inadequate insurance and where the federal government provides more than $100 billion in subsidies annually for the insurance industry then it is obvious the insurance-based system cannot work.

Instead of expanding publicly-funded healthcare, the bi-partisans in Washington, who serve the investors who donate to their campaigns, are seeking to shrink or privatize existing public programs including Medicaid which is now being privately managed in many states, Medicare where the insurance system, Medicare Advantage, continues to grow despite it costing more and undermining traditional Medicare and with the Veteran’s Administration.

While the media focuses on the problems of the Veterans Administration, the truth is the VA provides better health services than the insurance-based healthcare. The wars bring hundreds of thousands of veterans into the VA, but the government underfunds it and creates a situation where the VA cannot keep up with the needs of veterans. By creating an untenable situation for the VA, it allows for privatization propaganda to grow. Wall Street investors are licking their lips imagining turning a public health service into private profits, turning veteran’s healthcare into a commodity. VA employees and veterans are fighting back because they know a privatized system will not serve them, but will serve healthcare profiteers.

The demand for a single payer system built on an improved Medicare for all will not go away. Obamacare has created an unjust system of healthcare. It divides people’s coverage based on their wealth and especially gives working class and poor people inadequate health coverage. It still leaves 29 million uninsured — even though people are forced to buy overpriced insurance with inadequate coverage. Healthcare injustice ensures that the movement for single payer will grow.

Many point to the Scandinavian countries as an example of a successful health and social safety nets. A popular book to understand this is The Nordic Theory of Everything. And, there is no doubt based on various measurements that the people of Scandinavia have happier and more stable lives where healthcare is easily available. But, their more secure life style did not happen on its own, it took great struggle by the people to be educated, organized and mobilized to demand the changes they needed.

There are many fronts of struggle today and healthcare needs to become a bigger and more militant one. Prisoners are standing up across the country in a nationwide prison strike, communities are standing up against pipelines and other carbon infrastructure, a movement of movements is challenging the TPP, as we learn more thanks to leaks, (sign up to stop the TPP in the lame duck) and there are movements for living wages and racial justice, among others.

We know we are up against a government that is corrupted by money from wealthy corporations and oligarchs,  that means we need to work together to transform the system. Healthcare, like so many of the other issues people are mobilizing around is an issue that unites us all.

An improved Medicare for all will reduce inequality, provide greater security for everyone and improve the lives of people from infancy through the elderly. We should all be working to replace the ACA with a single payer healthcare for all system – not compromising for a the false promise of a Profiteer’s Option. We need to make healthcare a human right, not just in word but in deed.