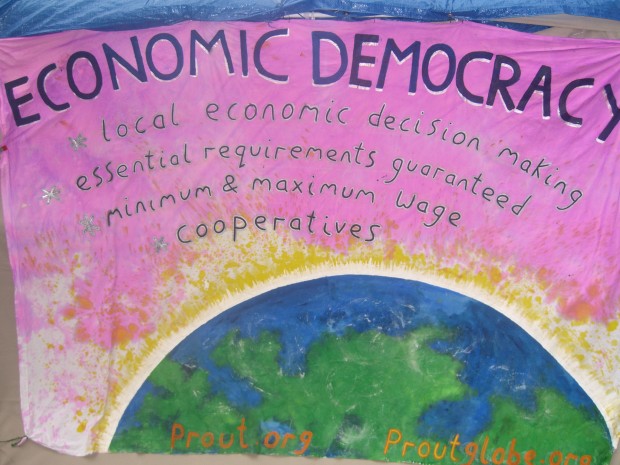 Newsletter: Economy Of The Future-Economic Democracy

This Labor Day weekend rather than looking at the history and current struggles of workers, we look to the future and imagine what will work be like in 2025 or 2050. What will the overall economy look like? What is our vision for an economy that works for the people?

The Future of Work

There are some major trends that indicate we are in the midst of a radical transformation of what work means and how people will have income.

The most significant trend involves robotics, artificial intelligence and software that will do most current jobs. The research firm Gartner predicts that “one in three jobs will be converted to software, robots and smart machines by 2025.” Oxford University researchers estimate that 47 percent of U.S. jobs could be automated by 2033.  Already the official unemployment rate hides the fact only 63% of working-age adults are actually working.

These changes are happening alongside the demise of unions and worker power; as well as globalization resulting in lost jobs and a race to the bottom of low paid workers.  Workers are already in politically and economically weak positions to survive the onslaught of robots.

It is time for these issues to rise to the top.  The transformation of jobs and what to do about them is not even discussed in the 2016 elections, other than reforms like raising poverty wages. A broader discussion is needed.

There will never be enough jobs in the future so we need a new way to ensure people have money on which to live and to keep the economy going.  It is time to figure out how to provide people with a basic income where everyone receives a single basic income to provide for a comfortable living whether they work or not. It is only intended to be enough to survive on. Social Security, although insufficient at current levels, is a model of a basic income for the elderly. Expanding and improving Social Security is one way to achieve this goal.

The basic income has been supported by people across the political spectrum. President Nixon advocated for a version of it, as did George McGovern and President Jimmy Carter. It has been supported by libertarian economists like Milton Friedman as well as progressive economists. It is the simplest way to end poverty while at the same ending the bureaucracy that surrounds poverty programs.  Its roots are in the American Revolution. In 1795, American revolutionary Thomas Paine called for a Citizen’s Dividend to all U.S. citizens “his or her natural inheritance, by the introduction of the system of landed property.”

The U.S. economy, indeed much of the world economy, is in stagnation and decay because capitalism is in a crisis. Gar Alperovitz explains: “when you concentrate all the income at the top, people don’t buy. They can’t buy enough.”  By creating a basic income and building wealth in communities and among workers, the economy will work for everyone.

There are lots of ways to pay for a basic income. First is the savings from ending the poverty bureaucracy. Other funding sources include: taxing the profit created by robots and other technology so that wealth is shared since the technology is paid for by government and at public universities.; returning to the progressive tax structure of the Eisenhower and Kennedy years so that the wealthiest pay more; and/or a micro tax of less than 1% on financial transactions. Another approach to corporate tax breaks and funding would be to turn corporate welfare into tax payer investment in which tax payers get a portion of the profits as a dividend.

Some transitional policies to ease into a post-work society include redistributing work by shortening the work week, expanding free life-long education (which is very affordable, costing each US taxpayer $33 per year), and expanding public employment to fill the desperate need for more health professionals, teachers, social workers, workers to rebuild infrastructure and more.

To create wealth among workers, worker ownership through worker cooperatives or worker self-directed enterprises need to be encouraged. This idea has been part of the economy of the United States since its founding, hidden behind the myth of individualism. In fact cooperatives are in the DNA of the United States.  Worker ownership is not only a challenge to capitalism but also a challenge to traditional state-based socialism.

Political economist Richard Wolf writes, worker ownership moves us toward economic democracy by replacing “hierarchical, top-down capitalist enterprises run by major shareholders and the boards of directors they select with a democratic enterprise directed by all its workers.” This approach also builds wealth in workers and their communities, as well as political power.

There is an explosion of worker cooperatives. Gar Alperovitz notes there are “10,000 worker-owned companies in the United States . . . 2,000 [public utilities]. Twenty-five percent of American electricity is owned by co-ops and city-owned governments.

The cooperative economy is the beginning of a transition to a people-powered economy. Multiple fronts of the movement for social, economic, racial and environmental justice should push for this transition because it affects all of these areas of injustice. Kali Akuno describes the intimate connection between capitalism and oppression and a path out through autonomous projects. Existing worker cooperatives “serve as a laboratory for reinventing our economy and many overlapping social movements are combining forces in the experiment.”

The question is how do we get there; there are a variety of paths to encourage and consider. In Maine, this year 60 employees of three retail businesses – Burnt Cove Market, V&S Variety and Pharmacy, and The Galley – banded together to buy the stores and create the largest worker cooperative in Maine and the second largest in New England. Cities can play a major role in building worker ownership as we are seeing in New York where there is a fund for worker ownership and as we were seeing in Jackson, MS when Mayor Chokwe Lumumba was elected (the work continues after his death).  We saw the beginnings of economic democracy when we organized a conference in Baltimore.  Indeed, there are efforts along those lines all over the country. The Democracy Collaborative covers community wealth building and democratic ownership of business enterprises by employees among other new economic democracy issues

Matt Stannard, Policy Director for Commonomics USA and on the Board of the Public Banking Institute, highlights three keys to moving forward:

Worker Ownership in a New Economy

This Labor Day weekend we are focusing on workers but the broader vision is for a new economy based on economic democracy.  Our economic and political systems are in crisis and new systems are needed. Geoff Gilbert and Gar Alperowitz summarize:

“Our society’s institutions are in crisis — with looming ecological collapse, historic concentration of capital, incarceration rates far beyond those of any other country, the diminishing civil liberties that come along with a permanent ‘war on terror,’ and a political process bought and paid for by the rich and powerful.”

Capitalism is just not working for most people. They started the Next System Project which is working on detailed specific proposals for how we can transition to a new economy.

There are other economic democracy projects gaining support. For example, the problems of high priced housing and gentrification are being solved through land trusts. Alperovitz explains that the basic issue is “who owns the land in a neighborhood. Many, many cities now–this used to be a very radical idea–draw a circle around land in an urban area, set up a nonprofit corporation or a city corporation, take over the land to prevent gentrification. That used to be crazy. There are hundreds of them around the country now, and they are another form of changing who gets to own the wealth. . . .”

There are also experiments to make governments more democratic – where people actually make spending decisions in their community. Participatory budgeting is a process where the people of a community decide how to spend tax dollars on capital improvements, e.g. bike paths, better lighting, developing a park. This direct democracy is part of the economic democracy many of us envision.

A lot of the new economy builds on the idea of a “commons-based economy.” Just as the air is a shared commons, as we all must breathe the same air, the water can be viewed that way.  Advocates of a commons-based economy point to three keys: ecological sustainability, open knowledge and social solidarity with significant developments in each:

“Many parts of the environmental movement seek to go beyond the standard ‘market-oriented solutions.’ There is a growing body of open source-inspired projects for software code, information, design and physical production, which is now spawning new types of global sharing of information with distributed local production. And there are many advocates and initiatives for social justice and fairness in the economy, such as cooperatives and the solidarity economy movement.”

What is needed to create this transformation begins with solidarity as we are all impacted by the unfair economy and the political corruption it creates.  In the Commons Transition project, Michael Bauwens points to a “Chamber of Commons,” and “Commons Assemblies” as tools.  Bauwens calls for “new types of cooperative finance that can support sustainable production (based on the idea of sufficiency shared by all) as well as the mutualizing of knowledge (vs. its privatization via patents and copyright) and social solidarity (to ensure just and fair distribution of any surplus value created).”

Many people are thinking this way; last summer in Richmond, CA there was an “Our Power” conference which had a big goal: connecting local, national, and international struggles of the marginalized and dispossessed to chart a “just transition” to a new economy where Mascarenhas-Swan said:

“We are here to connect our struggles for food sovereignty, zero waste, clean community power, and finding ways for people to stay rooted in neighborhood. It takes roots to weather a storm, and the storm is here.”

Just as we are working to end an extractive energy policy that exploits the land, we need to end the extractive economic policy that extracts wealth from communities and exploits workers. We can work together to build local community wealth and end poverty through economic democracy. Visit ItsOurEconomy.us to learn more.