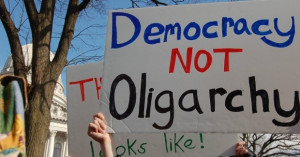 The 2016 presidential election has shown how the duopoly, the two parties that represent big business interests and the wealthiest, are corrupted in ways that prevent the people’s voices from being heard, their necessities from being met and the planet being protected from human greed.

During the campaigns, leaks have given people a behind-the-scenes look at how the parties operate and research on the candidates shows their personal failures. They give voters an understanding of elites who behave as if the law does not apply to them and who put themselves ahead of the public interest.

Last Friday was a day of embarrassment for both the Republican and Democratic Parties. A tape showing Donald Trump bragging about sexual assault in lewd ways has gotten the bulk of attention, but Wikileaks also released thousands of pages of The Podesta Emails, 2,060 emails and 170 attachments. John Podesta is the ultimate insider. He is currently the chairman of the Hillary Clinton campaign, served as a counselor to President Obama and Chief of Staff to Bill Clinton. Podesta also controls the Podesta Group, a major lobbying firm and is the Chair of the Center for American Progress, often described as the think tank for the White House.

The Clinton Campaign’s defense is to refuse to confirm or deny whether the documents are real and to blame the Russians. Among the files released were excerpts of the infamous well paid speeches of Hillary Clinton to Wall Street and other big business interests. Clinton charged a minimum of $225,000 per speech. Secretary Clinton worked hard to keep these speech transcripts secret. The document released was an email from the Clinton campaign’s research director, Tony Clark, to six Clinton campaign staff members flagging portions of speeches that presented political problems for Clinton. But, these documents show us more than political problems for the campaign, they show why people have lost faith in government and the economy and see both corrupted by the influence of money on elections.

In the documents, Clinton tells a real estate investment group that if people knew what was going on they would “get a little nervous, to say the least.  So, you need both a private and a public position.” She is saying something many people assumed and this is one reason why she is not viewed as trustworthy. No doubt this public vs. private description of reality applies broadly to politicians. People know they are often being misled and politicians are deceiving them rather than being transparent. Politicians need to serve their donors while keeping the people from revolting against them for doing so.

One of the great successes of a public and private positioning was the selling of the Affordable Care Act (ACA). The ACA was sold as a program to help the people gain affordable access to healthcare. It was not sold as a bailout to the health insurance industry or a gift to the pharmaceutical industry and to investors in for-profit hospitals and other health services.

In reality, it was a scam on the US population – or as we wrote three years ago: The Biggest Insurance Scam In History. Now, more people are seeing they were bamboozled as premiums and out-of-pocket costs are increasing and coverage is shrinking. We’re also seeing insurance companies merging into monopolies in many parts of the country and massively rising prices of pharmaceutical drugs. More people are breaking through the public marketing and seeing reality. Bill Clinton in a moment of candor described the ACA as “the craziest thing in the world.”

The Podesta Emails also include some of Hillary Clinton’s private thoughts on healthcare. Speaking in Saskatoon, Canada and Grand Rapids, MI at private meetings, Clinton praised single payer healthcare systems like in Canada and Europe. She admits that they are more efficient and produce better results. Of course, if she said that in public her big donors from the insurance, pharmaceutical and investor-based health providers would stop funding her. In public, she is quick to oppose single payer as she did in the 90’s when she was First Lady and continues to do today. Thousands of lives are lost each year due to insurance-dominated healthcare and thousands more people go bankrupt. If Clinton were not so deceptive, told the truth and pushed for the real solution – along with other elected officials – the crisis in US healthcare could be ended. If she continues to deceive, the healthcare crisis will continue. Healthcare is one example of many where corruption trumps the public interest and prevents solving a crisis for millions in the United States.

Another issue exposed in the Podesta Emails is Hillary Clinton’s close relationship with Wall Street. She tells Wall Streeters that only they can solve the problems on Wall Street, even though they were actually the cause of Wall Street corruption and the economic collapse. She talks about only holding Wall Street accountable for political reasons and says “I represented and worked with” so many on Wall Street and “did all I could to make sure they continued to prosper.” The Wikileaks confirm what people already suspected – Clinton is on the Wall Street team, she praises them, will include them in her government and will make sure they continue to prosper.

There may be a few publicity stunts to confuse people to get them to think Wall Street is being held accountable, but it will be political theater.

During her speeches to bankers, Clinton also applauded the infamous Deficit Commission that called for neoliberalism – cuts to the necessities of the people and deregulation and low crony capitalism for big business. She told them “Simpson-Bowles… put forth the right framework, namely, we have to restrain spending, we have to have adequate revenues, and we have to incentivize growth. The specifics can be negotiated and argued over. But you got to do all three.”

The corruption of elections by big money. Clinton admits “it would be impossible to run for office without raising huge amounts of money.” Clinton says she would like it to not be this way but she has no idea how to end the reality of money-dominated government. Corruption of government leads to politicians misleading the people about their donor-favoring policies because if the people knew what was really going on, we’d be very angry.

The Personal Corruption of Big Business and Political Leaders

Donald Trump, in the now infamous sexual assault video tape, explains that people like him “can do anything” and get special treatment. Bill Clinton has also shown a similar attitude when it comes to his treatment of women, but this is bigger than sexual assault. It is about the attitude of many elites in how they view themselves and treat the rest of us.

They are superior. The rules do not apply to them. They deserve special treatment because of who they are.

Donald Trump took a billion-dollar tax deduction which resulted in him not paying taxes for many years. He is not accused of doing anything illegal in fact part of his defense is that he had to take this massive tax deduction because of his fiduciary duty to his investors. His most outspoken surrogate, Rudy Giuliani, says that he knows many people who have taken similar deductions, indeed much larger ones.

This is one of many laws embedded in the tax code that allows major corporations and wealthy individuals to dodge paying their share of taxes. As Trump told Clinton, if she does not like it, she should have changed the law. Of course, because of the deep corruption of government laws are designed to protect the wealthy at the cost of the rest of us. We do not have a giant wealth divide by accident. It is not a happenstance that more than 90% of the wealth generated during the Obama administration went to the wealthiest. It is not lack of luck that led workers to be the big losers during the crash, losing their life savings which was often invested in their homes, their only real asset. These laws are passed because government serves the wealthy. Politicians in the United States must serve the big donors, not the people.

Another 1,244 of the Podesta Emails reference focus on nuclear energy and the relationship between the Clinton’s and the nuclear industry and uranium mining. The Clinton Foundation received $140 million in donations from investors and executives of “Uranium One” which has mines, mills and tracts of land in Wyoming, Utah and other U.S. states equal to about 20 percent of U.S. uranium production capacity. The corporation was sold to Russian interests and the coincidence of donations to the Clinton Foundation is raising questions because Secretary Clinton was one of the agency heads that had to approve the transaction because uranium is a strategic asset.

Most of the donations were given two years before the sale to Russia, although Chairman of Uranium One, Ian Telfer, donated between $1.3 million and $5.6 million to the Clinton Foundation during and after the review process for the Russian deal. The State Department staff member directly involved in making the decision was Jose Fernandez. He claims that Clinton had no influence on the decision, but the Podesta Emails raise new questions. The emails show Podesta and Fernandez communicated with each other shortly before and after he made this claim with Fernandez saying he wanted to do all he can to help Clinton’s campaign. All this adds up to an appearance of a conflict of interest. More information is needed to prove corruption. But, will it even be investigated?

The United States is ruled by the wealthy elite. This oligarchy holds on to power by using their money to decide who runs for office and to control the political party duopoly. They also control the media, which plays its role in ensuring that the big business duopoly remains in control by not discussing how the elections are manipulated by things like a fake commission, really a disguise hiding the duopoly, that only allows members of the duopoly to debate.

Researchers have shown how the government responds only to the demands of big business and the wealthy, which demonstrate we actually live in an oligarchy. The purposes of the managed elections are to deceive people, to make them feel like they have a role in governance.

Already we are seeing victories against the oligarchy which show that when people organize they have power. The people need to let the government know they will not be silent against systemic corruption. We will give #NoHoneymoon to Hillary and make sure hers is a presidency of protest; where the people will be relentless in demanding that the government represent our interests.