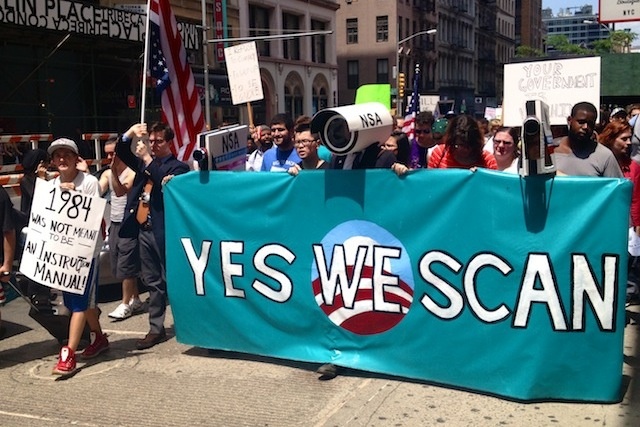 The conflict between democracy and state repression, often claimed as necessary to protect our safety and security, has moved the United States consistently toward a greater national security state that has become inconsistent with people’s privacy and freedom; as well as their ability to exercise First Amendment protected political activities. Where are we in this balance? How do we change it?

Marshall “Eddie” Conway, one of America’s longest serving political prisoners, was interviewed on The Real News Network where he is now a producer. Conway was a Leader of the Baltimore chapter of the Black Panther Party. He served 43 years and 11 months in prison after being tried unfairly. He was released on March 4, 2014 because the jurors in his case were not instructed that he had to be proved guilty “beyond a reasonable doubt” of an alleged murder of a police officer. His trial had many irregularities.

Conway discussed how the Black Panthers had been labeled the greatest threat to national security by the notorious FBI Director, J. Edgar Hoover. They were a threat, Conway explained, because they united people across races creating broad solidarity and through mutual aid programs, which showed how people working together for their common good through activities like breakfast and education programs could serve their own needs better than the capitalist system. The Panthers were demonized because of their self-defense activities against police violence in black neighborhoods and were targeted by the FBI’s counterintelligence programs which sabotaged them through the use of infiltrators, provocateurs, informants, and criminal charges, even though they were false.

These same kinds of tactics were used against Indigenous, Latino, Chicano, anti-war, environmental and anti-capitalist movements in the 60s and 70s. We continue to see them used today against Occupy, Black Lives Matter and others. As Jared Ball, who interviewed Conway, points out, many of the illegal tactics used by the FBI against Conway have been legalized today.

While the Black Panthers and other revolts of the 60’s and 70’s were fifty years ago, the history of repression against movements that challenge capitalism and the two party mirage ‘democracy’ that enables it, is much longer.

In “How the Two Major Parties Have Helped Destroy Democracy,” Frank Castro describes some of the events that occurred at the beginning of the twentieth Century. He points to the aftermath of the Bolshevik revolution in Russia that led to crackdowns against critics of capitalism in the US – crackdowns supported by both political parties. One example was the mass arrest of leaders of the International Workers of the World (IWW) in 1917 when the Justice Department raided 48 IWW meetings across the country, arresting 165 leaders of the union and prosecuting them for conspiracy to hinder the draft, encourage desertion and other charges. In a mass trial that lasted five months, all 101 who were tried were found guilty and sentenced to lengthy sentences and fined $2.5 million – destroying the union. This was one example of the destruction of radical and progressive opposition to corporatism and militarism of the United States.

He also describes how the Post World War II period, the Cold War, created a political consensus against Communism and “refined a coordinated relationship of narrowed domestic power between Democrats and Republicans, providing the groundwork to enact an increasingly clandestine police-state. Repression of previous magnitude would continue against not only anti-capitalists, but against movements for self-determination throughout the ’60s and ’70s . . .”

For more than a century we have seen the consensus of political leadership support the security state. We have seen it in recent years with both parties demonizing whistle blowers like Edward Snowden and Chelsea Manning as well are media outlets like Wikileaks and their executive editor, Julian Assange. This week, Reporters Without Borders and other organizations petitioned the President to release the latest CIA whistleblower, Jeffrey Sterling. Neither party has been willing to stand up to the National Security Agency’s dragnet telephone and Internet domestic and global surveillance systems.

This week it was evident in the controversy surrounding the FBI’s demand that Apple break the encryption on the San Bernardino shooter’s phone. Once again the two parties showed their support with both Hillary Clinton and Bernie Sanders refusing to oppose the FBI and Donald Trump calling for a boycott of Apple. This conflict between Apple and the FBI is the next step in the federal government’s campaign to end encryption of telephones, computers and Internet activities so they have access to all information.

As we have written before, infiltration is the norm, not the exception of political movements throughout US history. History shows how this growing security state is tied to the bi-partisans in government protecting big business interests and the unfair economy.

Today, the depth of surveillance – including infiltration of political movements, cameras to enforce traffic laws and monitor activities almost everywhere in populated areas, aerial surveillance of neighborhoods and protests by helicopters, drones and airplanes and digital spying, have created a pervasive surveillance apparatus that undermines privacy, political activity and communication. We cannot have a real democracy with this level of surveillance.

The Normalization of Police Violence

Police violence has been part of the United States’ security state for all of its history. In recent years with the advent of cell phones more people have become aware of it as they have seen police in the act of killing unarmed civilians, usually African Americans, Latinos or the poor. In addition, while moments of militarization of police have occurred in US history, now there are heavily militarized police forces throughout the nation and SWAT teams being used against protesters and even to patrol neighborhoods.

There have been so many violent acts by police that have resulted in death that it seems to be a regular occurrence. One of the horrible cases was the death of 12-year-old Tamir Rice in Cleveland, where the police started shooting as soon as they got out of the car. There were no charges brought against the officer, but now to make matters even worse, the City of Cleveland is suing the Rice family for the cost of the ambulance. Police murder is so acceptable that not only is the officer not charged, but the family pays the cost.

In Chicago police officer Robert Rialmo claims he was so traumatized after he killed 19-year-old Quintonio LeGrier and his neighbor Bettie Jones last December that he is suing the victim’s estate for $10 million. In this case LeGrier’s family sued Rialmo for wrongful death and the officer countersued. Will this become the new normal – police kill someone then sue their victim’s estate?

This week, heavily armed US Marshalls were used to enforce collection of student loans. A private loan collection service gets a judgment against a student and then a gang of Marshalls go to the person’s home in the early morning and arrest him. The person is taken to court and cannot leave without agreeing to a payment plan. Where else will we see US Marshall’s being used to enforce debts?

Those who expose police violence often face repercussions like ongoing police harassment and arrests. In the choking death of Eric Garner, Ramsey Orta, who happened to video the death, has faced consistent harassment and five arrests:

Orta recognizes the police intimidation he has faced in Manhattan and Staten Island since 2014 as retaliation for filming the video. After Garner’s death, Orta started to experience police surveillance: flashlights shining through his window, cop cars following him in his neighborhood at all times of day and night, and family members being searched after leaving his house. This intimidation escalated into more blatant acts of harassment when his child’s mother was continuously questioned at her job, his house was raided, and Orta himself had several run-ins, a few he filmed, during which cops questioned him, claiming they believed he had a gun or that he fit the description of a suspect.

Orta is part of Copwatch and continues to video police. He realizes the system will not indict police, as they failed to indict in the Garner killing, but he thinks it is important to video in order to ensure people understand police violence.

And, it is too common for law enforcement to hide information about deaths from the victim’s families. The family of Sandra Bland, who died in a Texas jail cell where she was held in solitary after an unnecessary traffic stop, is trying to find out the details of her death. The police are claiming she hung herself with a plastic bag. Paul Spector, who describes himself as a prison nurse, commented on the article and said that plastic bags are never allowed in cells because they can be used as weapons or for suicide. He also describes how they can be used by police to kill an inmate:

Most significantly, plastic bags are used by guards to make murder look like suicide. The victim is put in a choke hold till they pass out in 3-5 seconds (a “blood choke” not an airway choke that would leave marks). The bag is tied into a noose, placed on the unconscious victim’s neck. The free end is tied to something high enough to maintain pressure, even 4 ft is usually enough. No need to lift the body up, this technique requires no strength. No signs of a struggle, totally silent, latex gloves leaving no prints. The kill is easy, certain and looks exactly like suicide.

Sandra Bland’s family does not think she killed herself. The police are stonewalling and not providing all the details. Will we ever find out the truth?

The police continually seek to expand their power. This week, in New York, the police commissioner is urging the legislature to make resisting arrest into a felony. Resisting arrest is a very vague offense. Police often threaten resisting against protesters even when there is no resistance. To make this into a felony would be an awesome grant of abusive power to an already abusive NYPD.

Transforming Government and the Economy Includes Dismantling the Security State

We have known since the founding of the United States, thanks to Benjamin Franklin, that “Those who would give up essential liberty, to purchase a little temporary safety, deserve neither liberty nor safety.”

The destruction of our privacy is one more systemic challenge that has been forced on us by the bi-partisans who control the Congress, presidents from both parties and a court system that has undermined constitutional rights. It is instituted and grown by a security state bureaucracy that works hand in glove with big business information gathering to provide total information awareness to those who seek the power to control others.

Part of our task as change agents is to fight the destruction of our privacy as we seek to transform the nation from a plutocracy to a democracy, from an unfair and unequal economy to one that meets the necessities of all the people and to a country where people have greater control over their everyday lives and a greater say in their destinies.

To accomplish this, we must continue to expose and push back against the security state whenever possible and to stand in solidarity with those who are targeted by the system.

We will create transformation by linking our struggles and being persistent in our efforts. The state is fighting back. We must be aware of its tools and not allow it to divide or deter us.