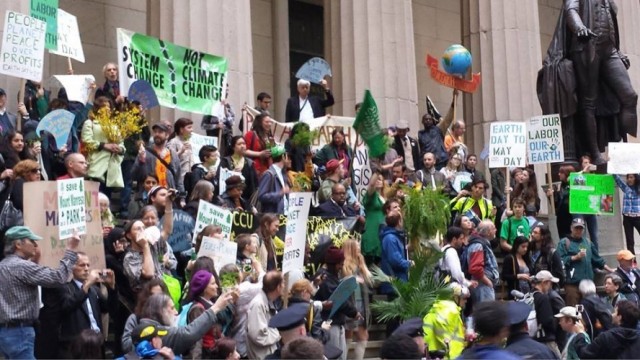 This week, on Earth Day, representatives from 130 countries gathered at the United Nations in New York City to sign the climate treaty agreed upon in Paris last December. As they smiled for the camera and promised to do their best to hold the temperature down, climate activists posted an open letter stating that it is too late, the climate emergency is already here. The climate treaty further exacerbates the crisis by allowing fossil fuel emissions to escalate until 2030 and making commitments to address the crisis voluntary instead of mandatory.

The Paris Climate Treaty was a prime example of the political theater that has become the norm for government heads. As the planet heats up and the oceans rise, world leaders pretend they are doing something effective about it. In reality, they are promoting false solutions that enrich the economic elites.

To end the political charade, people who see through our mirage democracy are taking action and building alternatives. The political revolution has begun, locally and globally, and will continue long past the upcoming election season.

Leading up to the signing of the Paris Treaty this week were actions to stop the advance of fossil fuels and nuclear energy. We covered a portion of them.

Students at two universities, Columbia in New York City and the University of Massachusetts in Amherst, are sitting in to pressure their schools to divest from fossil fuels. At U Mass, students continued their sit in after university officials verbalized support for divestment. Students are not satisfied with words, they are asking the university to take meaningful action.

Divest Harvard stepped up the pressure this week. Sadly, the Harvard administration remains entrenched in its fossil fuel investments while Yale University announced its intention to divest fossil fuel endowments on Tuesday. Harvard officials cite their research on climate change as their contribution to solving the climate crisis.

The nuclear industry is attacking environmentalists, using the Washington Post and the New York Times as their mouthpiece, as being ‘anti-science’ when it comes to nuclear power. They claim that nuclear power is necessary to reduce carbon emissions. In reality, nuclear is more expensive, slower to be put in place and dirtier than wind and solar. The Nuclear Information and Resource Service recently launched a #NuclearisDirty campaign to counter the pro-nuclear propaganda. Every dollar spent on nuclear is a dollar that could have been used to cut energy use by increasing efficiency and putting in place energy from the sun, wind and water.

Research shows that we can actually move to clean renewable sources of energy within a decade (less than the time it takes to build a nuclear plant), if we make the effort. The city of San Francisco passed legislation this week requiring all new buildings to incorporate solar panels. The Department of Energy just reported that the US could meet almost 40% of its energy needs through rooftop solar alone.

We are excited to announce that a community in our home town of Baltimore, recently stopped a dirty trash incinerator (being billed as a clean energy plant despite producing toxic pollution) from being built. It would have been constructed in a low income community, but Destiny Watford, a high school student, organizing with other high school students organized Free Your Voice which led the effort to stop it. She was awarded the Goldman Environmental Prize for her work this week. Now the community is pushing for a solar farm to provide clean energy and high-quality jobs.

One Year After the Uprising

Although the commercial media has turned its attention to the election and the hashtags have become less prominent, police murder of unarmed blacks continues at a similar pace this year. This has not been forgotten in Baltimore. After the murder of a young man named Freddie Gray, by Baltimore City Police officers last year, the city erupted in protest. As long-time residents, this did not surprise us. Activism had been bubbling up for a number of years in response to racism, police violence and economic injustice; it has accelerated since the uprising.

Many events to mark the one year anniversary are taking place this week and the next in Baltimore to remember the uprising. Last weekend, there was a rally and march in Gray’s neighborhood. Family members of those slain by police spoke out, and it was clear that there are still open wounds between the community and the police.

Some positive changes came out of the uprising. In this interview, young Makayla Gilliam-Price speaks about her organizing and growth over the past year. On Clearing the FOG, we interviewed four Baltimoreans who are working for justice in the city. They all note that underneath the violence and oppression is an economy that creates great inequality within the city. As Boots Riley says, “The only thing that will stop murders in black neighborhoods, or in any neighborhoods, is a higher standard of living, not laws that will be enforced through a racist lens.”

Perhaps one of the most interesting changes in Baltimore is what is happening with the city elections. The mayor and six city council members are not running for re-election. In their wake, large numbers of candidates are vying for their seats. The Baltimore Green Party is experiencing a resurgence as voters grow tired of almost 50 straight years of corrupt Democratic Party leadership. Joshua Harris, one of three Green Party candidates for mayor, is putting forth a bold transformational agenda to empower communities and create a more equitable distribution of capital in the city. This includes shifting capital to neglected communities, a Baltimore City Public Bank, participatory budgeting, land trusts so communities can control development, community involvement in policing. It is a cutting edge urban agenda for the 21st Century.

Nonviolent Resistance is Affecting the Elections

Erica Chenoweth, the author of “How Civil Resistance Works”, writes that elections both locally and globally are being shaped by nonviolent resistance. Movements in the US, from Occupy Wall Street to Black Lives Matter to the Fight for 15, are putting issues on the political agenda, such as wealth inequality, corruption, racism and poverty, that haven’t been there for decades. This is a year for outsiders as Sanders and Trump make greater gains within their respective parties than previous insurgent candidates.

Sanders and Trump are also exposing the rigged nature of the presidential primary process, which has existed for decades. A Harvard study found that the United States ranked the worst of all western countries in fairness of its election process. Add to this that the US also continues to rank poorly in the World Press Freedom Index, and you will understand why we often call the US a ‘mirage democracy’.

Many of the nonvoters in the US recognize this charade of politics. They don’t vote because it doesn’t seem to matter – the choices are one corporate candidate or another. In a recent interview, Noam Chomsky points out that the demographics of nonvoters in the US match those of people who vote for labor or social democratic parties in the European Union. The US does not have a national labor or socialist party. The closest we come to a class-based party at the national level is the Green Party.

Chris Hedges participated in the Democracy Spring actions last week in Washington, DC. He wrote about the importance of participating in actions of resistance wherever we are. Arun Gupta also attended the Democracy Spring. His observations are similar to ours, that the event was scripted with controlled messaging from non-profit organizations, unlike the more organic protests during the Occupy Movement. Bill Moyer (not the journalist, Bill Moyers), who wrote “Doing Democracy”, warns us that during this phase of building the movement and national consensus we need to maintain a position of radical dissent and avoid becoming a ‘professional opposition organization’ (or a ‘poo’ as we call it).

On the other side of the Atlantic, the Nuit Debout movement is organic and growing. Much like Occupy, people are protesting wealth inequality, the corrupt economy and failed political parties. Every night there are general assemblies and thousands participate. People are practicing and discussing how to create real democracy. Instead of allowing a political party to define their platform, they are using consensus to develop a list of “ideas for moving forward.”

In the US, no matter who is elected president in the November election, it will be critical for those who have been activated to continue to organize and visibly protest. To achieve the rapid actions needed to address the climate crisis and the systemic changes required to end racist systems and create the new economy, the movement will need to set the agenda.

Popular Resistance has been holding a discussion with Revolt Against Plutocracy (RAP) for some time now about how to build on the popular momentum that exists right now so that it continues after the election. The ‘political revolution’ that many are calling for must not die with the Stein and Sanders campaigns. We are focused on movement building, and so we have joined forces with RAP to reach Sanders supporters and encourage them to keep fighting. The “political revolution” must continue after the election.

One issue which unites us and which will come up quickly after the election is the Trans-Pacific Partnership (TPP). The White House is pushing for it to be ratified during the lame duck session of Congress, which takes place after the election and before the new Congress is seated. This is typically a time when unpopular legislation is passed. It is the most anti-democratic period for Congress because legislators are not accountable to voters.

We are organizing now to mobilize thousands of people to take action during the lame duck session to make it impossible for them to consider the TPP. We need your help. Click here to join the #NoLameDuck Uprising. Spread the word on social media by joining the Flush the TPP Facebook page and following us on Twitter so that you can share posts and tweets. Use the materials on FlushtheTPP.org to spread the word about the #NoLameDuck Uprising to let people know about it and to sign them up. And click here for information about how to join the national organizing calls.

Stopping the TPP will be a huge victory of people power against transnational corporate power. We can do it if we work together. There are tasks for most everyone. And after we stop the TPP, we will continue to flex our people power muscles to bring the transformation that we all need and desire.