Republican efforts to repeal the Affordable Care Act (ACA) were stalled again this week, due in large part to public pressure including courageous and persistent civil resistance in Congress. This was another battle won to prevent millions more from losing health insurance and tax cuts for the rich, but the fight for a universal healthcare system is far from over. In fact, we have barely begun. 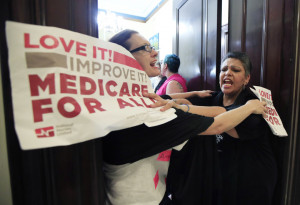 Dr. Carol Paris writes, “Today, we breathe a quick sigh of relief. But we cannot celebrate a return to the status quo, a system that rations health care based on income and allows 18,000 Americans to die each year unnecessarily.” Dr. Paris argues that rather than focusing on the ACA, we must now advance National Improved Medicare for All (NIMA) – a publicly-funded and comprehensive universal healthcare system in the United States.

Imagine the impacts National Improved Medicare for All will have when it is achieved – it will create social solidarity so that we all work to protect and improve it; it will put the needs of people over corporate profits; it will realize the fact that all people deserve the same standard of health care; and it will empower people to fight for other basic necessities. And, as Eleanor Goldfield explains in this week’s Act Out!, “The bottom line is that when your bottom line is health, not wealth for big pharma and insurance companies, you not only save people, you … save money.” 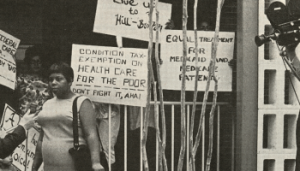 Today is the 52nd anniversary of the passage of Medicare. It was initially intended to be a model that could be expanded to cover everyone, but racist Dixiecrat Rep. Wilbur Mills, the chair of the powerful Ways and Means committee, added a poison pill to the legislation. Rather than a single system, Medicare, to cover seniors and those in poverty, Mills made it a “three layer cake” of Medicare Parts A (for hospital patients) and B (for outpatient healthcare) and Medicaid (for low income). By breaking it up and administering part of it federally and part of it at the state level, it failed to be a unified system that could easily expand.

Still, Medicare insured 19 million seniors in its first year (almost twice as many as the ACA insured when it began four years after passage and Medicare did so without computers). As described in “The Power to Heal: Civil Rights, Medicare, and the Struggle to Transform America’s Health Care System“, Medicare was used to desegregate 6,000 hospitals within six months, due to the vigilance of civil rights activists who staffed the hospitals. Medicare reduced poverty among seniors by 75%.

Events are being held across the country this week to celebrate Medicare’s birthday and call for National Improved Medicare for All. Some people are holding rallies and marches, some are dying-in to represent the tens of thousands of people who die each year from lack of access to care, some are showing movies and others are protesting at their Member of Congress’ offices.

There is a growing movement of movements calling for NIMA, and there is legislation in the House of Representatives, HR 676: The Expanded and Improved Medicare for All Act, that would create NIMA. Even though the majority of Democrats in the House are co-sponsors of HR 676 (116 co-sponsors), there is a lot of work to do. Democrats, including single payer supporting Sen. Bernie Sanders, are saying that their first priority is to “fix the ACA.” The truth is you cannot fix a law built on the faulty foundation of the insurance industry. They pay lip service to NIMA by saying that it is a goal to achieve down the road, but we cannot allow them to delay that goal any longer. We are spending enough on health care in the US to provide high quality comprehensive coverage to every person. Why delay it?

The answer is that there is a lot of money being made on health care in the US. Axios analyzed the healthcare industry and found that the ACA has been a huge cash cow for health insurers, pharmaceutical companies and private hospitals: “Stock prices have boomed, and CEOs took home nearly 11 percent more money on average every year since 2010.” Billions of dollars going into CEO’s and investor’s pockets are coming from our tax dollars and could be spent on health care instead. But these industries fund Congressional campaigns, so we cannot expect Congress to act against their interests until we build the demand and make ourselves impossible to ignore. 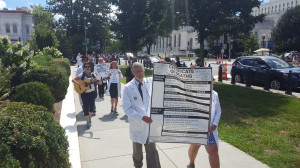 People have the power to overcome industry influence through strategic and sustained resistance. These past few weeks, NIMA supporters, including Dr. Carol Paris and ourselves, took action in solidarity with groups fighting to protect Medicaid from cuts. Now we need to turn that same focus and energy to passing HR 676 in the House and Senate. Join the Health Over Profit for Everyone campaign to get involved.

The Bigger Impact of Putting People Over Profit

The for-profit healthcare system in the US, which is unique in the world because every other industrialized nation treats health care as a public good, is a manifestation of the bigger picture of an economic system that drives wealth inequality. A new initiative, the Commitment to Reducing Inequality Index, outlines three actions that governments must take to address the growing wealth divide:

1. “Significant social spending on education, health, and other public services.”

2. Taxing the rich and their corporations to fund these services.

3. “Ensuring that working people have enough bargaining power, in both the workplace and the political process, to demand and win decent wages and economic security.”

The US is going in the opposite direction in all three of these areas. Public services are being underfunded and sold off to profiteers. Congress is pushing for greater tax cuts on the rich, even they solve no problems and are counterproductive. And unions and wages are under attack. This is why poverty and wealth inequality continue to explode. 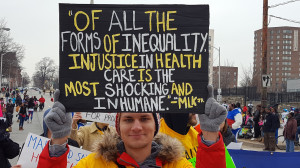 A National Improved Medicare for All health system has the health of everyone as its bottom line, not the wealth of a few. It would drive public policy to prioritize public health on a broad range of issues. Ralph Nader raises two current health crises, opioid addiction and the nation’s lack of preparedness for an infectious disease epidemic.

Over 1,000 people, many of them young, die every week in the US from opioid overdose. Profit drives companies like McKesson, which is being sued, to flood the market with painkillers. In a five year period, McKesson delivered 423 million opioid doses to West Virginia, which has a population of 1.8 million and the highest rate of overdose deaths. A national health system would be the single purchaser of pharmaceuticals, giving it the power to more closely monitor distribution.

Currently, it is profit that determines where health facilities are built. Hospitals and clinics, with the exception of Federally Qualified Health Centers, are being closed in rural and low income areas where they do not bring in enough profit. Under a national health system, health facilities would be given global operating budgets so they could focus on caring for their community members rather than how to keep the doors open. 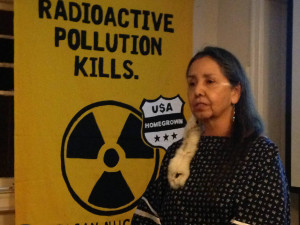 Access to clean water is reaching crisis levels globally and becoming a bigger problem in the US. A report this week found pollutants in almost all US tap water.  The Trump administration is moving to gut the Clean Water Act, which would remove protections from contamination. Sadly, it is Big Agriculture that is challenging the Clean Water Act because it restricts their ability to contaminate water ways. When the federal government foots the healthcare bill, paying for illnesses caused by polluted water doesn’t add up.

We are excited to announce that Water Protector Charmaine White Face, a leader of the campaign to clean up the more than 15,000 abandoned Uranium mines that pollute air, land and water in the US, was recently recognized as a Giraffe Hero for sticking her neck out for public health. At 70, Charmaine remains a consistent and strong force in ending the decades of contamination of water, much of it on tribal land, that is causing high rates of cancer, birth defects and disease. To learn more and get involved, visit CleanUpTheMines.org. 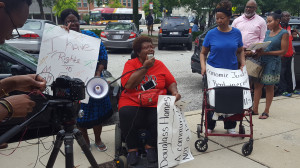 And finally, another issue that has come into the spotlight is the lack of affordable housing. Advocates held days of actions this week to highlight that only one in four people who qualify for federal housing assistance are able to receive it due to inadequate funding. We spoke with folks from Our Homes Our Voices this week on Clearing the FOG Radio. Public housing is being demolished and privatized in Baltimore, leaving residents with no place to go. We picketed with Rev. Annie Chambers of Douglass Homes where the residents have been denied elected representation and are being hit with new rules that make the quality of life unbearable in an effort to force them out.

Health as a Path to Transformational Change

Health is connected and fundamental to all of our current struggles.  It is our responsibility to push for a solution to the long term healthcare crisis in the United States. It is time to demand that we reject systems that commodify and profit from our disease, and fight for a healthcare system that guarantees all people living in the US have access to high quality health care when they need it. 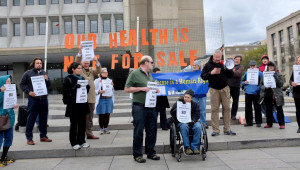 We can build on the current moment to keep the healthcare crisis in the national dialogue. The defeat of the Republican health plan has created a space for us to fill with the solution: National Improved Medicare for All. We are taking on multi-billion dollar industries in this fight. We cannot be complacent and expect our plutocratic government to act in our interests.

A spark has been lit in the current healthcare fight. We recognize that we have power. Now, let’s build that power from this day forward until we win.