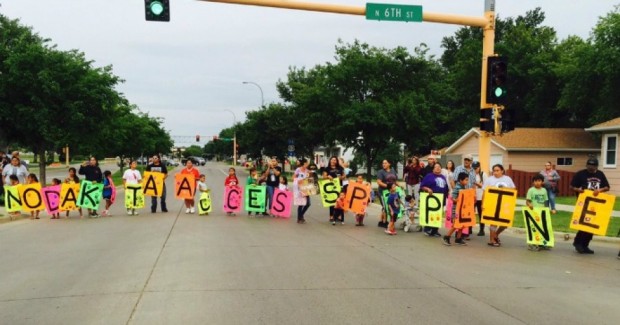 Newsletter: For Justice, Unity & Inspiring Each Other

Above: Protest in Bismark, ND against Dakota Access Pipeline.

The latest chapter in the US war against Indigenous Peoples of this land is being fought by more than 90 tribes in North Dakota against a pipeline that threatens water, air and land, including sacred sites. Indigenous Peoples understand that the environment is to be respected and that to destroy it for corporate profit goes against nature and against ourselves.

Indigenous Peoples have lived in what is now called North America for more than 10,000 years. They were the first human inhabitants. In comparison, the United States is not even 250 years old.

Ever since colonizers from Europe came to these lands 600 years ago, Indigenous Peoples have paid a heavy price. Colonizers took land where tens of millions, some estimate as many as 100 million, of people lived. This was done using incredible violence, genocide and deceit. Treaties that promised the Indigenous their land were signed, but were then violated and the land was taken anyway. And even worse, Indigenous body parts were made into products and sold and those that slaughtered Indigenous people were treated as heroes, some were even made president.

In recent years, as thousands of miles of pipelines for oil and gas were laid down – at a time when the science of climate change is telling us to stop building all carbon infrastructure – it has often been Indigenous Peoples who have provided a moral compass and leadership in the fight to stop polluting infrastructure. This is happening right now in the conflict over the Dakota Access Pipeline.

The Great Sioux Nation has brought thousands of people from scores of tribes together to challenge the destruction of the environment and the violation of treaties by the Dakota Access Pipeline. They refuse to back down to oil developers that threaten their only source of water and much more. The tribes developed a campsite – a human shield of prayer — to protest the pipeline, which overlooks the area where the Missouri and Cannonball rivers merge. The site is just South of where the oil pipeline would cross the Missouri River. Here is how Standing Rock Sioux Tribal Chairman David Archambault II describes the scene:

“It is a spectacular sight: thousands of Indians camped on the banks of the Cannonball River, on the edge of the Standing Rock Sioux Reservation in North Dakota. Our elders of the Seven Council Fires, as the Oceti Sakowin, or Great Sioux Nation, is known, sit in deliberation and prayer, awaiting a federal court decision on whether construction of a $3.7 billion oil pipeline from the Bakken region to Southern Illinois will be halted.”

This conflict about is over a nearly 1,200 mile long pipeline being put in across treaty lands, burial grounds and the Missouri River. The pipeline, owned by Energy Transfer Partners, a Texas corporation, has been approved by the State of North Dakota and the US Army Corps of Engineers. One key contention is the risk the pipeline poses to the Missouri River, which Archambault reports “provides drinking water for millions of Americans and irrigation water for thousands of acres of farming and ranching lands.” The tribe has been opposing the Dakota Access Pipeline since they first learned about it in 2014.

Federal law and treaty rights require consultation with the tribe before construction, but the Corps of Engineers allowed for no meaningful consultation. In their first draft of the assessment of the project, the Corps did not even mention that the tribe, whose rights they were infringing upon, even existed. In fact, the Corps used a fast track process by breaking this large project into a series of smaller projects in order to avoid the environmental reviews required by the Clean Water Act and the National Environmental Policy Act.

The breaking up of projects and ignoring the full impact of carbon infrastructure is a very common tactic. It is used in almost every carbon project approved by the notorious Federal Energy Regulatory Commission (FERC), whose corruption is routinely on display. These projects, and how they relate to other carbon energy projects, should be viewed in their totality because their impacts are connected. The Dakota Access Pipeline was permitted in four states with minimal reviews and the only portion with any environmental review was on federal lands – and it was looked at in isolation so that a false picture of its environmental impact could be created. Unfortunately, the law protects greed because property rights come before human rights and the rights of Mother Earth under US law.

And, property rights are protected by the force of law – as we have seen throughout history. What has been the reaction in North Dakota? Archambault writes: “In recent weeks, the state has militarized my reservation, with road blocks and license-plate checks, low-flying aircraft and racial profiling of Indians. The local sheriff and the pipeline company have both called our protest ‘unlawful,’ and Gov. Dalrymple has declared a state of emergency.”

In fact, North Dakota’s homeland security director ordered the removal of state-owned trailers and water tanks from the Dakota Access Pipeline protest campsite this week, citing mounting reports of ‘unlawful activity’. With 500 to 4,000 people coming to the camp, North Dakota homeland security panicked and sought to discourage protest against the pipeline.

The campsite is located on federal lands so the governor has asked the federal government for help. Tribes report that more caravans of people are en route to join the protest. The camp has no permit, but is reportedly seeking one from the federal government. Authorities have arrested 29 protesters – including the tribal chairman – in the last two weeks for alleged disorderly conduct or trespassing. (Consider the irony of being charged with trespassing on lands that were stolen from them by the colonizers.)

The govern is claiming that “hundreds of criminal acts” are occurring, including vandalism, trespassing on private property and blocking the highway.” There have also been claims that lasers have been pointed at low-flying plans that are observing the camp. Some Indigenous say the planes were being used to disrupt cell-phone communications, something denied by the police. The protesters are being nonviolent.

It is not only the 90 tribes who are protesting, but ranchers, farmers and residents of small towns who depend on the Missouri river are also showing overwhelming support for the protest. Both Indigenous and non-Indigenous people want a safe and healthy environment for themselves and for their grandchildren.  The tribes are showing that the way forward requires action. Archambault explains:

“We are also a resilient people who have survived unspeakable hardships in the past, so we know what is at stake now. As our songs and prayers echo across the prairie, we need the public to see that in standing up for our rights, we do so on behalf of the millions of Americans who will be affected by this pipeline.

“As one of our greatest leaders, Chief Sitting Bull of the Hunkpapa Lakota, once said: ‘Let us put our minds together and see what life we can make for our children.’ That appeal is as relevant today as it was more than a century ago.”

More actions are planned at the camp and other areas of the country. Follow the resistance under the hashtags #RezpectOurWater, #NoDAPL, and #DakotaAccessPipeline

According to the Associated Press, pipeline developers agreed to pause construction on the Dakota Access Pipeline until a federal court hearing this week in Washington, DC, Standing Rock Sioux Tribe v. U.S. Army Corps of Engineers. The lawsuit claims that the pipeline violates the Clean Air Act and other federal laws, as well as the tribal rights of the Sioux.

Judge James E. Boasberg did not make a ruling but promised to do so by September 9. At the same time, Energy Transfers has filed suit to have the protesters removed and that hearing is currently scheduled for September 8.  Judge Boasberg is a member of the Foreign Intelligence Surveillance Court and is known for ruling that the public did not have the right to see photographs of the dead body of Osama bin Laden.

Anne Meador of DC Media Group reports that hundreds of people were outside of the US federal court in Washington, DC to protest the pipeline at the hearing. They were outside for hours and many went inside, filling both the courtroom and the overflow room, while scores remained outside.

Meador reports that many Sioux traveled the long distance to Washington, DC to attend the hearing. For Macauley Brown, 24, a member of the Standing Rock Sioux from Wakpala, South Dakota, this was his second trip to Washington in two weeks. The first time he arrived on foot after running 2,000 miles with other youths to deliver petition signatures to the Corps. Following the hearing, he returned to the Spirit Camp. “It’s peaceful, prayerful. We are staying together,” he said.

The Standing Rock Sioux Tribal Chairman, in a press release, said: “I believe that everyone who attended the hearing today will understand that the Tribe is seeking fundamental justice here—as we seek to protect our waters and our sacred sites.” He added that the lawsuit already established that the federal government must involve tribes in their decision making and that the unity created among the tribes will continue to strengthen. He urged nonviolent and peaceful actions to protest the pipeline, encouraging the tribes to “stay unified in peace and in prayer. That is the way we will provide a better life for generations to come.”

Learning From Each Other

We highlight this protest against the Dakota Access Pipeline so all can be inspired by their nonviolent resistance. Learning from each other and gaining energy from each other’s actions is how movements grow and remain persistent against the challenges before us.

This week, we published an article from the Feminist Wire, Winning Our Movements Inside And Out. The article describes how traumatic experiences can lead people to take action. Their focus was on sexual violence against women, but the same concept applies to any who have been traumatized. For Indigenous Peoples, the trauma of experiencing genocide for six hundred years, and continuing to suffer today, can be healed in part by taking action to stop the oppression and destruction.

Similar destruction and injustice are happening in many places. In the flood-ravaged Gulf, oil and gas pollution is causing drastic climate impacts. In the Arctic, ancient diseases are reanimating and highways are melting because of climate change. Mountains are collapsing in Alaska and drought and massive forest fires are occurring all over the world.

These are a few examples of many. The earth is reacting to the carbon-based energy relied on by humans. People, like the Sioux, are calling out warnings and putting their bodies on the line to stop more carbon infrastructure. Is the corrupt nature of governance, where corporate interests take precedence over people and planet, capable of hearing the earth and its people? Is it capable of changing course before the disasters worsen?

The strength of Indigenous Peoples inspires all of us to stand up against injustice – not only injustice against us personally, but injustice against others and the planet. The growing popular movement is for economic, racial and environmental justice as well as peace. The unity of tribes, coming together to stop the Dakota Access Pipeline, is a display of the unity necessary throughout the movement.