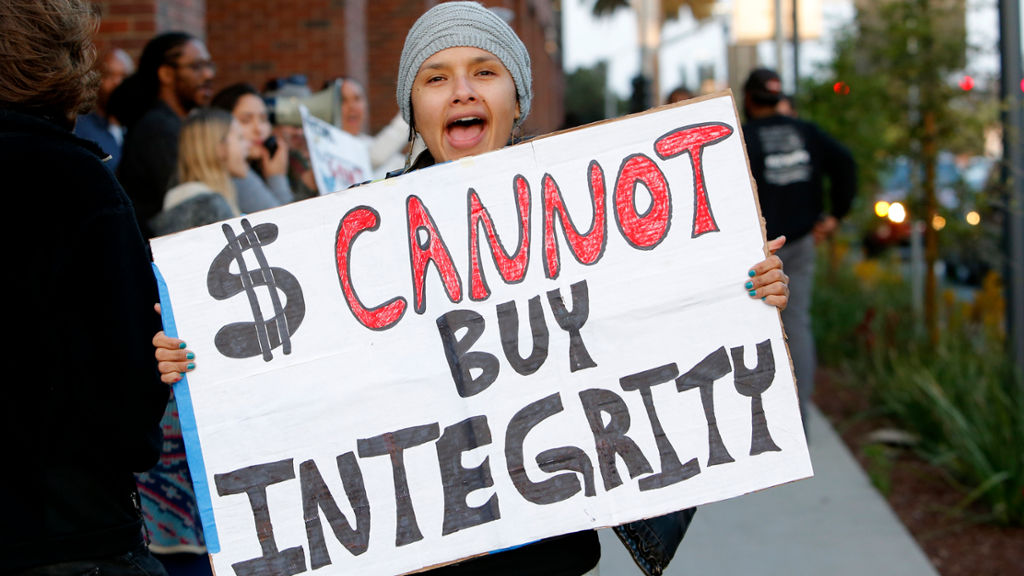 Newsletter – Free Yourself From An Exploitative Culture

Shoppers hit the malls and online stores this week, spending over $3.5 billion online alone on what is called ‘Black Friday’. Some people reject the extreme consumerism, calling it ‘Buy Nothing Day’ and staying home in protest, others take their protests to the streets. Anti-police violence activists in St. Louis, Missouri, demonstrated peacefully at a major shopping mall to say “No Justice, No Profit.” True to form, police responded by violently attacking the 100 or so protesters and arresting seven people.

Mazaska Talks, an indigenous-led movement, promoted ‘Divest Black Friday,’ and encouraged people to protest the banks that are funding pipelines. They asked people to place notices on ATM machines to let customers know that their money is financing destruction of the planet. In our home town of Baltimore, groups hosted ‘Buy Black’ for Black Friday through small markets featuring local black-owned businesses.

Our friends at The Rules remind us that there are many fulfilling things money can’t buy, such as community and wisdom. They write that ‘Buy Nothing Day’ is “an opportunity… to nurture the feeling of sovereignty you get when you step back from mainstream culture and know that it has no hold on you.”

Another way to free yourself from a culture that exploits people and the planet is to change the way that you celebrate Thanksgiving by looking at the truth behind the holiday and what it really represents, the slaughter of Indigenous People’s for their lands and resources, the American Genocide. This is why the Indigenous call it the ‘Day of Mourning’. The impacts of that genocide are ongoing. Glen Ford of Black Agenda report explains that “Nobody but the United States celebrates Thanksgiving. It is reserved by history and the intent of ‘the founders’ as the supremely white US holiday.”

Cliff DuRand of the Center for Global Justice writes, “Much of the bounty celebrated on Thanksgiving Day is the fruit of the land we stole from the natives, created by the labor of slaves, their descendants and the waves of immigrants that continue to this day.” He adds that once this is understood, we can also recognize that the Thanksgiving Myth represents what we want to value as a people, personal relationships and peace. With that in mind, Emma Fiala lists ways that we can celebrate the holiday constructively, such as supporting Indigenous-led organizations, discussing the truth about the holiday and choosing as a family whether to continue to celebrate it or not. 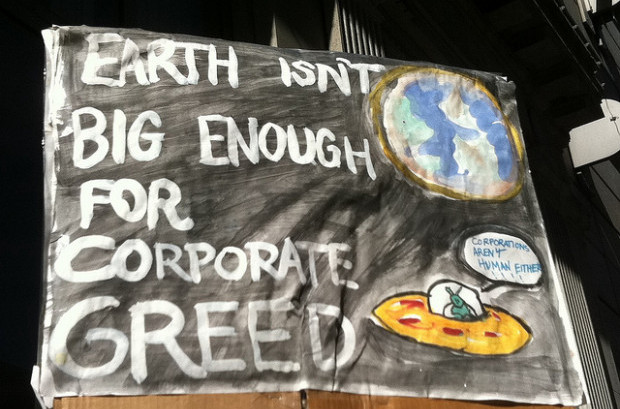 Amazon and the run-away wealth divide

While we’re talking about truth, let’s look at ways our exploitation-based culture is hurting all of us. One example is the concentration of wealth in the United States, which is accelerating at an alarming pace. In 2010, 400 people owned wealth equivalent to the bottom 50%, over 150 million people. We thought that was outrageous, but by 2015, the number was down to 20 individuals.

A new report by Chuck Collins and Josh Hoxie of the Institute for Policy Studies finds that now just three people in the United States, Jeff Bezos of Amazon, Bill Gates and Warren Buffett, own wealth equal to the bottom 50%. That percentage may have changed yesterday because online sales raised Amazon’s stock values so much that Bezos is now a hundred billionaire ($100,000,000,000).

Amazon has become a giant predator in the US economy with a strong grip on Washington politics. Bezos bought the Washington Post, and then signed a $600 million contract with the CIA to build a ‘private cloud’ for the spy agency, raising concerns about conflicts of interest over the Post’s reporting on the CIA and federal government. This month, because of Bezos’ heavy lobbying efforts, Congress took steps that could lead to a $53 billion contract for Amazon to provide goods to the Pentagon.

Amazon is so powerful that cities across the US and Canada are tripping over themselves to lure Amazon with huge tax breaks and land give-aways. James Wilt explains how this is a “textbook ‘race to the bottom’ situation, in which governments are expected to commit massive public funds to subsidize a for-profit corporation so it doesn’t lose the ‘opportunity’ to another jurisdiction.”

Simon Head describes Amazon’s business model as one that puts increasing pressure on workers for greater output and fires them if they fail to perform. Workers have gone on strike to protest “unpaid wages and overtime, dangerous conditions, a lack of breaks and water during hot summer months, and retaliation by management against their organizing efforts.” Amazon also exploits workers who deliver its products. Instead of using the US Post Office for the ‘last mile’ of delivery, Amazon now employs “a network of supposedly self-employed, utterly expendable couriers enrolled in an app-based program which some believe may violate labor laws.”

In this disposable worker economy, it is no surprise that poverty is growing. Collins and Hoxie’s wealth inequality report described the ‘underwater nation’: one in five households either have zero or negative wealth (they are in debt). Hoxie also published the report, “The Road to Zero Wealth” this September, which delves deeper into the significant racial wealth divide. If nothing is done to change the current trends, black households are on track to reach zero wealth by 2043. (Listen to our interview with Collins and Hoxie on Clearing the FOG Radio)

This trend is happening world wide. Another report found that globally, billionaires increased their wealth by almost 20% last year. This level of wealth disparity has not existed since the Gilded Age. John Atcheson writes that this is a natural result of capitalism with its drive for ever greater profits. 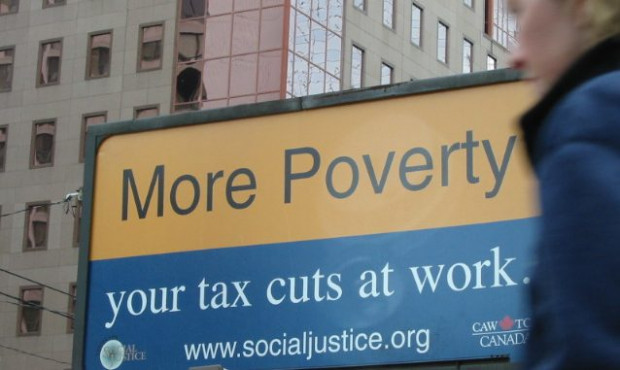 Will we have prosperity or more austerity?

Contrary to what is normally taught, growth is not necessary for prosperity and well-being. Costa Rica demonstrates that prosperity can exist with a low per capita income through investments in social necessities such as education and health care.

If a relatively poor country, such as Costa Rica, can do it, the United States can certainly create prosperity for everyone. It requires significant changes that are not being considered by Washington at present, such as what happened after the Gilded age when the government raised taxes on the wealthy and passed laws against monopolies. In fact, the new tax proposal in Congress is taking us in the opposite direction and will increase concentration of wealth.

Before the November break, Congress passed the new tax plan in the House of Representatives and then passed it out of committee in the Senate. Next, it will head to the Senate Floor for a vote. This plan will cut taxes for the wealthiest and increase taxes for the rest of us. While the tax plan is being pushed primarily by Republicans, the Democrats are largely silent on it, perhaps because they don’t want to upset the donor class, which funds their elections. The Democrats were much louder during efforts to repeal the Affordable Care Act. Of course, that law provides massive subsidies to the insurance industry and forces people to buy their products, so the industry wants it to stay in place.

Here are a few of the egregious aspects of the tax plan:

– It will undermine Social Security and Medicare funds, leading to cuts in those programs.

– It will require graduate students, who are already underpaid, to pay taxes on the tuition breaks they receive.

– It will not ‘trickle down’ to workers in the form of better wages.

– The repeal of the Estate Tax and not taxing investment earnings will lead to oligarch offspring becoming a permanent aristocracy.

Overall, the tax plan will also increase the federal deficit and lead to cuts in important programs. Jill Richardson describes what those tax dollars could do instead for health, education and more, broken down state-by-state. The United Kingdom teaches us what years of austerity programs do: a new study reveals that there has been an increase in deaths by 120,000.

None of this is necessary. Jason Hickels writes about solutions: “Decommoditizing and universalizing healthcare, education and even housing would be a step in the right direction. Another would be a universal basic income – perhaps funded by taxes on carbon, land, resource extraction and financial transactions.” Josh Hoxie suggests children’s savings accounts, funded by the government and disbursed at age 18, would give youth a financial base to build on. Steve Grumbine writes that the federal government, unlike state governments, has the power to create money and can operate at a deficit. In other words, we could afford solutions to the crises we face right now. It is up to us to demand them. 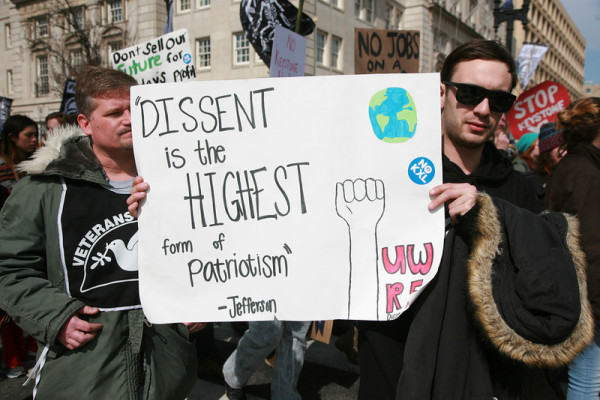 We urge you to contact your members of Congress (202-224-3121) and insist that they do not vote for the current tax plan. We need a louder public clamor about this issue because it is largely missing from the commercial media.

And while you are at it, please urge Congress to stop the FCC from dismantling net neutrality. The FCC is set to vote on Verizon lawyer, chairman Ajit Pai’s, proposal on December 14. So far this month, more than 200,000 people have called Congress using this tool at BattlefortheNet.com. On December 7, there will be protests at Verizon stores across the country. And Popular Resistance’s Protect Our Internet campaign is planning actions at the FCC on December 13 and 14.

Net neutrality protects the Internet as a tool for Free Speech without discrimination. Losing net neutrality means that in addition to making greater profits by charging more for access to content (like cable tv does), telecom giants such as Verizon, Comcast and AT&T can suppress access to alternative news sites such as ours. Google is already doing that. CEO Eric Schmidt recently admitted that Google “is, in close coordination with the state, manipulating search results to censor sites critical of the US government. The “fake news” scare is also being used to undermine independent journalism and social media that criticizes the government.

The future is ours to determine. It is up to us to end the culture of exploitation. Just because the United States was built on a legacy of genocide and slavery does not mean that it has to continue to function this way. We can learn the truth, discuss it in our communities and take action to withdraw our support for racist and unjust systems. We have the power to defeat the elites through concerted action.