Newsletter: Is Health Care A Commodity Or Right?

With just a week left before Congress’ budget reconciliation process ends, the Senate is once again peddling a poorly-thought out plan to repeal and replace the Affordable Care Act (ACA). If Senators vote before the September 30 deadline, they only need 50 votes instead of the filibuster-proof 60 votes to pass amendments. And once again, people are rising up in opposition to the plan, making it unpopular and unlikely to pass.

At the same time, support for a National Improved Medicare for All single payer healthcare system is increasing and there are bills in both the House and Senate with record numbers of co-sponsors. Will the United States finally join the long list of countries that provide healthcare to everyone?

Overall, it is a time to be optimistic. The movement for National Improved Medicare for All has made great strides this year. Whether we succeed still hangs in the balance. We discuss what it will take to win and how to proceed.

Join Health Over Profit for Everyone (HOPE) , a campaign for National Improved Medicare for All. 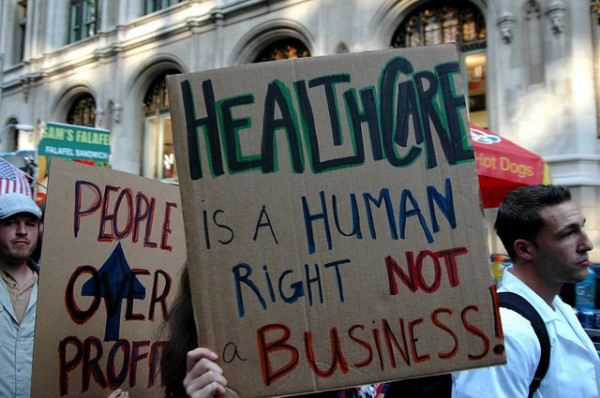 Efforts to create a national health insurance have existed in the United States for the past 100 years. Health historian, David Barton Smith, writes (in a draft chapter) that the fundamental struggle in the US has been over the question of whether health care is a commodity that belongs in a market or whether it is a basic necessity that requires the protection of government so that it is universal. Smith breaks up the past one hundred years into five phases and argues that in each phase, compromises were made that failed because they did not meet the fundamental criteria of covering everyone and achieving effective governmental oversight. He refers to these compromises as “more palatable approaches” that were considered to be politically feasible, but each “self-destructed.”

These failures, including the most recent ACA, have driven health care deeper into the pockets of private industry from the provision of medical services to the the production and distribution of pharmaceuticals and medical devices. Doctors are turning their practices over to large institutions, “going corporate,” in order to have the negotiating power to simply exist in this environment. Mergers by health insurers, hospitals and pharmaceutical companies have been acts of desperation, as each sector fights for control. But the bottom line in this fight is profit for a few, not health for the many, and so it is the public who suffers. Dr. Adam Gaffney traces and explains this trend from the 1940s to the present in “The Neo-liberal Turn in American Health Care.”

Make no mistake, currently, in the United States, health care is a commodity, and the profiteers are going wild. Since passage of the ACA, major health insurance company stock values have quadrupled. And they are never satisfied. Democrats and Republicans in Congress are discussing a “bipartisan approach,” as outlined by the Center for American Progress, which is funded by health industry lobbyists, to fix the healthcare system. Their plan is to give billions of more dollars to the industry to encourage it to cover our healthcare needs. They refer to this as “stabilizing the market.”

Any person who says that health care is a right or basic necessity but supports keeping the existing market-based structure is either confused or lying. The market model of health care is a failure. Even Fareed Zakaria, conservative host of CNN, understands this.

This history is important because the elites in power are working to maintain their grip on the system. Incrementalists were out in full force after the failure of repeal attempts this summer. Writers who claim to be progressives argued that those who want National Improved Medicare for All are asking for too much, that it is just not politically feasible and that we must compromise. But what they might consider to be doable won’t solve the healthcare crisis.

Incremental steps that were taken in the past did not succeed because they failed to meet the basic requirements of being both universal and properly overseen by the government. This is why we say that the smallest incremental step that we can take in the US is to create a National Improved Medicare for All, a universal publicly-funded healthcare system that relegates private insurers to a supplemental role to provide extras that the system does not cover. Beyond that, there will still be a lot to do to make sure everyone has their healthcare needs met. 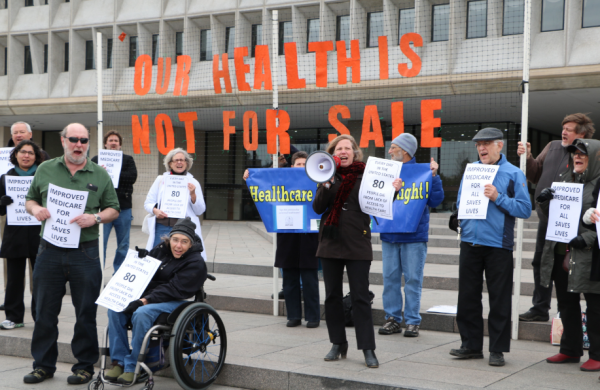 National Improved Medicare for All is on the table

A victory this year is that there are bills in the House and Senate that outline a National Improved Medicare for All healthcare system, and they have record numbers of co-sponsors. HR 676 is considered the ‘gold standard’. It has been introduced every session since 2003 and it has broad support from the single payer healthcare movement. It would truly treat health care as a public necessity and not a commodity.

Under HR 676, all people living in the US would be included in the system, there would be free choice of health professional, the coverage would be comprehensive and care would be provided as needed without financial barriers. HR 676 would create a publicly-financed not-for-profit healthcare system. It currently has 119 co-sponsors, all Democrats, plus Rep. John Conyers, who introduced it.

S 1804 is the Medicare for All Act in the Senate that was introduced on September 13 of this year by Senator Sanders with 16 co-sponsors, all Democrats. It has strengths and similarities to HR 676 as well as weaknesses. Its strengths are that it endeavors to achieve a universal Medicare for All system with more comprehensive coverage than what most people have now. It has strong language protecting women’s reproductive rights and it removes most co-pays and deductibles.

The weaknesses of S 1804 prevent it from fully transforming our healthcare system to a public service. Investor-owned facilities are permitted to continue to operate within the system and budgetary controls that might restrain them were excluded from the bill. Another weakness is the exclusion of long term care and keeping it in Medicaid, which forces people and their families to live in poverty to receive benefits.

Perhaps one of the greatest concerns about S 1804 is the long transition period. Most universal systems are started at once – on a certain date everyone is in the system. This is how we did Medicare as a totally new system in 1965 before we had computers. The delayed implementation period over four years is such a complex transition that there are concerns it will proceed poorly and support for a universal healthcare system will disappear before it is complete. With complexity, comes greater costs. HR 676 would start all at once, which would not only allow the savings needed to cover everyone but would also put us all in the same boat so that we all have an interest to fix any problems that arise.

Jim Kavanaugh of The Polemicist argues that S 1804 may actually be a “Trojan Horse” for the Democrat’s favored proposal, a public insurance they refer to as a ‘public option’ being added to the current mix. We call the ‘public option’ a “Profiteer’s Option” because it will serve as a relief valve for private insurers to jettison people who need care.

Health Over Profit for Everyone (HOPE), a campaign of Popular Resistance, sent a letter to Sanders before he introduced his bill urging him not to compromise from the start. Thank you to all of you who wrote to his office. 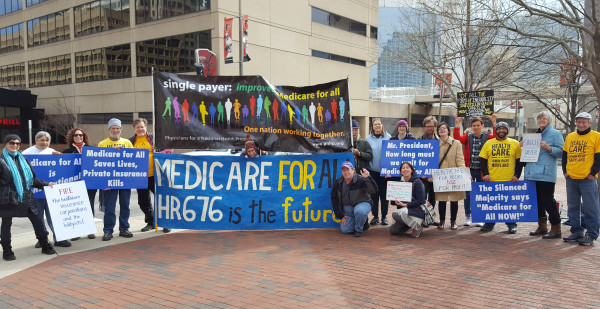 Winning the fight for a National Improved Medicare for All healthcare system is possible. It will take preparation and hard work. Our opponents are those who profit from the current healthcare system, such as the pharmaceutical companies behind the opioid epidemic, those who are ideologically opposed to public safety nets, the commercial media, as Yves Smith describes, and legislators from both major parties, even those who claim to be progressive, because our political system is dominated by Wall Street. We can’t be fooled by progressive veneers. President Obama’s ACA was written by and for the medical industrial complex to enrich the few, and he is already receiving hundreds of thousands of dollars for Wall Street speeches.

We counter our opponents through the principals of I.C.U.:

I =Independence – we must be independent of political parties and willing to pressure all members of Congress, the White House and federal institutions to achieve the healthcare system we need. We cannot attach this movement to any political party or politician’s agenda. To have lasting success, this needs to be a multi-partisan effort on the movement’s terms. If one party or person takes ownership, then the issue can become a political football, as the ACA has become.

C = Clarity – we must educate ourselves and others about basic health policy so that we understand what elements are required for the system to meet our goals and our needs. We will be the watchdogs for the system to make it the highest quality system it can be. This includes understanding which proposals are insufficient too, such as the much-promoted public option and lowering the age of Medicare.

U = Uncompromising – we must stay strong and united around the basics that we need to achieve for the National Improved Medicare for All healthcare system to function. We are often told that politics involves compromise, but some compromises undermine our goal. Movements for social transformation have always been told they are asking for too much. We are asking for what many other countries have and what we are already spending enough money to have – a healthcare system that is universal high quality and comprehensive. We spend more than twice per person per year what other countries spend that have achieved this. For those who say we should have anything less than a universal system, we ask: who should be left out? 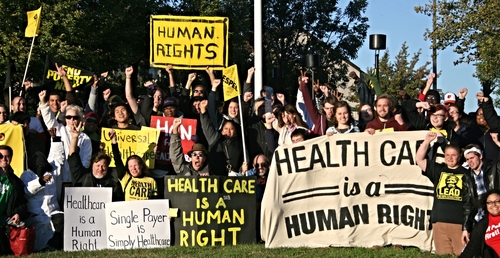 The People will Win Improved Medicare for All

Our goal for the HOPE campaign is to achieve National Improved Medicare for All. We provide the tools and information you need to accomplish this. Sign up for HOPE here.

People across the country are organizing teach-ins and movie nights, doing outreach in their communities, attending town halls and meeting with their members of Congress. We urge you to join the effort and join the monthly education and organizing national calls.

When we win the fight for a universal healthcare system, it will represent a political sea change in the US that will bring solidarity and empowerment to fight for the many other changes that we require. Health is connected to having an education, a job, a home, clean air and water and much more.

As medical student Mike Pappas describes, we need to look beyond access to care and recognize that:

It’s time for a real healthcare revolution of, by and for the people!