Newsletter: Internet Freedom Is Fundamental, We Might Lose It

Once again, the Internet is under attack by the Telecom industry that seeks to control its content. Internet Freedom is fundamental. Imagine if we lost access to the people’s and independent media or if we couldn’t use the Internet to organize actions and events. 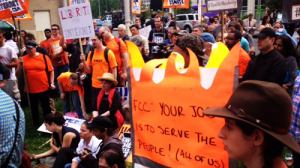 In 2014/15 Popular Resistance was part of a successful campaign to reclassify the Internet under Title II of the Telecommunication Act so it was a common carrier where everyone had equal access. Title II gave the FCC legal authority to put in place net neutrality rules to ensure that Internet Service Providers (ISP) were content neutral. Net neutrality is the simple principle that Internet providers should treat all traffic on their networks equally.

It was a massive show of people power that won in 2014/15 with 3.7 million comments — the most the FCC had ever received for any issue — protests throughout the country and constant pressure on the FCC. Popular Resistance occupied the FCC, interrupted meetings, protested the telecoms, produced a musical outside of the FCC and blocked Chairman Tom Wheeler at his house in Georgetown.

Now, we must protect the free and open Internet again. Donald Trump appointed Ajit Pai, a commissioner who opposed Title II and net neutrality, to be chair of the FCC. Pai is a former Verizon lawyer who is representing the interests of ISP’s like Verizon and Comcast rather than the public interest.  It is going to take another mass mobilization, probably larger than the last one, in order to protect net neutrality. 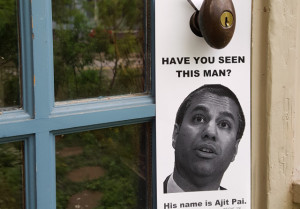 We started a campaign, Protect Our Internet, see the website and Facebook page (like the page and share it). We have already taken initial actions with our coalition partners, including protesting Ajit Pai when he spoke at the American Enterprise Institute on Friday. This weekend we are going to Ajit Pai’s neighborhood in Arlington, VA to let his neighbors know that he is working to destroy the Internet by putting door hangers at their homes. Knock, Knock, It’s Net Neutrality! Next weekend, we will protest at his house. More is planned. Sign up on Protect Our Internet so you can be part of this campaign and click here to take action by sending Ajit Pai an email.

Ajit Pai and the Telecoms are lying. President Trump doesn’t seem to understand the issue.

Trump tweeted that net neutrality is a top-down “power grab,” a telecom talking point that is the reverse of reality. Ending net neutrality will create a top down rather than free and open Internet, where a handful of telecoms will control access to the Internet and what we can see on the web.

Pai is open in his opposition to net neutrality, which raises questions about whether the upcoming rule making proceeding is illegally biased. But not only is he seeking to weaken the net neutrality rules, he wants to get rid of them entirely. He would even throw out widely popular rules that bar internet providers from blocking access to particular sites and services.

Pai claims there is now less investment in the Internet, when in fact investment has increased. He claims the rules are a radical departure for Internet regulation, when in fact some sort of net neutrality has been in place for more than a decade. In fact, the reason for the reclassification in 2015 was because the court said that the Internet needed to be in Title II in order for the FCC to enforce net neutrality. 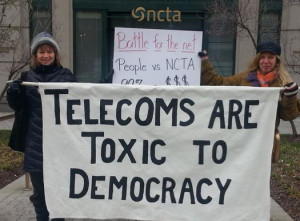 The telecoms are even more dishonest, piling lie on top of lie. The telecoms have fought net neutrality every step of the way. They challenged the old rules in court and won, and challenged the 2015 rules in court and lost. Yet, they claim in their advertising that they support net neutrality, they only oppose the Title II classification of the Internet. Of course they know, since they litigated the case, that Title II is essential to having enforceable net neutrality rules. The telecoms, companies like Comcast and Verizon who are some of the most hated corporations in the country, promise to follow net neutrality even without FCC rules. Yeah, right.

One of the major problems with the telecoms is they are now also providing content on the Internet. Comcast owns NBC/MSNBC and Verizon owns Huff Post. This has already caused conflicts. Previously, the FCC accused AT&T and Verizon Wireless of violating net neutrality rules by exempting their own video services from mobile data caps while charging other content providers for the same data cap exemptions. Pai opposed the investigation and the FCC rescinded its findings under Pai giving ISPs the green light to continue. Will MSNBC get special treatment that FOX, CNN and others do not?

There is also competition between cable companies and online video like Vimeo, Netflix and YouTube. Jamie Wilkinson, CEO and co-founder of Vimeo subsidiary VHX, said that “cable companies are threatened by up-and-comers like us who are providing competing video services that run on the same pipes. It’s not surprising that they’re trying to stack the decks in their favor, which is exactly what changing these rules does.” 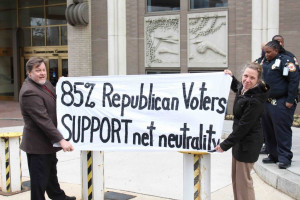 Pai and the telecoms have to deceive the public because net neutrality is very popular. This really is the people vs. the telecoms.

Why Ending Net Neutrality is a Bad Idea

What makes the Internet great is that it is equally open to everyone. The Internet is a true community of ideas, new products, new services and innovation. Ending net neutrality will undermine the Internet. Net neutrality means that no one can pay for better or faster service, no one can be blocked if their content is legal, no can be silenced for unpopular speech and start-ups and entrepreneurs have the opportunity to create new products and services – all because people can go on to a free, open and equal Internet.

When Pai announced he planned to reverse the Title II net neutrality rules a group of 800 start-ups sent him a letter objecting to the plans (since the initial letter Start-Ups For Net Neutrality say 200 more have signed on). The core argument made in their letter is:

“The success of America’s startup ecosystem depends on more than improved broadband speeds….Without net neutrality, the incumbents who provide access to the Internet would be able to pick winners or losers in the market. They could impede traffic from our services in order to favor their own services or established competitors. Or they could impose new tolls on us, inhibiting consumer choice. […] Our companies should be able to compete with incumbents on the quality of our products and services, not our capacity to pay tolls to Internet access providers.”

Similarly, the Boston Business Journal reports that net neutrality changes would ‘kneecap’ entrepreneurs.  Tech trade groups are planning to fight Pai on the issue because they say the rules help ensure online competition and a better user experience. Silicon Valley seems to be preparing to defend net neutrality too. 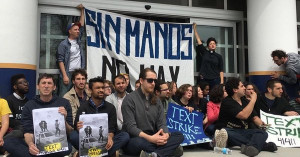 The Internet is also critical to political speech. Where would Black Lives Matter be if the Internet could not have been used to widely share video of police brutality that has led to the deaths of so many? Where would the Fight for $15 be without the ability to let people know there was a broad based movement to end poverty wages. Where would the movement for immigrant justice be if people could not see the videos of widespread protests against orders to deport people and prevent people from coming to the United States; or unable to show families fighting to prevent injustice against immigrants from tearing them apart.

On every issue, people’s access to the Internet where social media, independent media and non-profit media can tell truths the commercial media will not tell is critical. The first step in making transformative change is educating people that change is needed. The Internet and social media are key to telling people what is happening in their communities and throughout the country.

The Movement Can Protect the Internet

If the people are mobilized and they are joined by tech companies and those that provide content for the Internet, we can defeat Pai and the telecoms. This will be another battler of people power vs. the power of big business money. We have confronted that before and won; and we can do so again this time.

Chairman Pai plans to formally start the process of ending net neutrality at the FCC’s public meeting on May 18. This is an important time to impact him.

If you are in the DC area, join us on May 7 at 1 pm to deliver door hangers in Arlington, Va. We will also protest in Arlington on May 14. And we will have actions at the FCC on May 16 and 18. Visit our Protect Our Internet Facebook Page for details and sign up at ProtectOurInternet.org so we can keep in touch with you. Contact us at info@popularresistance.org if you want to get involved.

This is a new campaign that we have had to launch quickly. Please donate here if you can chip in to cover the new website, our new organizer and materials for the campaign. 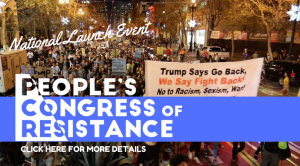 We also want to alert you to an important event this Fall. It’s the People’s Congress of Resistance where we will gather to network and strategize in order to build our movement for peace and social, economic, and environmental justice. Watch the launch on live stream at 3 pm Eastern on Sunday May 7. Click here for more information.