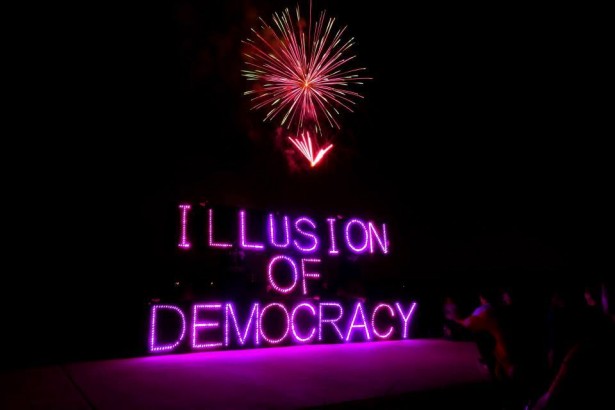 Newsletter: Living In The Illusion Of Democracy

The United States is in the peak of the very long election year. The presidential debates are running in full swing. The media is deep into coverage of Donald Trump and Hillary Clinton. And, the people are feeling unrepresented.

The Democrats and Republicans Have Created Fraudulent Debates

The hubris and manipulation of the two establishment parties is evident in the presidential debates. The two Wall Street-funded parties decide who is allowed to participate in the debates. The so-called debate ‘commission’ is a disguise apparatus of the Democratic and Republican parties. It is a commission in name only, in reality it is a corporation created by the two parties and controlled by the two parties. When the disguise is removed, it becomes obvious that the Democrats and Republicans are choosing to only debate Democrats and Republicans, and preventing any competition.

In 1988, the Republican co-founder, Frank Fahrenkopf, who remains a co-chair, indicated at the news conference announcing the ‘commission’ that they were “not likely to look with favor on including third-party candidates in the debates.” The New York Times quoted the Democratic co-founder, Paul Kirk, saying: “As a party chairman, it’s my responsibility to strengthen the two-party system.” As a result, there has not been a third party candidate in the debates for 24 years, even though there have been third party candidates on enough ballots to win a majority of electoral college votes in every election. Closed debates create the illusion that there are only two candidates running for president.

When the ‘commission’ was founded, the League of Women Voters warned that the parties taking over the debates would “perpetrate a fraud on the American voter.” They resigned their historic role as the non-partisan sponsors of the debates because they refused to be “an accessory to the hoodwinking of the American public.” They foretold the truth, and now we must all work to undo the hoax.

This year, 76% of voters want four-candidates in the debates. A majority of people in the US believe neither party represents them. The two parties are shrinking and now each make up less than 30% of the voters, with a record 50% of voters considering themselves independents. The two establishment parties have nominated the two most unpopular candidates in history with six in ten voters disliking Clinton and Trump.  An Associated Press/GfK poll found that four out of five voters fear at least one of the two nominees, and 25% fear both, a number confirmed by Gallup. Three-quarters of those planning to vote will do so based on whom they dislike rather than whom they support.

This is why three-quarters of voters want Jill Stein of the Green Party and Gary Johnson of the Libertarian Party included in the debates – people want more choices. Both will be on almost every ballot but voters will not get to hear from them and learn what they stand for. The dislike of the two parties and their candidates is also why the fake ‘commission’ must do all it can to prevent voters from knowing that they have more choices for president.

And, they have an ally in the media which expects to receive $6 billion in political advertising in 2016.The media wants that advertising more than they want a real democracy. As the CEO of CBS  said, “Super PACs may be bad for America, but they’re very good for CBS.” As a result, you will see no criticism of the fake debate commission. Jill Stein was able to briefly sneak in an article on The Hill website about her experience during the first debate last week, i.e. being excluded from the debate, escorted off campus when she was doing media interviews, holding a people’s debate outside the debate area and 22 people being arrested for protesting the closed debates, as well as how her campaign used social media to break through. The article was up briefly, but quickly disappeared from the front page.

In almost every election a large majority of US voters want more candidates in the debates but the phony commission serves as a blockade, preventing real democracy.  If we want a democracy that is of, by and for the people, it is critical we end the debate commission’s fraud on US voters. Rather than creating barriers to participation, the rule should be simple and objective: if a candidate is on enough ballots to win 270 electoral college votes they should be included in the debate as very few overcome the ballot access hurdles placed before independent parties.

The United States is in a Democracy Crisis

The fraudulent debates are one example of many of how US democracy is manipulated and managed to ensure that only candidates who represent the wealthy can be elected. The Associated Press-NORC Center for Public Affairs reported this year on the extent of the democracy crisis. They found the legitimacy of US government has disappeared:

There is close to unanimous consensus that the elections fail voters and do not create a legitimate government. The poll taken as the primary season came to a close found “only 13% say the two-party system for presidential elections works.” The elections have left most Americans feeling discouraged with 70% saying they experience frustration and 55% reporting they feel helpless. Only 13% feel proud of the presidential election.

The excluded parties are taking unusual steps to reach voters. Jill Stein accomplished a historic breakthrough during the first presidential debate, by using cutting edge social media tools to insert her live voice into the debate in real time. The Stein-Baraka campaign used Facebook, Twitter and Periscope to reach approximately 15 million voters within 24 hours of the first debate, “Jill Stein” trended at #1 on Facebook on debate day and Google searches spiked with one of the top search phrases being “How do I vote for Jill Stein?”  No 3rd party candidate has reached such a large audience since Ross Perot was included in the debates 24 years ago. But, this cannot compete with the two party debates which appeared on every network with an audience of more than 80 million and constant discussion in the media leading up to the debate and after it.

During the upcoming vice presidential debate on Tuesday, candidate Ajamu Baraka will be using the same social media tools as Stein as well as being inserted live into the debates by Democracy Now. Baraka will answer every question as if he were included by pausing the debate and then returning to it after he answers. This three-candidate debate can be viewed on Jill Stein’s Facebook page and website, as well as on Ajamu Baraka’s Facebook page and on Democracy Now.

Presidential debates are not only about getting someone elected, they are also about setting the political agenda for the country. With only the Democratic and Republican nominees included many key political issues are not being discussed. The debates spend a lot of time on nonsense while ignoring many important issues that impact the lives of the people of the United States as well as ensuring a liveable planet.

In the first debate, time was spent on whether President Obama was born in the United States, or whether Donald Trump’s criticism of a former Miss Universe was inappropriate. But there was no discussion of tens of millions of people living in poverty, what the country can do to confront climate change, how to erase student debt or whether the United States should be an empire.

In fact, the word “empire” has never been in a presidential debate as the political elites do not want to discuss the reality of US global domination. They do not want people considering that an empire economy is the reason for many of our economic problems. These are a few issues among many that will not be discussed this election season.

And, if an issue like healthcare is discussed there will be no one on stage who represents the views of the 60% of voters who support a single payer, improved Medicare for All, because neither of the establishment party nominees do. There will also be no one on stage to talk about key movement issues like the systemic racism exposed by Black Lives Matter, the wealth inequality demonstrated by Occupy, and the protests against pipelines by Indigenous Peoples and communities across the country. On these and many other issues there will be no discussion or only discussion from the point of view of two Wall Street-dominated parties. The political agenda will be warped and ignore the people’s concerns.

We Must Mobilize for Real Democracy

The divide between the people and government is a growing chasm. As we can see on the Popular Resistance website, large numbers of people refuse to accept the injustices we are suffering at the hands of a government that fails to represent the people’s interests. An election designed to ensure the oligarchs win will result in rising anger which should lead to the protest movement growing as people fight against politics for the wealthy that put the profits of donors ahead of the people’s necessities and protection of the planet.

The people are not powerless. Right now, people need to be protesting the debates manipulated by the two parties.

The people are developing a consensus that would transform the nation into a real democracy where the people rule, where the economy is fair, where the necessities of the people are met and the environment is protected. There is amazing agreement among the people. The division is between the people and the government which represents the wealthy.

It does not have to be this way. Everyday more people are seeing that democracy is an illusion. The fraudulent two-party debates are an example so blatant that when people understand it, then they also understand that the elections are manipulated. Once people understand that the government is illegitimate, because it is designed not to represent people, then they will have the spark to organize and mobilize in order to take action to create the future we want to see.