Decades of neoliberal economic policies in the United States and debt, which is required by the bottom 90% to survive, have fanned political unrest and the call for transformation, rather than reform.

Just as Obama and the Democrat’s populist façade disintegrated under a growing wealth divide, worsening climate change and militarization of our communities and woke many self-described progressives up to the need for systemic changes, the Trump presidency could have similar effects on conservatives. Voters who thought they were ending the status quo, “draining the swamp,” by voting for Trump may find that loss of health care, trade deals that drive a race to the bottom and tax cuts for the wealthy move them to be open to solutions they may have once rejected.

The other possibility, as Richard D. Wolff points out, is that if by “playing on race and ethnic (and also regional and educational) differences, [Trump] postures as their champion, the only leader who will favor them by protecting them against the threatening long-term descent into poverty and degradation,” then this would fuel racism and nationalism and the rise of a violent right.

Thus, tasks of the movement for social transformation are to reject ideologies and groups that foster white nationalism and demonstrate that there are root causes to the crises we face and solutions to address them. 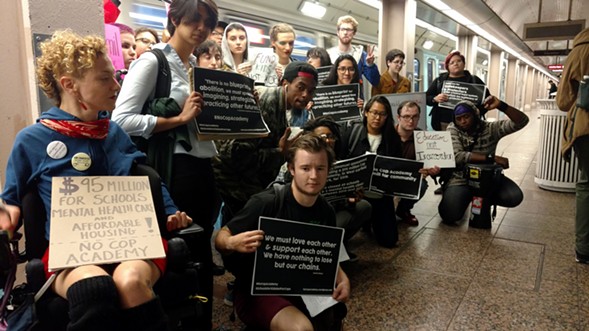 There is no guarantee that policy changes will bring us to a more just and equitable society if the cultural norms are still rooted in imperialism, capitalism, racism and patriarchy. For example, the transition to a clean energy economy will be primarily for the wealthy if it is based in the market. Like Internet service, hospitals and banks, low income communities will miss out while rich communities will have more than they need.

William Hawes writes that the reason social democracy works in Scandinavian countries is because there is a culture of solidarity. Quite the opposite exists in the United States, particularly for conservatives. Hawes describes four beliefs that prop up our current culture: The Puritan/Calvinist belief that there will always be poor people, the Monroe Doctrine belief that the world is ours to conquer, Social Darwinism that believes certain people are inferior and Positivism, which neglects to take humanity into consideration. Positivism, he explains, leads to materialism and over-medication in our population.

An antidote to these beliefs is to promote the common wealth. Rivera Sun writes that pursuit of individual wealth has been destructive to common wealth, often requiring exploitation of peoples and places. Common wealth is much broader than material wealth, it includes “our society, communities, knowledge, beliefs, practices, culture, arts, stories, myths, philosophies, psychologies, healing arts, education, innovation, expression, and connection… the ‘wealth and prosperity’ of the forests, oceans, plains, rivers, skies, glaciers, mountains, deserts, lakes, and so on.” Sun sees the culture shifting to embrace ways of living that are more cooperative and sustainable. 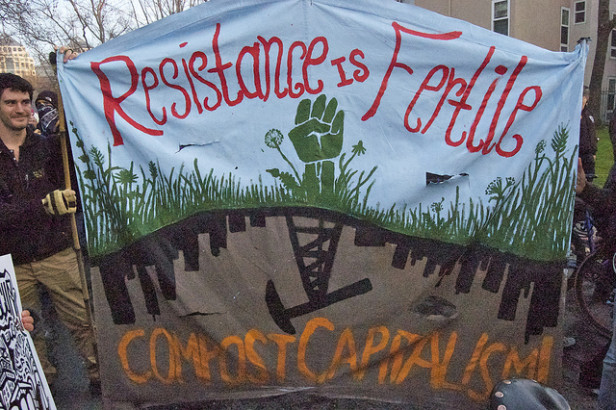 Across the United States and around the world, people are coming together to do more than protest, they are defining what positive solutions they want to put in place and are working to change the underlying systems. There are exciting campaigns and gains that are being made.

People from the United States and Canada who have been fighting the privatization of water met in Flint, Michigan to form a new coalition focused on the Great Lakes area. Nestlé has been a big problem on both sides of the border because it preys on small towns and takes water with little compensation to communities, so they are calling for a boycott of all Nestlé products and are working to end bottled water as a commodity.

There is also a growing campaign against privatization of education. Secretary of Education Betsy DeVos is being protested wherever she goes.

Dominion Energy has long dominated politics in Virginia and surrounding states, but that is changing. People have been organizing to stop Dominion Energy’s fossil fuel projects and now state agencies have started denying Dominion’s requests. In California, where PG&E’s poor maintenance of electrical infrastructure may have caused some of the deadly wildfires, there are rumblings about placing PG&E under public control. And union workers are calling on the AFL-CIO to fight for a transition to clean energy. In the past, unions have supported dirty energy projects because they meant jobs, but those jobs come at a cost to the planet and the health of workers.

Last week, Popular Resistance and allies organized actions in Washington, DC to protest the re-negotiation of NAFTA during the fourth round of talks. The Trump administration is pushing to include many of the provisions we opposed in the Trans-Pacific Partnership and Trans-Atlantic Trade and Investment Partnership such as corporate courts and other corporate power grabs. We are calling for a new model of trade that protects people and the planet. The next round in the United States will be in December. We need to have an even greater presence there. Please sign up at TradeforPeopleandPlanet.org if you are willing to join us.

Recent victories include a New York Supreme Court ruling against a private prison’s attempts to hide information on immigrant detentions. In Colorado, the ACLU wrote a report about the unjust practices of a particular judge, and now they are working with the city council to reform the court. In Chicago, youth have organized amazing days of actions to stop a $95 million police training academy and redirect that money back into communities where schools have been closed.

Public banks are gaining traction in Los Angeles and Oakland. Public banks save cities millions of dollars that would otherwise go to Wall Street and can be used to fund projects that benefit local residents. Ellen Brown of the Public Banking Institute also writes that Puerto Rico’s debt can easily be erased by quantitative easing, the same mechanism that bailed out the banks in 2008.

And the call for peace is rising. Thousands of women, both Israeli and Palestinian, marched together for two weeks calling for peace talks. Next weekend, the Divest from the War Machine summit will take place in Washington, DC. And Veterans for Peace are calling for Veteran’s Day to be celebrated as it was originally intended, Armistice Day, with activities focused on peace. 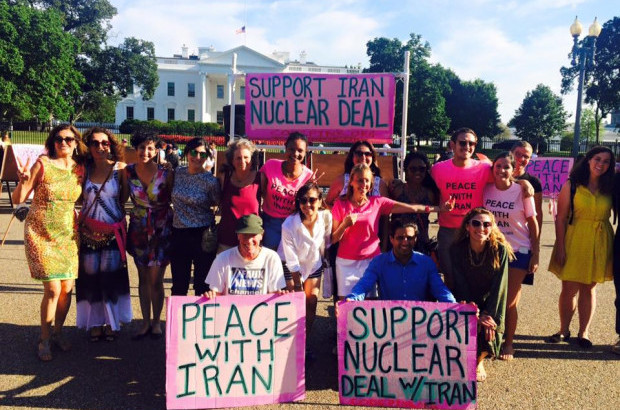 In “A Tale of Two Islands,” Vijay Prashad compares the situations in Cuba and Puerto Rico after the devastation of recent hurricanes as a way to compare a socialized state with a neo-liberal state. In the poor country of Cuba, steps were taken prior to the hurricane to protect people and infrastructure and to prepare for their needs after the storm. As a result, fewer people died and power was restored within a few weeks. In Puerto Rico, a US colony ravaged by debt and austerity, the death toll continues to rise as people go without water, food and power. It will take many months to restore the electrical infrastructure.

We too can choose whether we want a future of solidarity where human needs and protection of the planet come before profits or whether we will continue down the path where corporations and the politicians they fund deny access to basic needs to satisfy their shareholders. The impacts we are experiencing are the result of human-made systems and those systems can be changed and must be changed if we are to solve the crises we face.

William Hawes closes with a quote from Marcos about building “…an intercontinental network of resistance against neoliberalism… in which distinct resistances may support one another. This network of resistance is not an organized structure; it doesn’t have a central head or decision maker; it has no central command or hierarchies. We are the network, all of us who resist.”

There is much to do and we can all do something from helping each other to meet our needs, educating ourselves and others about what is going on to participating in campaigns to end harmful practices or build new systems. You are the Popular Resistance.

As we celebrate our sixth year since the Occupation of Freedom Plaza in Washington, DC, enjoy this compilation of some of the actions we have organized or joined.