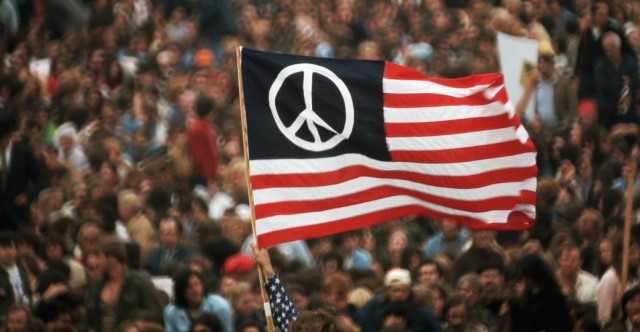 Today is the fifteenth anniversary of the attack on the World Trade Centers in New York where 3,000 people died. The immediate responses to the attack were panic, grief and ultra-nationalism, followed by illegal attacks on Afghanistan and then Iraq. Perhaps now that 15 years has passed, we should look back at the events and review decisions that were made in hopes of avoiding mistakes in the future. The leading presidential candidates, Donald Trump and Hillary Clinton, seem stuck on the same path we have been on for 15 years — is more militarism the right path? Have war and military attacks made the region more stable, the United States more secure, reduced terrorism, prevented instability in Europe due to the refuege crisis? Or, has the path of militarism made all of this worse?

Philip Weiss interviewed retired military lawyer Todd Pierce, who also works with Veteran Intelligence Professionals for Sanity, about his life experiences, US foreign policy and the state of affairs in the US today. Here are links to Part I, “Everything We Have Done Since 9/11 is Wrong,” and Part II, “United States of Innocence.” They contain serious food for thought.

Pierce points out the history of lies used to by the government to justify military intervention around the world and describes the power structure that controls people who are in the system. He also makes the points that US military intervention is making the world less safe and is using resources that are needed at home and that mechanisms are in place to quell dissent if it is deemed necessary by those in power.

Retired Air Force officer W. J. Astore writes that the events of 9/11 started a century of calamity. US intervention and violence throughout the Mid East have caused chaos, created failed states and fueled anti-US sentiments. More violence will only make the situation worse, but the current system cannot stop itself. In fact, the US seems to be on a path to a war with Russia.

Looking back at the events of 9/11, it is clear that the US population was manipulated into wars at a time when people were afraid. Fear is a potent tool that continues to be used today in many arenas, particularly in elections at this moment. But courage conquers fear.

To change course, we must have see through the manipulation and have courage to take action. This won’t be easy, but nothing worthwhile is ever easy. S. Brian Willson, a long time peace activist demonstrates what it means to have courage. The new documentary, “Paying the Price for Peace,” chronicles his life and the sacrifices that he has made.

We need an inquiry into everything that was done since 9/11. With the release of previously redacted pages of the joint House-Senate committee on 9/11 it is evident that there were members of the Saudi Royal family who supported some of the attackers. In addition, the 9/11 commission report, by the admission of the co-chairs, was inadequate. In The Inside Story of the 9/11 Commission, Thomas H. Kean and Lee H. Hamilton, wrote “we were set up to fail” and described their lack of access to critical documents and other evidence as well as inadequate time and money. Harper’s Magazine described the 9/11 Commission report as “whitewash as public service” – a document that “defrauds the nation.” The new inquiry needs to not make the mistakes of their effort. It needs to be given sufficient money, time, and access to relevant classified information.

Then the US must honestly look at all the wars, including the two longest in US history, Afghanistan and Iraq, and question whether these were the right decisions. At the time of the attack many suggested the best approach was not war, but legal action: sending in commandos to capture those accused and bring them to an international court for investigation and trial. The blunt force of war seems to have been ineffective but the US is unlikely to stop and critically think.

Facing the truth means exposing the lies that are being used to manipulate us. It also means demanding that those who lie are held accountable. And it means sticking together to weather the attacks that will inevitably come as we confront the power structure.

We need to work for an end to war as an acceptable goal in foreign relations. We need to become a World Beyond War. Attend this important conference in Washington, DC to be part of the movement to end war.

Two weeks ago, we covered the courageous resistance in North Dakota in the struggle to stop the Dakota Access Pipeline. Since then, there has been a partial victory.

The situation escalated when Energy Transfers started bulldozing a sacred site. When peaceful protesters intervened, they were assaulted by private security using pepper spray and attack dogs. Six activists were bitten. Construction was supposed to be on hold pending a court decision on September 9.

On the day of the court decision, the governor of North Dakota brought out the national guard. The federal judge ruled in favor of the pipeline company, but due to the large protests and exposure of the fact that the government proceeded without consultation from the affected tribes, the Department of Justice, the Department of the Interior and the Army Corps of Engineers decided to halt construction on public land.

An update from the No DAPL Camp said:

Let’s be cautious about celebrating this.  On one hand it seems clear that our pressure is having an effect.   Let’s keep it up.

But we have seen time and time again a consistent strategy from the State in these situations: string out the process, break it to us gradually to avoid a big confrontation, present the illusion of careful thoughtful review of the case, tempt us with promises of modest reforms…but then in the end make the same decision that serves money not people.   So far this is just talk, not actions, and actions are all we should care about.

Stop the pipeline, and then we’ll celebrate.

We are not leaving until this is over.

We agree wholeheartedly with their approach. There is appropriate concern by those opposed to the pipeline about the government’s sincerity. Those with experience know that the government will give the appearance of responding to activist’s concerns in order to slow protests and will then later find ways to work around them. Millions have been spent by the pipeline company, Energy Transfers, on elections and billions in funds for the pipeline are on the line. Here are the banks behind it.

It will be necessary to continue the resistance until the pipeline is stopped for certain. The Sacred Stone camp is ongoing. Another camp was also started at a related site in Iowa. And we are in the midst of two weeks of solidarity actions across the country. A large protest is planned at the White House this coming Wednesday. Please support these efforts in any way that you can. Here is the Facebook page where you can find out what the needs are.

Other important struggles this year

We are in the crucial phases of a number of other struggles, which require our vigilance.

Congress is back in session and President Obama notified them that he intends to ratify the TransPacific Partnership (TPP) this year. Members of Congress are unwilling to show support for the TPP prior to the elections, but once election day has passed, they are no longer accountable to voters. This is why a vote is expected during the period after the elections, referred to as the ‘lame duck’.

Members of the TPP Resistance protested last Wednesday, Congress’ first full day back, in Washington, DC and delivered the “People’s Notice’ to Congress of their intention to do what it takes to prevent ratification. Thousands of people and almost 200 organizations have already signed up for the No Lame Duck Uprising. Click here for more information.

If the TPP is ratified, it will grant even greater power to corporations to control our laws, especially through the Investor State Dispute Resolution process. Hundreds of academics signed a letter of concern about this process, which operates outside of our own judicial system. The TPP would also worsen the wealth divide and adversely  impact communities of color the most.

Another critical fight is to open the debates so that voters are aware that they have other choices for president and can hear a broader discussion of important issues. The Campaign for Open Debates protested outside of Hillary Clinton’s headquarters in New York last week, and they will protest outside the phony Commission for Presidential Debates this Wednesday in Washington, DC. Click here to join the campaign.

And finally, a mass prison strike launched this week. We will report on this as it unfolds. Actions are taking place inside prisons and there are solidarity actions outside as well.

On this anniversary, let us have the courage to face the truth about what is happening in our country, recognize the impacts that our government’s decisions have globally and take actions together of resistance. Together, we have the power to stop the machine and create a new world.