Throughout history, there has been a force that elites in power fear the most. It is a popular movement that unites people in struggle across traditional boundaries. It is why they seek to divide us into silos based on race, class and ethnicity as well as on issues and place us in competition with each other for grants from large foundations. It is why they create front groups to take us off track with their non-solutions. 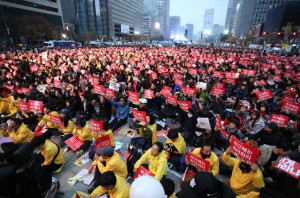 We know from more than one hundred years of research that a broad and massive popular movement has the power to win over any government, from a dictatorship to a democracy. We saw that most recently in South Korea where a popular movement brought down President Park Geun-hye, the corrupt daughter of a former dictator who was impeached. The people prevailed despite the illegal banning of an opposition political party, arrests of opposition leaders and severe restrictions on protest.

We chant: “A people united will never be defeated” because it is true and it is, as Chris Hedges recently explained, our key to overcoming the kleptocrats in power.

The Culture of Resistance

This past week a legendary activist, Bob Lee, died at age 74. Lee was a Black Panther who worked in Chicago with Fred Hampton until his murder and later moved to his original home in Houston, where he organized until his own death from cancer. Lee and Hampton brought people together across race and ethnicity in the first Rainbow Coalition whose unity scared the power structure, leading to Hampton’s murder. The idea of a Rainbow Coalition was later reinvigorated by Rev. Jesse Jackson for his own political purposes. 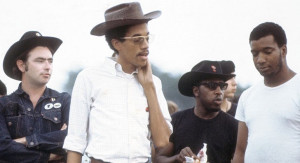 Historian Jakobi E. Williams writes, “As a polit­i­cal sym­bol, the Rain­bow didn’t refer just to a series of col­ors; it sig­ni­fied an arc of con­nec­tion between dif­fer­ent places and peo­ple. For Lee and oth­ers who par­tic­i­pat­ed with him in strug­gle, this was the only pos­si­ble start­ing point for rev­o­lu­tion­ary sol­i­dar­i­ty.”

Such a broad popular movement is building in the United States. Over recent years, solidarity between grassroots movements has grown. ‘Intersectionality’ has become a commonly-understood concept in activism. ‘Movements of movements’ have worked in coalition and achieved some victories. Groups like SURJ (Showing Up For Racial Justice) have worked with Black Lives Matter; Black Lives Matter has worked with Fight for $15. People are finding ways to work together and build power through unity.

As the kleptocrats escalate their attacks on our communities, we have a responsibility to each other to educate, organize and mobilize to fight back even more. Here are a few opportunities over the next month:

1. “The Majority” is a coalition of “black, Latino, the indigenous, LGBTQ, refugees, immigrants, laborers and the poor [who] will collaborate from April 4 through May 1, International Worker’s Day or May Day, when they’ll launch massive protests across the country.” They plan to begin with political education starting April 4, the anniversary of Rev. Dr. Martin Luther King, Jr.’s assassination. Immigrant rights groups and unions are joining the May Day actions with a call by the rank and file for strikes. 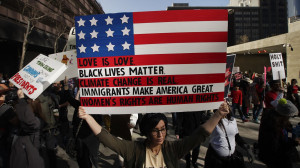 There is much to protest. Regulations to prevent wage theft by federal contractors were repealed by the Trump Administration. And Immigration and Customs Enforcement officers are pressuring sanctuary cities to comply through increased raids and arrests. Seattle is suing the administration over its threats to withhold federal funds because of its sanctuary status.

A critical point they make is to recognize that the struggles did not begin with President Trump and that they will not end with him. Organizers urge people to both resist and to “put forth a true vision of economic justice, and worker justice, for all people.” This is why their website is called “Beyond the Moment.” 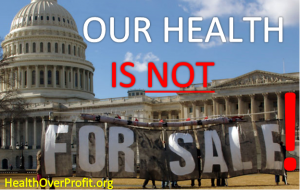 2. “Our Health is Not for Sale” is an international day of action against the privatization of health care. In the United States, the People’s Health Movement and Health Over Profit for Everyone are organizing actions coast to coast to educate about why health care is not a commodity and to push for a National Improved Medicare for All health system. It is important to be very clear about the solution to our healthcare crisis because there is talk of ‘fixing the Affordable Care Act’ by adding a public option, which is not a fix but a fraud to delay a real solution. The ACA, written by and for the insurance industry, is fundamentally flawed because it is rooted in the market — improved Medicare for all must become our national health policy.

April 3 to 7 is a national week to call-in and write-in to members of Congress to urge them to co-sponsor the House bill, HR 676: “The Expanded and Improved Medicare for All Act, and the complimentary Medicare for All legislation that Senator Sanders announced he will introduce in May. On April 7, actions are being planned such as teach-ins in Seattle, a march in New York City, a Speak Out in front of the Department of Health and Human Services in Washington, DC and more. Visit the Action Map to find one near you. Contact info@healthoverprofit.org if you want to plan an event. 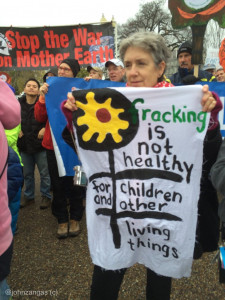 Fracking protests at the White House drew many from the state of Maryland including this one in 2015. Photo: John Zangas

3. The People’s Climate March will take place on April 29 in Washington, DC. There will also be sister marches across the United States. This comes at a time when the administration is waging an all-out attack on the planet. Funds for the Environmental Protection Agency are being cut significantly and climate scientists in the Department of Energy are not being allowed to use phrases such as ‘climate change’, ’emissions reductions’ or talk about the Paris Climate Treaty.

The marches will show that majorities of people demand climate action now. Other forms of resistance will be required using many tactics. This week, Earth Justice filed a lawsuit against the administration for opening more land to coal mining at a time when we need to end the use of fossil fuels.

One piece of good news this week is that the state of Maryland voted to ban fracking. It took years of organizing across the state to achieve under a Republican governor what Democratic governor Martin O’Malley refused to do. Governor Hogan saw the overwhelming popular support for the ban and did a surprise end run around the Democratic president of the senate, Mike Miller, who was stalling, to make the final steps in achieving the ban inevitable. 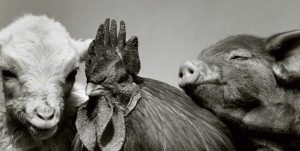 The Snuggle for Survival

Solidarity is not only essential for social movements, but scientists have discovered that it is also essential to our survival and evolution as a species.

Evolutionary progress can be propelled both by the competitive struggle to adapt to an environment, and by the relaxation of selective forces. When natural selection on an organism is relaxed, the creative powers of mutation can be unshackled and evolution accelerated. The relief of an easier life can inspire new biological forms just as powerfully as the threat of death.

One of the best ways to relax selective forces is to work together, something that mathematical biologist Martin Nowak has called the “snuggle for survival.” New research has only deepened and broadened the importance of cooperation and lifting of selective pressures. It’s a big, snuggly world out there. 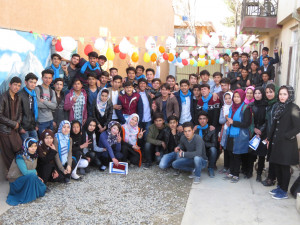 It is inspiring to see the grand movement of movements becoming manifest in the United States and around the world. We live in a transformational era. If we continue working together in resistance and creation of transformational alternatives we may find a new world that is better than we can currently imagine.

We only have one month until May Day. Let’s use our time well to organize and mobilize a protest that demonstrates our unified call for economic, racial and environmental justice.