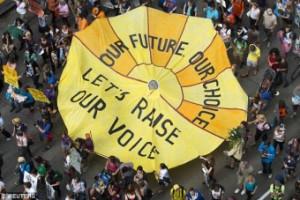 Newsletter: Only People Power Can Save The Planet

Above: From the People’s Climate March by Reuters.

In recent years the conflict has escalated between the people and energy interests due to the reality of climate change. There is national consensus to end dependence on fossil fuels, against big energy corruption of government, and its bi-partisan ‘all of the above’ energy strategy with massive new carbon infrastructure projects, and against the escalation of extreme energy extraction like tar sands and fracking. People on the ground in communities across the nation are standing up to big energy, corrupt government and extreme extraction – and they are having an impact. As the climate meetings approach in Paris, the climate movement should recognize its growing strength.

An annual survey of the US gas industry found that the two biggest problems the industry faces are opposition from communities and an unsure regulatory environment, which is largely the result of protests. Similarly a report released this week by Oil Change International finds that all of those marches, rallies, arrests, and inflatable pipelines are stopping or delaying tar sands pipeline construction in North America. Not only have they stopped the Keystone pipeline but the last major increase in Canada-U.S. tar sands pipeline capacity was the construction of the Alberta Clipper pipeline in 2010 with no new major pipelines being built since then.  The report finds that:

“. . . world leaders have pandered and caved to the powerful fossil fuel lobby: rubber stamping massive carbon-intensive infrastructure, unlocking billions of tonnes of new carbon in hard-to-reach places like the deep offshore ocean, the arctic, or hard-to-extract resources like tar sands, and proceeded to design energy policy around scenarios incompatible with a safe global climate. . .  It has been in this leadership vacuum that people have stepped up. Concerned citizens; be they grandparents, scientists, First Nations, business people, activists, civil servants, or students, a movement is growing that is not only demanding the safe, clean, and just energy future the world needs, but is building it.”

The impact of people power slowing, delaying, and stopping pipelines is keeping an incredible amount of carbon in the ground: the equivalent to shutting down 227 coal plants operating for 40 years.

This week, Shell Oil pulled out of a tar sands excavation in Alberta, Canada in part because there were no pipelines to move the dirty energy. This follows Shell’s decision to back out of Arctic drilling because of massive public pressure.

And, the problems are going to get worse for these companies. CDP, which works with over 800 institutional investors with assets of $95 trillion, asked 1,073 of the world’s largest publicly-listed companies about vulnerability to water-related risks. The response: roughly two thirds of oil and gas companies who responded say they are vulnerable to water risks and nearly half of those companies report that their bottom line has already suffered due to water issues. CDP reports that this places the industry in the ranks of the most vulnerable.

Water problems are tied into other foreseeable risks from climate – litigation holding companies that caused climate change responsible; regulations, laws and international agreements that put constraints on or add to the cost of carbon fuels; and flooding, forced migration and droughts. A PNC bank report finds increasing delays due to ongoing protests at FERC, led by Beyond Extreme Energy as well as by affected communities, all add to the expense of development. The UN estimates that between two thirds and 80 percent of oil, gas and coal reserves currently on company books as proven reserves must be left “stranded” if climate agreements are kept. All of this has investors and corporations very nervous, especially since this comes at a time of increased expenses from extreme extraction as well as very low prices for oil and gas.

Extreme energy extraction and carbon more than about climate

Making all of this more challenging is that people opposed to carbon energy extraction and infrastructure are not only concerned about climate, but also about their cultures and communities. Indigenous peoples, who have been key leaders in this struggle, see their campaigns against carbon infrastructure as stopping the annihilation of their Indigenous rights and culture. This leads to deep issues that cannot be bought with money. For example, the Lax Kw’alaams Band, a Canadian First Nations people in British Columbia, turned down an offer amounting to $267,000 per person to allow a natural gas pipeline and processing facility to be built on their lands. And, Tsleil-Waututh Nation, this week announced the start of its lawsuit against the National Energy Board in Canadian federal court for failing to do their constitutional legal duty to adequately consult with the community when considering a Kinder-Morgan pipeline.

Last week, Vermonters filled the streets of their capital and conducted an overnight occupation to protest a fracked gas pipeline. In Utah, where a pristine part of the state is being destroyed by a massive tar sands excavation project that will also impact Wyoming and Colorado, people interrupted an oil shale conference sponsored by the state and showed that their opposition will not stop.

The focus of governments and businesses on growth at all costs is counterproductive. Under the current predatory capitalist system, a growing economy does not mean a shrinking wealth divide but an expanding one. To change this means in part being more precise in our economic assessments, e.g. measuring our happiness, reduction of poverty, access to healthcare, and distinguishing areas where there should be growth like the new energy economy from areas that must shrink, e.g. the wealth divide and dependence on carbon-nuclear energy.  Brent Blackwelder writes that the planet is not “in a liquidation sale” but rather needs to be treated as something sustainable for future generations.

Much of the public opposition to industry is coming from youth who recognize the seriousness of a climate-destroyed future and are taking bold actions. National actions are being organized on November 9. And on November 30, youth are organizing a global climate strike as the climate treaty talks begin in Paris.

All of this comes at a time when the industry is being exposed. Reports now show that Exxon knew that their product was likely causing climate change decades ago but hid the information, funded climate denialism and risked the future of the planet for profit. Bill McKibben has called this the greatest corporate crime in history. And, this has the company in such fear that it is going after journalists who reveal the company’s role in hiding the truth about climate change.

National consensus is being reached

Long-time activist George Lakey points out that when we realize most Americans actually agree with the movement on a wide range of issues, it gives us greater freedom to mobilize and organize.  This understanding also shows us how out-of-step government is with the people. For example, while a majority of Americans want climate change addressed, the Senate has appointed its leading climate denier to head the Senate committee on the environment.

This week a report from Pennsylvania found that the government failed to protect clean air and water during the fracking boom. They found regulators relied on the industry, did not enforce regulations and failed in their oversight. There is already a strong anti-fracking movement in Pennsylvania and reports like these will spur it to greater action.

The reality is hundreds of millions of Americans are on our side but the government ignores us. As a result, government is gradually losing its legitimacy and people power is growing.

People in Canada seem to understand this for while they were pleased to remove their Conservative Prime Minister, Stephen Harper, they know that the incoming Liberal Prime Minister, Justin Trudeau, also listens to big business interests. Canadians know they are going to need to build actions if any substantial progress is going to be made under Trudeau.

The key is to hold governments accountable because they are necessary to solve the climate crisis. Even Bill Gates recognizes that the government, not big business, will need to play a bigger role if we are going to solve the climate crisis. In a recent interview he points out that private enterprise cannot handle the climate problem and that it is government research on energy that is very cost-effective. He points out that countries like Germany and China are doing more than the United States. China, in fact, is rivaling Germany as the leading green energy economy.

For one of the richest capitalists in the world to make such views public will add to the budding national consensus on these issues. But at the same time, Gates has his problems and protesters are pushing him to do more by divesting from carbon energy and investing in clean energy.

Big energy is pushing through the back door what it is unable to get in through the front door of Congress. This week it was reported that TTIP negotiators are failing to ensure that the US—Europe trade agreement lives up to its promise of environmental protection. Leaks of the TPP show the same thing. For this and other reasons people are protesting throughout the world.

Join us in Washington, DC this November 14 to 18 to protest these corporate-rigged trade agreements. And, take action now by signing this petition to congressional leadership to say no to the TPP. We know that there cannot be any environmental justice without trade justice.

As noted above, people powered actions are slowing and stopping a great deal of carbon infrastructure but it is also notable that people’s movements are having an impact on electoral politics.The excitement surrounding the Bernie Sanders campaign is because his message is consistent with the movement for economic, racial and environmental justice. Without the popular movement changing the political climate, there would not be a Sanders campaign.

On the Republican side, the anger of the original Tea Party movement, which had in large part been co-opted by Republican operatives and funders, remains. Elected Republicans running for president are receiving very little support while outside insurgents are leading the pack.

Of course, we know that both parties are very good at stopping insurgents, but when they do, that will just lead to more anger among the people and de-legitimacy of government.

The popular movement for economic, racial and environmental justice should note its growing power and continue to build. We are having a major impact on keeping carbon in the ground and slowing carbon and nuclear infrastructure, as well as impacts on the economy and racial justice. Of course, the plutocratic corporate power is not giving up and we need to continue to build our strength, but our strength is growing. In the end people power will be the only thing that saves the planet.