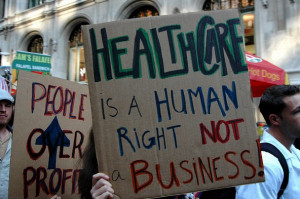 Newsletter – Positive Actions You Can Take This Summer

This week, we look at some of the current struggles in the United States and ways that you can get involved this summer.

This week, the Senate came out from behind closed doors to reveal the contents of their version of the American Health Care Act and were met with a firestorm of opposition. Dozens of disability rights activists protested loudly outside of Mitch McConnell’s door and had to be carried away by police.

The Senate legislation differs from the House bill in several ways: slower but harsher cuts to Medicaid; preventing insurers from excluding people on the basis of pre-existing conditions, but allowing states flexibility to drop coverage requirements; and smaller tax credits for the purchase of health insurance. Like the House version, the Senate bill cuts taxes on the wealthy, drops the mandate requiring people to buy insurance or pay a penalty and allows insurers to charge older people up to five times more for coverage. Pharmaceutical companies would receive an almost $3 billion per year tax break, even though they are already making high profits.

The GOP bill still has a way to go before it can become law. If three Republican Senators refuse to vote for it, then it will die in the Senate. If it does pass, the House and Senate versions will most likely have to be reconciled into a single bill and voted on again. Republicans are very divided on the bill, especially those who live in states that expanded Medicaid. A few Senators offered a telling proposal – to give Medicare to every person with a pre-existing condition so that private health insurers can continue to cover the healthy and satisfy their investor’s greed. 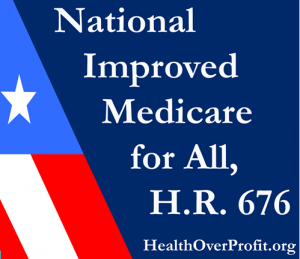 Throughout the din, the call for National Improved Medicare for All continues to rise. And it’s obviously having an impact because the Washington Post launched a smear campaign. Dr. Adam Gaffney responded with a dose of reality – Medicare for All is the best way to control healthcare costs and provide comprehensive health benefits to everyone.

Here are a few actions that you can take this summer to build the movement for National Improved Medicare for All:

1. Join the Health Over Profit for Everyone (HOPE) campaign.

2. Put a sign in your window showing you support for National Improved Medicare for All.

3. Participate in the Call to Action for Medicare’s birthday at the end of July.

Waves of Action for Net Neutrality 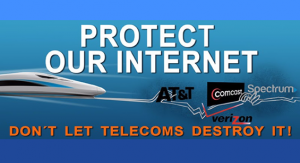 The new chair of the Federal Communications Commission (FCC), Ajit Pai, a Verizon lawyer, introduced a rule to undo net neutrality in May and the response has been huge. Almost five million people have submitted comments to the FCC so far, surpassing the four million comments in 2014. A recent poll by Politico, a corporate media outlet, shows majority support for protecting net neutrality among both Republicans and Democrats. It’s no wonder Netflix reversed their position and have come out in support of net neutrality.

A former head of the FCC, Michael Copps, explains why net neutrality touches on many fundamental issues from access to news to applying for a job to free speech and prisoner’s rights.

The current FCC comment period ends on July 17. Click here for easy step-by-step instructions on how to make a comment. And join the National Day of Action on July 12! Some groups are hosting online actions, but we want to reach beyond that. That’s why we are encouraging people to hand out information at their local train stations. Click here to learn why that’s relevant and how to get involved. 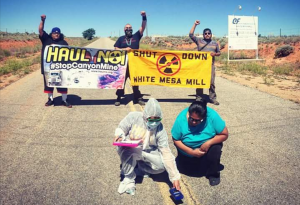 Taking it to the Streets and the Courts

Environmental and climate justice actions are happening at a frenzied pace. From uranium mining to fracking to pipelines and export terminals, people across the US are saying: “Keep it in the ground!” There is probably a climate justice campaign near you.

Marylanders succeeded in banning fracking this year, but continue to face threats from fracked gas. Dominion Energy is building a fracking refinery and export terminal in Southern Maryland at Cove Point. This is driving more fracking, pipelines and compressor stations in Maryland and surrounding states. This week, after actively petitioning him for the past year, Governor Hogan denied residents’ requests for a safety study for the facility. Fracking refineries can catch fire and explode. A normal buffer zone is two miles, but there is no buffer zone for this facility. There are almost 2,400 houses withing two miles. Click here to learn more and take action.

The fight to stop the Dakota Access Pipeline has moved into the courtroom. Lawyers are calling for a new review of the impacts of the pipeline in an open process that includes public participation. Supporters rallied outside the DC courthouse this week during one of the hearings.

With the current attempts by the Trump administration to remove many environmental protections, lawyers are busy challenging changes to federal regulations on many fronts. There is also concern that investment in new infrastructure will lead to projects that are built without consideration for their environmental impact.

The court room is also the site of a group of challenges to stop the use of Glyphosate, found in Monsanto’s RoundUp. It is having an impact. Fewer farmers are growing GMO products.

A fundamental key to changing the political system is changing the economy to reduce the wealth divide, meet people’s needs and empower people to be civically engaged.

Sam Pizzigati of TooMuch writes that CEOs can either make products or they can do as many have done, sell off manufacturing assets (and jobs) and cut wages and benefits to produce greater profits and stock values, thereby enriching themselves at the worker’s expense. Companies are also moving to greater automation when it comes to manufacturing, which is gutting middle skill jobs and pushing people into lower skill and lower paying service jobs. 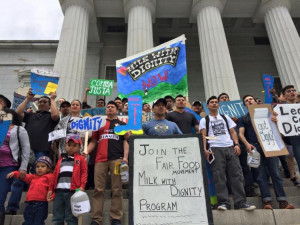 Workers are fighting back. In Vermont, hundreds marched on Ben and Jerry’s this week to pressure them to implement the Milk with Dignity program for the farm workers. In Rojava, the community has embraced a social economy based on cooperatives, creating jobs and preventing monopolies. A large part of Rojava’s economy is food production. The state of Maine took an interesting step recently when the governor signed a law allowing small food producers to sell their products directly to purchasers for home consumption or community events without regulatory oversight.

We can reduce the wealth divide and provide for everyone’s basic necessities. The problem is not having enough money to do it, the problem is not having access to the money. Recently, the city of Seattle and the state of Massachusetts introduced proposals to tax the rich. Seattle, the home of billionaires such as Bill Gates, is holding hearings in the city council on a wealth tax. Massachusetts will vote on a wealth tax in the 2018 election. 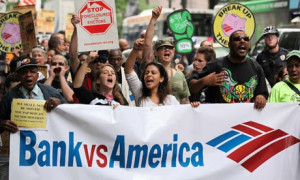 In the mean time, we can all pull our money out of the Wall Street banks and support our local credit unions and community banks instead. Read more about that here. You can learn more about the New Economy that prioritizes the needs of people and protection of the planet at It’s Our Economy.

Summer time is a great time to learn more about resistance efforts and work to build alternative systems that are transformative.