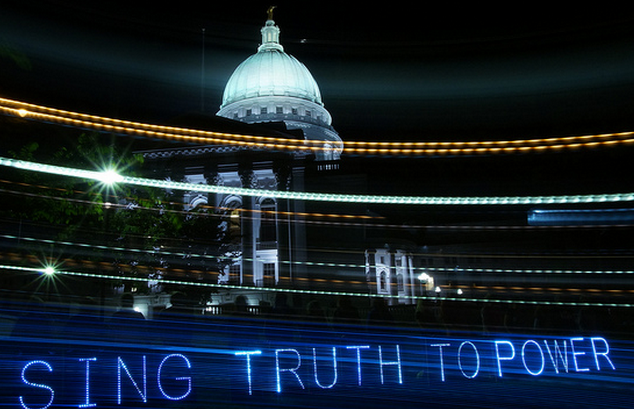 Newsletter: Praise For The Radicals

In his recent article, “The Dance of Liberals and Radicals”, the liberal Robert Kuttner writes, “No great social change in America has occurred without radicals, beginning with the struggle to end slavery. Causes that now seem mainstream began with radical, impolite and sometimes civil disobedient protest.”

We at Popular Resistance share the view that there need to be people and groups who see the bigger picture, who fight for what is not on the table and who are willing to put their bodies on the line to make change. Those are the people we try to lift up in our daily coverage of the movement because they are rarely recognized and are usually lacking in resources.

As US Militarism Rises, So Do The People

Yesterday we marched in Washington, DC for Spring Rising with our friends in the peace and Black Lives Matter movements. It was a beautiful first day of spring and we took the streets on our path from the White House, through China Town and then south to Capitol Hill. The Spring Rising, which lasted four days and included a “clean up” and exposure of Washington’s war crimes, is part of a full year of plans by the peace movement. See the calendar for more events. One action that needs your support is the Gaza Freedom Flotilla which is getting set to sail again.

With major conflicts being fomented in Asia and NATO surrounding Russia as well as ongoing violence in the Middle East, this is an important time for the peace movement, especially the radicals who have not been confused by our warrior president, to unite and stand up.

As we know, wars are based on lies and we need to see through them. A recently declassified document shows the lies told to justify the war on Iraq. Walden Bello of Foreign Policy in Focus exposes Washington’s role behind an intervention in the Philippines which jeopardizes peace negotiations there. And of course the commercial media is full of misinformation about Venezuela being used to escalate US pressure there. For more information on that, listen to our last episode of Clearing the FOG here and read here about how Latin America is rallying to fight US intervention.

In the US, resistance to drones continues with this creative protest at Fort Hancock where they blocked the base with giant books. And the ACLU filed a request for more information on whom the US is killing with drones.

As we’ve seen this past year, militarism is rising within the US too. Police commissioner Bratton requested 350 more police officers in New York City to fight ISIS. The city of Chicago had its own black site for torture, but now it has been exposed and civil suits are being filed. A police commander from one of the divisions involved in the site resigned.

Fighting Neoliberalism At Home And Abroad

Last week we wrote about the connection between these secret agreements and the “Global Redesign Initiative” to expand corporate power that comes out of the World Economic Forum. This article by Curtis Ellis, which cites Matt Stoller, is essential reading because it shows that the plan to reduce the power of nation-states and expand the power of multi-national corporations has been planned for decades.

This is a critical time to stop fast track legislation in Congress which will give presidents the power to sign these types of agreements and rush them through Congress for the next seven years. Our work to stop fast track is having an effect. This past week, the trade ambassador Michael Froman met behind closed doors with House Democrats. Lawmakers were warned ahead of time that if they talked about what they were told, they would be prosecuted for revealing state secrets. A few House Democrats spoke out after the meeting and said that Froman was trying to “baffle” them “with bullshit.”

We continue to put pressure on Senator Ron Wyden to prevent him from co-sponsoring fast track legislation with Orrin Hatch. On Thursday we “flooded” Congress with the message that fast track silences democracy and our rights. We ended up at Wyden’s office to deliver hand-written letters. Wyden prides himself on supporting transparency, so we want to know how he could support a fast track bill that maintains secrecy. You can call his office and ask the same question at 202 224 5244.

Each week we are holding National Fast Track Resistance calls to educate about the TPP and fast track and teach tactics that are being used to fight them. Our next call will feature Anne Petermann talking about the impacts of the TPP on the environment and climate crisis. Click here for more information and to register. There will be a national week of action April 1 to 8 and an international day of action on April 18. We’ve created a Rapid Response Team to respond as necessary in Washington, DC. If you are able to join us, contact Mackenzie@popularresistance.org.

In addition to the treaties, other neoliberal institutions are also being challenged. Last week there was a protest at the World Bank in Washington, DC over gold mines in El Salvador. Civil society groups joined to expose the World Bank for promoting land grabs and inducing poverty. In Frankfurt, more than 10,000 held a ‘Blockupy’ at the opening of the new headquarters of the European Central Bank. A large coalition protested the bank’s role in causing poverty.

In New York City, protesters went straight to the doors of one hedge fund mogul’s home because of undue influence over public policies that are causing increased inequality. This came as news broke that Wall Street bonuses are exceeding profits which places the financial system at risk of collapse. One bank is currently on trial for deceiving investors about toxic mortgage assets in what is being called ‘the trial of the century’. Its outcome will shape future bank behavior.

Although there is still much to do, we want to highlight some recent victories.

The six-week long strike by 7,000 workers at 15 oil and gas plants is coming to a close as the United steel Workers reach an agreement with Shell Oil. One of the main concerns was worker safety and staffing at the plants, which also affects local communities in the event of a fire or explosion. Workers are also concerned that they be protected as we move off fossil fuels and to renewable energy.

In an interesting move, the United Nations Framework Convention on Climate Change (UNFCCC) gave moral backing to fossil fuel divestment. As divestment occurs it will be essential that the public push for investment in real solutions, not the misnamed ‘clean coal’ or ‘natural gas’ but in actual renewable sources of energy.

An unexpected victory happened for the We are Seneca Lake campaign. More than 200 people have been arrested trying to stop construction of a fracked gas storage facility in an old salt cavern. Some have served jail sentences for trespass. This week the judge dismissed 42 cases and he will dismiss 100 more ‘in the interest of justice’.

We learn lessons from our victories, and also from our defeats. There is much to be learned from the recent loss in Wisconsin, which now joins 24 other states as a deceptively-names ‘Right to Work’ state.  Labor Fight Back outlines some of the reasons behind the defeat in the hope that Labor will meet to develop a more effective strategy to protect workers.  One particular point was starting from a position of compromise.

And that brings us back to the theme of this week’s newsletter. It is the practice of our opponents to weaken movements by dividing them, separating the ‘pragmatists’ from the ‘radicals’ and making the radicals seem like a ‘fringe’ element. It is our hope that progressives will resist that effort to divide and realize that radicals are essential to the success of movements and we need solidarity to achieve success.

So we call on people to embrace the radicals – those who recognize the root causes of our crises, who fight for real solutions and who put themselves on the line in acts of civil resistance. And we end with a quote from Dr. King:

“Human salvation lies in the hands of the creatively maladjusted.”

In fact, a few days after the Bloody Sunday march in Selma, President Lyndon Johnson gave perhaps the greatest speech of his career, and it was rooted in the radical actions of Dr. King and the civil rights movement. who were often labled agitators, radicals and Communists. He was introducing a bill to assure voting rights to all Americans. This was something resisted by the Democratic Party because it had a strong segregationist wing and relied on southern voters to win national elections.  Johnson, speaking to 70 million people watching, gave credit to the movement, saying:

“The real hero of this struggle is the American Negro. His actions and protests, his courage to risk safety and even to risk his life, have awakened the conscience of this nation. His demonstrations have been designed to call attention to injustice, designed to provoke change, designed to stir reform. He has called upon us to make good the promise of America.”

It is rare for the radicals to get credit, especially from a president, but it is not credit we seek. We seek a transformation to a more just world and it our job to be uncompromising in that quest. Johnson concluded his speech linking with the Civil Rights Movement saying, “And we shall overcome.” We know that even as difficult as the challenges we face today are that solidarity among those who want a better world will overcome those challenges once again.

Popular Resistance depends on your generosity.  Please click here to support our work.