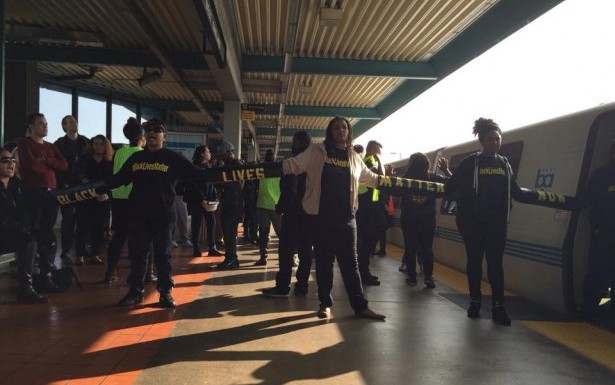 Newsletter: Respect Our Human Rights Or We’ll ‘Shut It Down’

This week we marked the 66th anniversary of the Universal Declaration of Human Rights which was signed by the United States at its inception but has never been ratified. Perhaps because we live in a country that does not protect our human rights, many people in the US lack an understanding that they exist.

In the work for justice, important tasks are to learn about our rights, recognize that they are being violated and to stand up with the demand that these rights are honored. Throughout history it has been organized people-power that has won rights. We cannot expect to gain them any other way.

We’ll highlight many areas where people are fighting for rights.

The right to not be tortured

The Senate Committee on Intelligence finally released its report on the CIA torture program this week. The report demonstrates that the CIA used severe methods of torture, sometimes causing death, and that torture is not an effective way to gain information. Though torture is illegal, President Obama has already said that he won’t pursue an investigation or prosecution of those involved. So far the only person to go to jail over the CIA torture program is John Kiriakou, the official who blew the whistle on it.

For the Green Shadow Cabinet, shadow attorney general Kevin Zeese argues that Obama is violating the law by not prosecuting and urges as a first step he immediately pardon Kiriakou.  The ACLU has laid out a “Blueprint for Accountability” and UN Special Rapporteur Ben Emmerson is calling for prosecution of those involved even at the highest levels of office. Glenn Greenwald’s recent piece on the release of six more detainees from Guantanamo describes the severity of their treatment and the Justice Department’s efforts to hide the truth. It will take public pressure to bring justice.

The right to equal treatment under the law

More information is coming out about racism and excessive use of force by police in the US. The Department of Justice concluded a 20-month long investigation of Cleveland’s police department which revealed disturbing patterns similar to those found in a number of cities that have been investigated. A former officer with the St. Louis PD wrote about his experiences, saying that the whole system needs to change and “The number of people in uniform who will knowingly and maliciously violate your human rights is huge.”

It is this systemic racism and violence and the militarization of police that communities are fighting. The protests continue to be sustained and are drawing in new groups such as athletes, medical and other health profession students and congressional staffers. High school students in Manhattan defied a ban and walked out of school to march to the federal courthouse in Brooklyn.

In response to the ongoing protests, the President has appointed a commission on police reform. However, Professor Steve Kraska who advised the White House believes the commission will actually make the situation worse.

Today is a national day of marches called the “Wave of Indignation.” And every Monday, the Hands Up DC Coalition will be at the Department of Justice in Washington, DC for Justice Mondays at 4:00 pm. Read their demands. You can join them in solidarity by protesting every Monday at Federal courthouses or US Attorney’s offices.

The right to climate justice

The UN’s COP20 climate talks in Lima, Peru wrapped up this week.  On Human Rights Day, climate justice activists rallied outside the UN in New York to bring attention to the talks and to call for climate justice as a human right. The same day, thousands marched in Lima to demand an end to abusing the Earth’s resources and a move to 100% renewable energy.

The UN COP process has largely failed to address the climate crisis, with the US being a primary obstacle to real solutions, and has become another tool for market-based false solutions.  Real work on climate justice is coming from communities around the world. In the US, people are resisting the expansion of fossil fuel infrastructure and are winning. Protests in MA have forced Kinder Morgan to change its pipeline plans and people in NH are joining the fight to stop the pipeline. Today begins a coordinated multi-state week of direct action to fight approval of the KM pipeline by the FERC.

A broad coalition in Nevada is fighting fracking there. And the “We are Seneca Lake” blockades continue to be strong in their sixth week.

Protests and the reality of climate change are causing mega-banks like the Bank of London to rethink investing in fossil fuels, fearing that they will become ‘stranded assets’ if they are forced to be left in the ground. On the other hand, Big Oil’s cozy relationship with Attorney Generals was exposed this week by the New York Times. “The Times reported previously how individual attorneys general have shut down investigations, changed policies or agreed to more corporate-friendly settlement terms after intervention by lobbyists and lawyers, many of whom are also campaign benefactors.”

Extraction of fossil fuels causes other human rights abuses too. Native Americans in Black Mesa, AZ are fighting with Peabody Coal over a million artifacts including the bones of 200 ancestors that have been dug up and housed in ‘substandard conditions’ during mining. Other land defenders in AZ are preparing to fight the US government’s move to give thousands of acres of sacred land to the foreign mining company, Rio Tinto, and they ask that everyone flood the White House with calls.

Fighting for our basic rights

There are a multitude of struggles based on human and civil rights in the US.

There are some victories. Workers in San Francisco fought for and won a “Workers Bill of Rights.” Illinois is the third state to call for an amendment convention for fair elections. And the sale of the Berkeley Post Office, an important part of our public commons, has fallen through and activists continue to occupy it.

We are facing a financial and political system that has little regard for human rights. In fact, a new report shows that only half of global banks have a policy to respect human rights, even though they have a mandate to do so, and none have a process to address human rights abuses that are reported.

The Trans-Pacific Partnership, which is being pushed by President Obama, will give greater rights to multinational corporations and will challenge our rights to protect our health, safety and the planet. Protesters greeted the trade negotiators this week with a demand for our right to see the text of the TPP to be respected.

As Kate Aronoff suggests, the Occupy Movement which focused on occupying public space to influence the public dialogue has grown into the Shut It Down Movement that insists on changes. In our dysfunctional political system, it is up to us to protect our communities and our planet. We must demand our human rights for a peaceful, just and sustainable future. And if we don’t get it, shut it down!