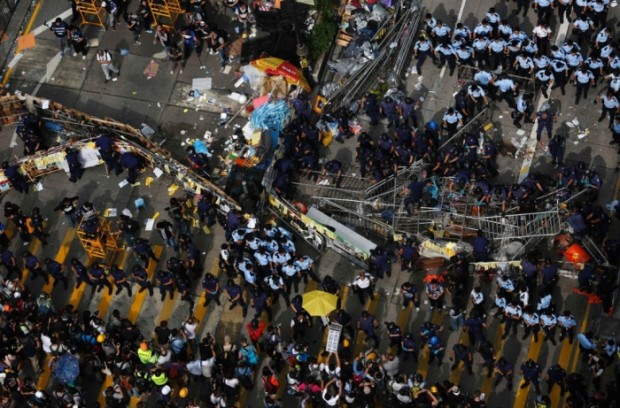 Newsletter: See You At The Barricades

We are at a crossroads to either a future of global corporate governance or a chance for democracy. As Chris Hedges writes in his new book, “Wages of Rebellion: The Moral Imperative of Revolt,” a revolution is coming but we can’t guarantee which way it will go. Will you be there to fight for justice? You have an opportunity to do that now.

This is the critical week to stop Fast Track legislation from passing in Congress. Fast Track could last for the next six years and would enable passage of not just the Trans-Pacific Partnership (TPP), but also the Trans-Atlantic Trade and Investment Partnership (TTIP) and the Trade in Services Agreement (TISA).

TPP and TTIP are bad, TISA is the worst!

We thought that the TPP and TTIP, which would outsource jobs and depress wages, threaten food safety and access to health care, poison the environment and worsen the climate crisis and attack local democracy, were bad enough, but a leak of the TISA by Wikileaks show that it is even worse. TISA will push all public services to be permanently privatized and will give corporations greater power to write our laws. TISA further deregulates the financial industry which sets us up for more economic instability and removes our power to control the banks when the next crash arrives. Public services like the postal service are at risk for being privatized. And, if you want municipal or public control of broadband to get on the Internet, TISA will make it impossible.

Wikileaks announced a reward for leak of the TPP text.  We joined the AFL CIO in their action to demand that the USTR release the text, but the only response by the USTR was to lock the doors and call the police. Sign this petition to demand the text be released.  Meanwhile, a release of emails between the trade office and industry shows how closely they worked together on the text.

The United Nations came out with a formal statement of concerns about human rights violations if the TPP and TTIP are signed into law. For example, the TPP rewards countries that use slave labor and reduces human trafficking and child labor crimes to misdemeanors. Obama is upset about attempts to ban countries that are involved in human trafficking from the TPP. This is just one of many areas that reveal Obama’s hypocrisy between what he says and what he does. The UN urged all drafts should be made public so their can be debate and discussion about them.

Obama is working hard to get Fast Track so that these international agreements can be rushed through Congress without review. That’s why we must stop Fast track!

The Senate passed Fast Track and the House may vote on it as early as this Thursday unless we mobilize to stop it. We started the Rigged Trade Rebellion on Capitol Hill last Thursday and we will be back when Congress returns on Tuesday morning.

This past week when the G7 global elites met in a castle in Germany, tens of thousands from this relatively small country turned out to protest. Where is our outrage? Will you join the Rigged Trade Rebellion this week and stop Congress from passing Fast Track? Our future depends on it.

Fighting for our future

There are powerful fights going on across the nation and people who are saying “no more!” In Denton, TX, after the court struck down the fracking ban, the people have not backed down. They are using civil resistance and pressure on the city council to halt fracking.

Recently, organic farmers in Oregon had a huge win when the court ruled in their favor and against conventional farmers who challenged the GMO ban. Persistence is critical, as Renew Missouri teaches us in their work to move the state off coal and onto more solar energy.

Florida resident Robin Speronis has an even bigger fight on her hands – the court ruled that it is illegal to live off-grid, she is appealing.

And Calvert County residents are learning what it is like to live in a corporate police state. After a successful 200-person march last Saturday in opposition to Dominion’s dangerous fracked gas refinery and export plant, the first to be built in a residential area, visitors attempted to walk on the beach the next morning but were stopped by police acting as Dominion security. The police took more than an hour and illegal searches to find something to justify an arrest; they found a bottle with a few tablets of prescription legal medicine in it and called it a drug bust even though the young woman arrested offered to have her boyfriend send a photo of the prescription and to call let police call her pharmacist. Now she is facing 8 years in prison.

There were good and bad news this week – the EPA finally released a study showing the impacts of fracking on water and the Department of the Interior was forced to reveal the extent of fracking going on in the Gulf of Mexico. At the same time, the Obama administration approved coal mining in Wyoming that will release a carbon bomb bigger than the Alberta Tar Sands.

This is outrageous in a time when we desperately need to stop investing in more fossil fuel infrastructure and move to a clean and sustainable energy future. This excellent article by Harsha Walia explains why an Indigenous-Labor alliance is critical to winning this one. Walia writes, “The possibilities are endless and the power within such genuine acts of solidarity and reconciliation are transformative.”

With or without such an alliance, the Penobscots and Passamaquoddy are asserting their sovereignty and rights to self-determination by breaking diplomatic ties with the state of Maine over a recent power grab by Governor LePage.

After allowing the Patriot Act to sunset last Sunday, the Senate quickly moved to pass the so-called USA Freedom Act on Tuesday. The reality is that even without the sections of the Patriot Act that expired, the government still had plenty of authority to spy on us. But now the so-called Freedom Act reauthorizes such spying and has NSA and the telecoms working together to keep track of data of US communications.

Defending Dissent/The Bill of Rights Defense Committee breaks the Freedom Act down for us and calls for a ‘new Church Committee’ to investigate the legality of domestic surveillance. The EFF views the Freedom Act as a small step and urges us to keep fighting to end the surveillance state. Oakland is the first city to take significant steps towards controlling surveillance.

Going hand in hand with domestic surveillance is the militarization of police and the advent of military exercises in our cities. Families in Flint, MI were surprised by military exercises that included simulated bombs in their community with very little warning. Many states will be subjected to the same starting in July under operation Jade Helm.

One advocate of the security state, Mass Arrest O’Malley announced his run for President last weekend amidst protests of his “broken windows” policing, mass arrest without probable cause policies that jailed one sixth of the city’s population and heavy investment in security apparatus in Maryland. Many Baltimore residents can imagine O’Malley with the power of commander-in-chief after he abused his police power as mayor.

Dr. Cesar Chelala raises important questions about militarization and the definition of intervention including when a country has violated its responsibility to protect its citizens’ rights. There are different ways to define security. Some would say that security means a police or military force to protect people from those who might cause harm. Others would say that security means the government has a responsibility to make sure that the basic needs of its people are met which in itself would reduce crimes and the need for a violent security force.

This is your food for thought for this week. How do you define security?

See you at the barricades!