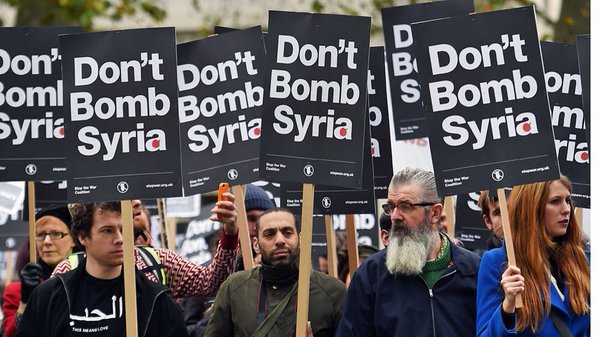 The US attack on Syria, in reaction to the unproven allegations that President Assad used chemical weapons on the Syrian people, was not a surprise. It took President Trump a few days of discussions with his military advisers to decide to use the tactic of bombing a military target with 59 Tomahawk Cruise Missiles. The Russians were given advance warning, personnel and some equipment were removed from the site and because a majority of Tomahawks missed their target, very little damage was done to the site. There are reports of Syrian aircraft flying out of the facility after the bombing. But damage was done to cities nearby the site and at least 25 civilians were killed, including 8 children, and dozens were injured.

Donald Trump’s claim that he was moved by the deaths of civilians especially children does not have much credibility. Stephen Zunes writes: “Since Trump came to office, nearly 1,000 civilians have been killed by U.S. air strikes in Syria and Iraq—including up to 200 civilians in Mosul and around 60 civilians in the bombing of a mosque in al-Jena (not far from the site of the chemical weapons attack) this past month.”

This was an illegal act of war under international law. The US did not meet the requirements for a legal military attack: (1) it was not being threatened by Syria and (2) the UN Security Council had not approved a US attack. At this point we know the chemical weapons event occurred, but we do not know whether it was done by Assad or whether it was the result of Russia bombing an arms depot, as has been claimed. No matter what the cause, it does not justify a US military attack on Syria. In fact, the US has been illegally bombing Syria since 2014, conducting more than 8,000 air strikes with thousands of casualties.

There are very high risks with this military escalation. Secretary of State Tillerson has reversed course on Assad and says he needs to be removed. This means that regime change is now on the agenda for the Trump administration, which goes against his stance just a week ago. It is unclear how Putin and Assad will respond and whether the Trump administration will treat this as a one-time strike, which seems to be the case, or whether it will become a campaign against Assad. That would put us at risk for another long Middle East quagmire, conflict with Russia, and even a possible nuclear war, as Rep. Tulsi Gabbard warned.

As we pointed out in a recent newsletter, war is one of the possible events that could also take the movements for economic, racial and environmental justice off track and be used to justify giving greater security powers to the President as well as a crackdown on dissent. We can prevent that from happening.

How Should The Movement Respond?

The Hands Off Syria coalition (Popular Resistance is a member) reports protests being held in 52 cities across the US on Friday calling for no war with Syria and an end to the bombing.

This is a good initial response but it needs to be part of a campaign of education and actions in the US to end the brutal war in Syria, get the US and all foreign powers out of the country and hold internationally monitored elections. The leadership of Syria must be determined by the Syrians as they demanded during the Arab Spring democracy uprising. The US, which has sought regime change in Syria since 2003, should not decide the leadership of a sovereign nation.

Syrian peace talks have been taking place and more are scheduled, but the missile attack may be used as a reason to cancel them. Our message needs to be in strong support of peace talks. We must demand that the missile strike become a prelude to peace rather than a path to a war quagmire.

An initial reaction in the US is that the missile attack has ruined the opportunity for détente with Russia, something Trump said he sought throughout his campaign. But, another view is that the missile attack has given Trump greater credibility with the anti-Russia war hawks in Washington, DC. He has shown that he is willing to use the US military even if Russia opposes it. Larry Wilkerson, former aid to Colin Powell says the attack was done for domestic policy reasons — low polls, Russia-Trump investigations. The attack gives Trump greater flexibility to talk with Russia without being accused of being Putin’s puppet.

The high risk of a costly quagmire in Syria and escalation with Russia give more reasons for Trump and Putin to find a positive path. Secretary of State Rex Tillerson will travel to Moscow next Wednesday to meet with Russia’s foreign minister, Sergey Lavrov. The strike has given this meeting greater importance. The peace movement should push for de-escalation in Syria as a first step toward a productive US-Russia relationship.

The movement must also push for refugee justice. The Syrian people have suffered immensely over the last six years. The current death count is 207,000, including 24,000 children and 23,000 women. The refugee crisis, with over five million people fleeing the nation and more than six million more forced to leave their homes, is immense. Over 50 percent of the Syrian population is in need of aid. A focus of our advocacy must be on behalf of the Syrian people. This is a time for the Trump administration to reconsider its ban on Syrian refugees, which has been blocked by the courts.

And a larger goal is to deeply educate the people of the United States about the reality of US Empire and how it relates to our struggles. The US is not the good cop of the world, rather it is as Rev. Dr. Martin Luther King, Jr. described “the greatest purveyor of violence in the world today.” The US is the largest Empire in world history and that comes with great costs to the federal budget, which is dominated by the bloated military and intelligence agencies. Our Empire economy serves transnational corporations, not the people in the US or workers around the world. This week, the #No54BillionForWar campaign was launched on the anniversary of the assassination of Dr. King calling for our dollars to be spent on human needs such as education and health care.

Finally, the strong movements that are growing in the US to create racially-just policies, sanctuary for immigrants, living wages for workers, a clean energy economy and national improved Medicare for all must continue. We cannot be thrown off track and allow this misdirection from Washington, DC to be allowed. Yes, our plates our full but the movement continues to need to build and the movement against war can be synergistic in making us stronger. For example, the Black Alliance for Peace was also launched this week. Co-founder Ajamu Baraka says that it will “concentrate its efforts on opposing both the U.S. global military agenda as well as the war and repression being waged on black and brown communities domestically.”

Exposing the US war culture and changing the conversation

Another task is to open the political dialogue to include dissent on war and militarism. As can be seen in the media and among the bi-partisans in Washington DC, there is little room for dissent. As Fairness and Accuracy in Reporting (FAIR) highlighted, the five top papers in the United States ran 18 opinion pieces, and all 18 were in favor of the military attack.

FAIR also reported how television pundits were unanimous in their positive reporting on the bombing. Fareed Zakaria, stealing from Van Jones, claimed “Trump became president of the United States” from the bombing and criticized the idea that a “pesky” Congress needs to be included. Brian Williams of MSNBC may have been the most starstruck, gushing over the missile attack and describing them as “beautiful” three times in 22 seconds as this video shows. No one mentioned that the US’ missile attack was illegal under international law.

The movement has a lot of work to do to overcome the war culture in the media and in DC politics where almost everyone supported the attack including, Nancy Pelosi, Chuck Shumer, Paul Ryan, Mitch McConnell, John Kerry, Hillary Clinton, John McCain, Lindsay Graham . . . There was applause all around from the bi-partisan war hawks. Only Sen. Rand Paul and Sen. Mike Lee on the Republican side and a handful of progressive Democrats criticized the attack. Most of those who criticized it did not question the veracity of the claims that Assad was responsible, they merely called for better procedure, i.e. include Congress.

The intelligence community and military need to be held to account. They claimed Assad did it without any proof and no doubt led the media and politicians to this unproved conclusion. There were many who criticized this conclusion but one of the more persuasive people was, Colonel W. Patrick Lang, a retired senior officer of U.S. Military Intelligence and U.S. Army Special Forces, and an Arab speaking specialist on the Middle East who was the Defense Intelligence Officer for the Middle East, South Asia and Terrorism. Col. Lang  wrote, “Donald Trump’s decision to launch cruise missile strikes on a Syrian Air Force Base was based on a lie. In the coming days the American people will learn that the Intelligence Community knew that Syria did not drop a military chemical weapon on innocent civilians in Idlib.” This may be another war started with a big lie, a sad US tradition.

A driving factor behind the lies is money. Each Tomahawk missile costs $1 million, not counting the personnel and ships required to shoot them. Reuters business noted that Raytheon’s stock was going up as the attack progressed. And Market Watch reported that the price of oil is expected to rise now that the “risk premium” is back. The banks will be pleased that the US will go into debt for this expensive attack, which could be a first step in an even more expensive war quagmire.

Our job is to make mistakes like this lead to transformation

Military and policy mistakes like this should lead to radical transformation. The system will not bring about the change that is needed, but this incident provides us with the tools we need to show reality and highlight the falsehoods.

We must lift the fog of war before it gets too thick. It is an opportunity we need to take advantage of to prevent more casualties of war in the future.

If we get the truth out, organize in our communities and connect our issues to war, this could become a mistake that helps to end the destructive US Empire.