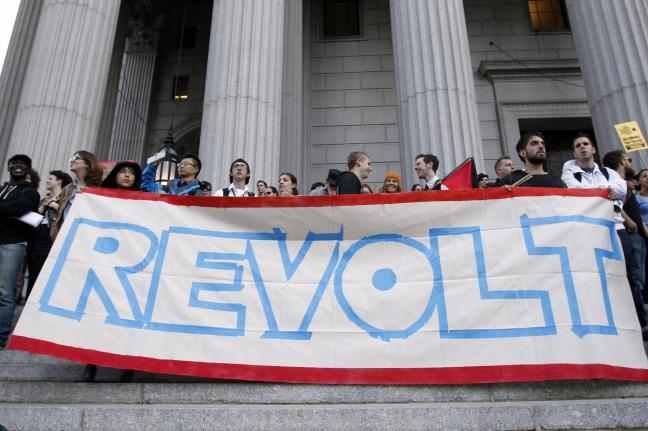 Newsletter – The Consent Of The Governed 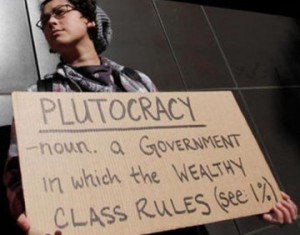 We have argued for a long time that current governments at all levels – local, state and federal -function primarily to benefit the wealthy. Academics have proven that the United States is a plutocracy – rule of, by and for the wealthy. Of course, the current economic system is designed by and for the plutocracy by two big business-funded parties. The neo-liberal policies of the Democrats and Republicans have driven decreased funding for public necessities such as education, housing and health care and increased privatization of anything that can be made into a commodity.

We live in a mirage democracy, which was exposed to many people this past election season but has existed for a long time. Candidates are chosen by the major party machines fueled by Wall Street money so that voters are left to choose between one ‘evil’ or the other and fight over which one is the ‘greater evil’. Voter turnout is low because many people realize this reality.

It is time for us to withdraw our consent. Let’s consider how to do that and what protections will be needed. When a government loses the consent of the people, the only ways it can keep its grip on power is through repression and force.

The Untold Story of Nonviolent Revolution in the United States

The Euro-centric teaching of history in the US tells us that our independence from the British came as a result of war, but the reality is that nonviolent resistance created the conditions for independence for over ten years prior to the war. Benjamin Naimark-Rowse writes that colonists used nonviolent campaigns such as refusing to import goods from or pay taxes to the British, developed local economies to meet their needs and practiced self-governance. He explains, “In defiance of the British, colonists organized the First Continental Congress. Not only did they articulate their grievances against the British, colonists also created provincial congresses to enforce the rights they declared unto themselves.” They withdrew their consent by creating their own economy and boycotting the British economy; and by creating their own government and assemblies to rule themselves. 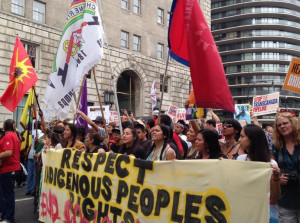 We must acknowledge that the US was founded on the genocide of Native Peoples, including the theft of land, food and other resources, and the enslavement of Africans and others. Gerald Horne writes that the colonizer’s revolt against the British was largely to prevent the abolition of slavery, which was happening in Britain because of a court ruling that there was no legal basis for slavery under British law. This history cannot be ignored and neither can the ongoing nonviolent resistance of Indigenous peoples who continue to experience violations of treaty rights and exploitation of their land, even of their sacred sites, and poisoning of their communities to extract minerals and sources of energy.  The history of slavery in the US is also a story of persistent struggle. Biased systemic policies have stolen the wealth and futures of people of color since the beginning and continues today, as can be seen in discrepancies in wealth, income, access to education, incarceration and other measures.

We must know and understand this history because the oligarchs have won by creating division within their opposition to weaken it. We will have unstoppable power when we recognize that all of our struggles are connected and we work together in resistance and the creation of new systems that end oppression.

Kali Akuno, from Cooperation Jackson and the Malcolm X Grassroots Organizing Movement, is calling for “a program of noncompliance and noncooperation on both the federal and state levels.” In particular, this means that civil servants are being asked not to comply with rules that are discriminatory and it also means organizing mass actions of civil resistance such as boycotts and strikes. Another critical need is to build alternative institutions that meet our needs and are run democratically. These include land trusts, cooperatives, local food networks, alternative currencies and time banks. Cooperation Jackson is preparing to open three cooperatives. We’ll interview Akuno on Clearing the FOG January 9 at 11 am Eastern about their plans. Learn more at the Ungovernable website. 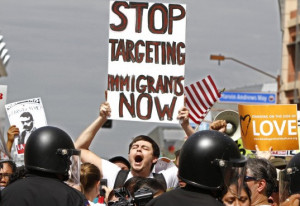 Public banks provide protection to cities that may face cuts in federal funds if they resist harmful policies. For example, around 130 cities across the US have proclaimed themselves as sanctuary cities that will protect immigrants from federal efforts to deport them even though the cities will be threatened with cuts in funds under the Trump administration for doing so. Public banks function by keeping public dollars local where they earn money that can be used for projects rather than paying high fees to Wall Street banks. This will help to offset losses caused by retaliatory cuts.

Many immigrant communities in the Southern United States have faced discriminatory laws, raids and deportations for years. They are organizing in their neighborhoods to work together through ‘people’s committees’ and to report incidents when they happen so they can protect each other.

In Venezuela, people’s committees are organized into local democratically-run councils that provide a governance structure. Through the councils, communities work out problems and do projects together. Councils join together to form communes which are further organized into a communal parliament. Venezuela’s communal movement is working to replace the government through a bottom-up approach.

Self-governance is also seen in Rojava in Syrian Kurdistan. They are emerging out of the crisis in capitalism, forming cooperatives and self-governing through assemblies. Rojava is “a liberated area in the Middle East led by kickass socialist-feminists, where people make decisions through local councils and women hold 40 percent of leadership positions at all levels.” It is a model we can all learn from.  They are building democracy without the state.

Another example is the liberated area in Mexico created by the Zapatistas as NAFTA came into power. Their solution is “Food Sovereignty, Decolonization & Equity.” They decolonized their educational system and teach their own communities. When it comes to elections, the Zapatistas believe “no one will solve their problems for them, but that instead we have to solve them ourselves, as organized collectives.” Although they have recently announced that they will create an Indigenous Governing Council and run an indigenous woman for president of Mexico in 2018.

Another area of oppression that we need to counter is the crackdown on independent media. The renewed National Defense Authorization Act (NDAA) that was recently signed into law by Obama contains a provision for the creation of a new bureaucracy which will have the power “to shut down information that doesn’t conform to U.S. propaganda narratives.” One-third of the recent intelligence report on Russia influencing US elections was focused on their television station, RT America. Some of the evidence of their influence: RT allowed third party presidential debates to be held on the air in 2012! We wonder if CNN, FOX or MSNBC had held such debates if they would be considered treasonous? Debates strengthen US democracy, not undermine it. Access to accurate information is critical as we organize to resist harmful policies. We know the commercial media are propaganda arms of the state. We will need to protect our independent sources of information, and internet freedom, as they come under attack.

Time to be Bold 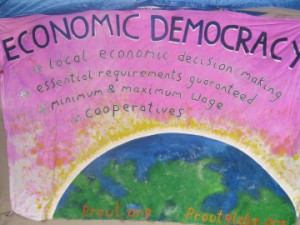 We are called at the present time to be bold in our organizing and actions. We can resist the continuation of neo-liberal policies that are funneling money to the already wealthy while robbing us of access to basic necessities such as living wages, education, health care and more. We need to resist policies that increase our economic insecurity and place our communities at risk by joining together at the local level,  building positive alternatives and maintaining communication through state, national and international networks.

If you don’t already belong to a group in your community that is organizing, then a simple step is to reach out to friends or neighbors to start talking about what you will do to protect each other. How will you make sure that everyone in your neighborhood has access to food, heat and medical care? Will you document and report events if you see violence against members of your community or deportation raids? Will you have a communication network? And what can you do locally to gain communal control of land, jobs, food and public assets to make sure they serve the public good?

We have entered a new era, a presidency of protest and an increasingly illegitimate government. We have the power to withdraw our consent from hate and exploitation and build love and prosperity.

Here are some opportunities:

Send a letter to the editor of your local paper to spread the word about the People’s Agenda by using our new tool. Click here to get started.

Join us in Washington, DC for actions during the inauguration. We are organizing a trade justice action on January 20. Click here for more information.

And we will join Beyond Extreme Energy for a protest at the Federal Energy Regulatory Commission on the morning of January 19. Click here for details.