Newsletter: The Inauguration Of Protest

Above: From January 21, 2017 Women’s March on Washington. Trump was resisted from Day 1. By Mike Coppola for Getty Images.

The last few days have seen a series of mass protests against President Trump and his incoming administration.  This should be the inauguration of persistent protests, not just against the Trump administration but also the system that has consistently put in place governments that represent big business interests and militarism while most people in the US face economic insecurity, and people around the world face US bombings. President Obama broke George W. Bush’s record for bombs deployed creating further hatred for the United States, insecurity and chaos. Trump is a symptom of a failed political system that does not represent the interests of the people or planet. 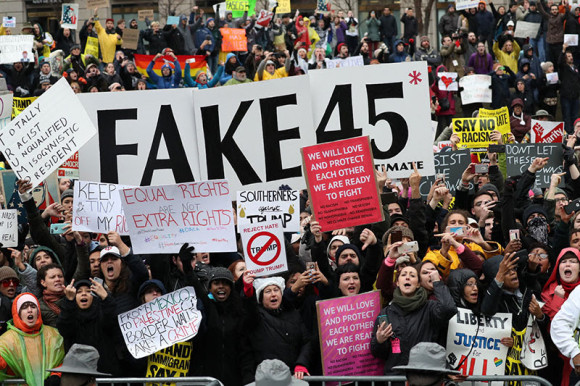 Protests were varied from Black Bloc to the massive Women’s March; it included blockades of entrances to the inaugural parade, people singing at the entrances to the parade and people urging a wide range of progressive policies, all of which were brought together by a mass march and a Festival of Protest.

Protests Before, During and After the Inauguration

On Wednesday night, the street outside Michael Pence’s home became the venue for a Queer Dance Party. The gathering was organized by Werk for Peace, which describes itself as a “grassroots movement using dance to promote peace,” participants were chanting, “Daddy Pence, come dance.”

On the day before the Inauguration, there was a protest and sit-in at the Federal Energy Regulatory Commission (FERC), the federal agency that approves carbon energy infrastructure and is funded by the oil and gas industry, rather than tax dollars.  FERC decided to close their “public” meeting to the public in fear of the protests. Beyond Extreme Energy is now re-defining the agency as “Trump’s FERC.” 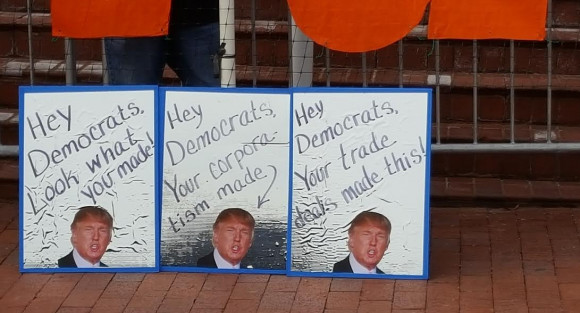 The day before the Inauguration there was also a protest outside of the Democratic National Committee highlighting the reality that the Democrat’s neoliberal and militarist policies created the political environment that allowed Trump to flourish. The protest featured a massive BETRAYAL sign in front of the DNC as well as mirrors urging the Democrats to reflect upon what they created. The mirrors included a picture of Trump with text saying that the Democrat’s wealth-divide, dirty energy policy, ObamaCare and more gave us Trump. The night before the Inauguration, more than a thousand people protested outside of the ‘DeploraBall’, a celebration by white supremacist supporters of Donald Trump. Protesters had conflicts with attendees as they entered the DeploraBall; and had conflicts with the police as smoke bombs were used by protesters and tear gas was used by the police.  Protesters chanted and carried signs against racism and fascism and lit fires in the street. 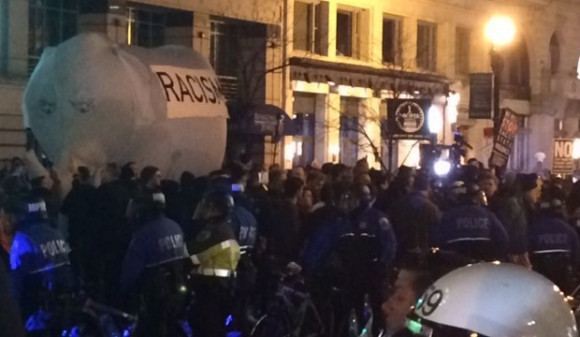 Elephant at DeploraBall by Photo by Judy Kurtz for the Hill.

Throughout the day there was a concert and rally held to stop nuclear weapons at Franklin Square Park. The rally organized by the Poor People’s Economic and Human Rights Campaign comes after Obama has been escalating the nuclear arms race with his missile shield deployment on the Europe-Russia border and his 30 year plan to update the US nuclear weapons arsenal; and when Trump escalated the nuclear weapons race with a tweet calling for more nuclear weapons. The morning of the Inauguration, Black Bloc protesters marched through the streets of DC, breaking windows of stores, turning over newspaper dispensers and destroying a limousine. Police responded aggressively with tear gas, pepper spray, flash-bang grenades and rubber bullets.

Thousands of protesters were active at the many inaugural parade entrances, often blocking the entrances. Different issues were highlighted, among them feminism, Black Lives Matter, white support for racial justice, support for trade justice that puts people and planet before profits, immigrant rights, climate justice and more. Each checkpoint used different tactics to either block the entrance or put out messages on key issues.

A marijuana legalization group gave out 8,000 joints for the Trump inaugural. The event, #Trump420 began late in the morning, with many activists lighting up joints 4 minutes and 20 seconds into Trump’s inauguration speech. There were no arrests for the inaugural group smoke session and participants made clear they hoped President Trump would see legal marijuana as a rapidly growing industry. Forbes reported last week the Green Rush will be bigger than the dot-com boom of the 90s.

The inaugural parade may have had more protesters than Trump supporters. Along the entire parade route protesters could be seen. Just one protest area organized by the ANSWER Coalition, solidly filled two blocks with Trump protesters.  The Secret Service moved to prevent the media from covering the ANSWER protest by barring the media from attending their event. 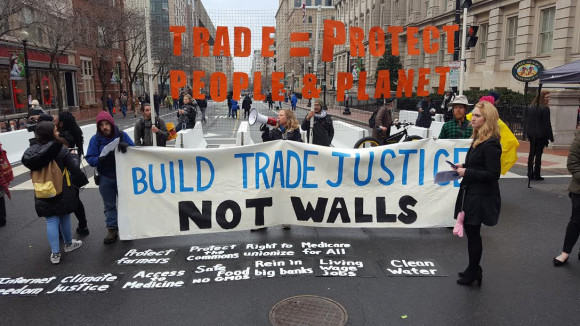 Trump upset many of his supporters by starting the parade late after a very long lunch, leaving them in the cold and in the dark by the time the parade ended. At the lunch, Trump expressed admiration for Bill and Hillary Clinton and led a standing ovation for them, highlighting the bi-partisan nature of the two parties that represent Wall Street and war. Trump had wanted a very different kind of parade than usual – more like North Korea or the old Soviet Union – including tanks and missile launchers in the inaugural parade. The military denied the request. They did approve five military flyovers, not typically part of inaugural parades, but they were canceled due to poor weather conditions 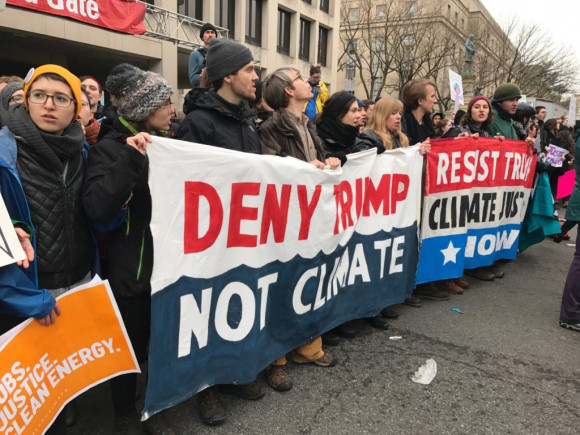 Protesters were brought together at noon by a Festival of Resistance that began at Columbus Circle outside of Union Station and ended at McPherson Square for an afternoon gathering. The colorful march featured people on stilts wearing costumes, a massive human float saying “we are all in this together”, the racism elephant and well more than 10,000 people. During the afternoon, I-395 was closed by protesters and people continued to protest throughout the city, often generating police conflicts.

After the inauguration, many of the people attending parties to celebrate the Trump presidency found themselves delayed by conflicts between protesters and police. Reportedly, people dressed in black tie and high heels were getting out of their limos and walking to events. 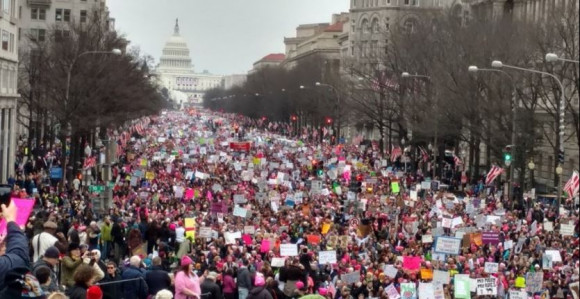 The first day of the Trump administration, one of the largest marches in recent history was held. The Women’s March drew hundreds of thousands of people, with Metro reporting 100,000 more riders for the Women’s March than on Inauguration Day. More people showed up for the women’s march than for the Trump inauguration. The march had a permit for 200,000 people but officials looking at hotel rooms and buses coming to DC expected more and march organizers said that as many as half a million people had turned out for the D.C. event.*

Both the DisruptJ20 protests on Inauguration Day and the Women’s March on Washington were nationwide and global. J20 protests were held in many US cities, among them New York, Atlanta and Chicago. Tens of thousands of people participated. The Women’s March reported that there were more than 600 sister events in over 60 countries, with support streaming in from all seven continents.

Donald Trump was welcomed to the presidency by large protests around the world. As John Zangas of the DC Media Group, which covers the movement in Washington, DC, described the charade of the “peaceful transfer of power” writing:

Today’s “peaceful” change of Democratic government was a fairytale in a way, a myth, and a story of worsening division between people. In some ways it was reminiscent of other cities like Cairo, and Ankara, where change of governments comes with police lines, military deployed in the streets, and unruly citizenry.

There was plenty of that here today. While the National Guard stayed in the background-the fact that they were deployed during a peaceful change of government signifies it really wasn’t truly a peaceful transfer of power.

Where Does Persistent Protest Lead?

Protest is a critical ingredient for people power to succeed but it is only one ingredient. Protests can actually strengthen those in power by building sympathy for them or justifying the use of force if they are not used in a strategic way to build a mass movement that will impact the power structure, accomplish a transformation of policy or build an alternative system.

Education is a critical element in building a powerful movement. Misinformation is a tactic used by the oligarchs that we must carefully navigate and expose:

“We are transferring power from Washington, D.C. and giving it back to you, the American People.”

“For too long, a small group in our nation’s Capital has reaped the rewards of government while the people have borne the cost.”

“Washington flourished – but the people did not share in its wealth.”

“Politicians prospered – but the jobs left, and the factories closed.”

“The establishment protected itself, but not the citizens of our country.”

These words could have been said by a progressive populist, but they are Donald Trump’s words. Of course, when we look at his cabinet of billionaires and generals, and his policy proposals from the extremist Heritage Foundation, we do not see an administration giving back power to the people. Within moments of becoming president mention of climate change, civil rights and LGBTQ issues were taken off the White House website, but Melania Trump’s bio contains a sales pitch for her QVC line of jewelry.

Trump’s rhetoric is reaching millions of people in the United States who are struggling with ongoing economic insecurity. People are sick of the corruption of elected officials in Washington, DC by big money corporate interests, especially from Wall Street, just as President Obama’s call for “change you can believe in” and Bill Clinton’s “a man from Hope” all played on the same theme: the United States needs to transform from a government of elites to government for the people. Trump is singing the same lying song and putting in place the bricks of betrayal of his voters. 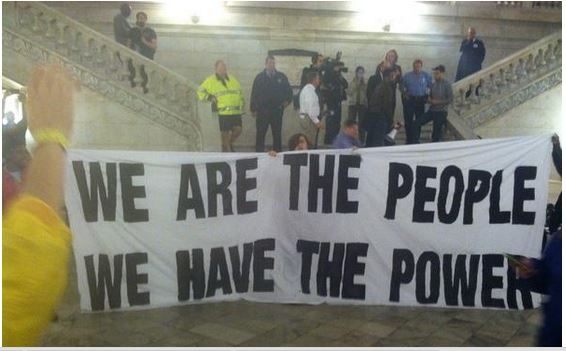 People have the power; protest in Ferguson City Hall in 2014.

It is not enough for us to protest Trump, we must protest the system that oppresses all of us, and build power – first, the power to change the political dialogue and second, the power to put in place the transformation we need.

While Trump, and Obama before him, can rhetorically claim to be giving power to the people, the truth is the only path to popular power is for us to build power and then to take power. Let us continue to take action to insure that this inauguration of protests is another key step toward that goal.

* Note on the Women’s March. We were unable to attend the Women’s March because we were physically exhausted from two days of protest that preceded it and we had to get this newsletter out. However, colleagues who attended the march reported that it was infested with Democratic Party officials, including the extreme corporatist, Debbie Wasserman Schultz, who was the head of the Democratic National Committee when the DNC sided heavily with Hillary Clinton over Senator Bernie Sanders. Numerous Democratic lawmakers were on the stage, mostly women, but also including Rep. Steny Hoyer. Hoyer is the number two Democratic in the House and is a big business funded Democrat who represents so many of the problems in the Democratic Party. We were disappointed to hear the Democrats were trying to co-opt the Women’s March.

The Democrats hid their involvement in the march, no doubt because many are dissatisfied with the Democratic Party. It is interesting to note that they did not announce their participation until people arrived at the march. Speakers from the Democratic Party were not listed as speakers of the event on their website and the DNC was not listed as a sponsor so no doubt many of the people attending were there for women’s rights and to stand up to Trump’s misogyny, not for partisan purposes.