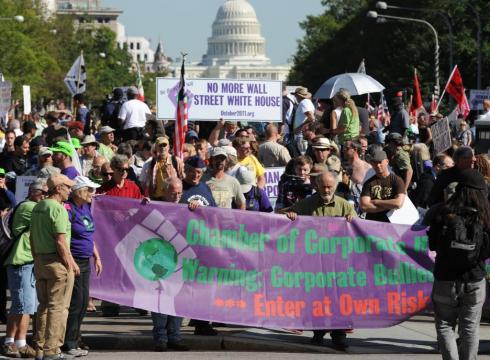 Newsletter: The Movement Matters Most

While some people are calling 2016 the worst political year ever, we are optimistic that the movement is on track for transformational change.  Of course there are significant challenges ahead, but there are also important opportunities. We knew all along that no matter who won the elections this year, they would be plutocrats, and we, the people, would have to organize and resist; to demand the change we want to see.

If we look at the big picture, 2016 was a time of progress in political education, movement building and reaching national consensus. We saw the movement’s strength grow as it stopped the Trans-Pacific Partnership, the ShellNo campaign stopped arctic drilling and pipeline resistance slowed the growth of carbon infrastructure. These are all elements that are necessary in successful social movements. If we continue to make progress in the years ahead, then our collective work will build a mass movement that will have a greater long-term impact than the incoming administration and Congress. 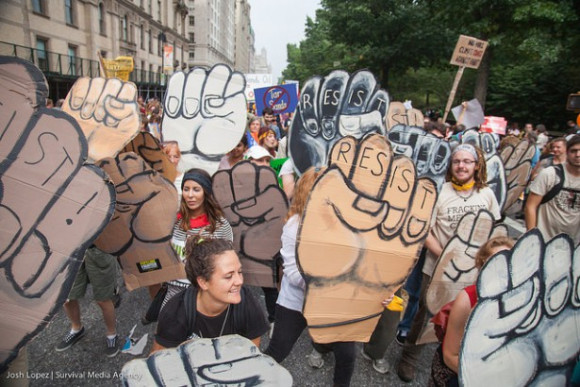 In previous newsletters, we have written about the eight stages of successful social movements as defined by the deceased activist Bill Moyer (not to be confused with the journalist Bill Moyers or Bill Moyer of the Backbone Campaign).  We are in stage six. Stage seven is success and stage eight is defending the success and moving to the next struggle.

A key thing to note about successful social movements is that one never knows how close the movement is to winning. The most difficult times often occur when victory is just around the corner as the power structure stiffens its back in fear of the movement.

The tasks of stage six, our current stage, are 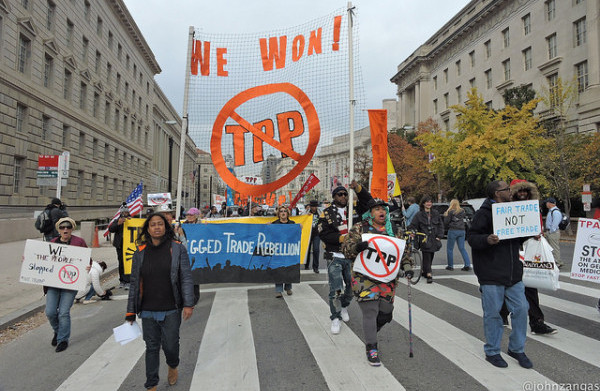 Moyer writes that stage seven is victory. It occurs when both public awareness that there are problems and opposition to the power holders are very high and when there is a spike in support for alternative solutions.

The form that victory takes has important implications for how we prepare ourselves. Moyer describes three paths to victory:

Stage eight is the time to defend the victory and to take on the next struggle. This means, as you probably guessed, that activism is lifelong work. The good news is that for many activists, it is a labor of love that can be very fulfilling and creates a strong community of people who are engaged in a common effort. In his blog about the first days of the occupation of Freedom Plaza in 2011, psychologist Bruce Levine writes that activism is an antidote to despair. He says:

“Almost as soon as I entered Freedom Plaza in Washington D.C. on October 6, I experienced a wave of pleasant feelings and energy.”

In early 2011, when we started to organize the occupation of Freedom Plaza, we found that many activists shared similar thoughts. At that time, it was a recognition that the traditional tools of advocacy weren’t working and we would need to do something different. Inspired by uprisings in the Arab Spring, in Madison, Wisconsin and by the Spanish Indignados, the organizing group decided to plan an occupation in Washington, DC. In 2014, dominant themes in the various movements were  greater understanding of the connections between our issues, called intersectionality, and the importance of working in solidarity with each other.

In 2016, a dominant theme is more clearly defining the vision of the future that we want to see, or our demands. This is why we are promoting the People’s Agenda. It was created in 2011 during the preparation for the occupation of Freedom Plaza and during the physical occupation by various working groups. The People’s Agenda has since been amended as various movements, such as Black Lives Matter, published their demands. It is a framework that needs greater elaboration to more clearly define details, but it provides a platform for building national consensus for the alternative solutions we seek. 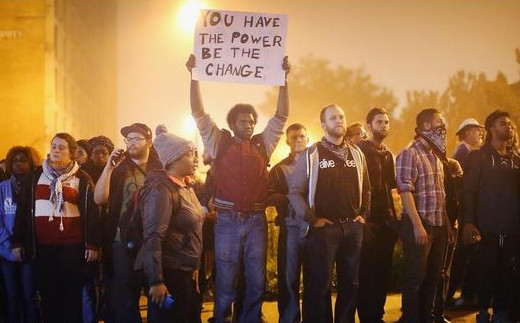 As we enter 2017, we see many opportunities to further the necessary work to build popular power for the transformational changes we require. The election of Donald Trump brings front and center many of the issues that exist in the United States – the mistreatment of Indigenous people and other people of color, unequal treatment of women and the LGBTQ community, misplaced anger at immigrants and Muslims and other forms of bigotry. He will also continue to expand the economic injustices against workers; the growing wealth divide that impacts everything; an unfair tax structure that funnels wealth to the top; a healthcare system that fails to provide adequate healthcare; and corporate-friendly policies that undermine the environment, health and safety. People who voted for Trump because of economic insecurity will find he is a charlatan that produces less economic security.

Some voters supported Trump because he was viewed as not being an establishment politician, like Ted Cruz or Hillary Clinton. Voters felt betrayed by the Democratic Party for speaking in progressive language but putting pro-Wall Street and militaristic policies in place. Some voters stayed home because they recognize that neither major political party represents their interests and they are tired of what we call ‘Ping Pong Politics,’ in which the parties in power switch between Republicans and Democrats but the direction of the country remains the same. And some voters, mostly those in marginalized communities, were prevented from participating in the election through a variety of voter suppression mechanisms. 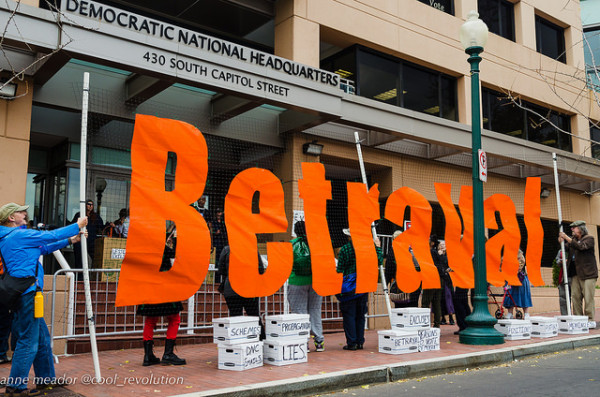 This is the year to educate, organize and mobilize a diverse movement of movements to set the political agenda. Together, we have the power to do that if we use it. At Popular Resistance, we will support this work in any way that we can.

If you have events such as meetings, actions or conferences, send the details to us at info@popularresistance.org and we will post it on the Popular Resistance calendar. Already, people are meeting in their communities to discuss how to organize to protect vulnerable members in anticipation of attacks on Indigenous sovereignty, Muslims, immigrants, communities of color or women,  those who depend on social safety net programs and independent media. People are meeting to plan how to address the climate crisis under an administration that doesn’t believe it exists.

Join Popular Resistance and other groups at the Inauguration for Disrupt J20. Popular Resistance’s Trade for People and Planet campaign is working with the Trade Justice Alliance to plan a demonstration for trade justice in Washington, DC during the inauguration. Click here to sign up for the action and click here to register for the organizing call on Wednesday, January 4 at 9 pm Eastern/6 pm Pacific. This will also be an important time to network with other activists. An action training camp is planned for January 14 to 16 and there will also be actions in DC on January 19.

Organize around the People’s Agenda. This can be done both locally as you push for positive solutions in your community and nationally through coordinated days of action. You can start by using this easy tool to write a letter to the editor. Click here to get started. And you are invited to join regular National People’s Agenda conference calls to hear from other activists and share what you are doing. The next call is Wednesday, January 11 at 9 pm Eastern/6 pm Pacific. Click here to register for the People’s Agenda calls.

We’ve come a long way since the days of our occupation in Freedom Plaza. Let’s keep going and growing to stop the machine and create a new world. 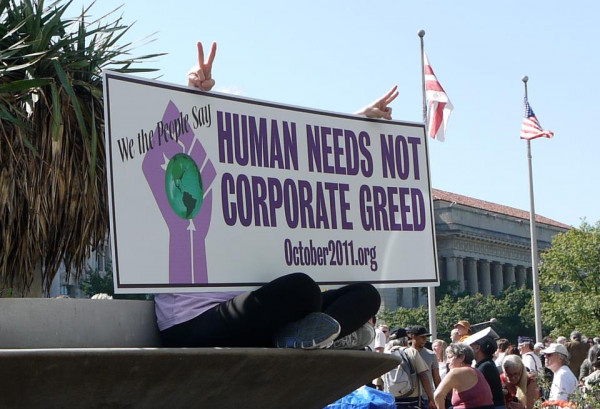