Newsletter: The Movement Must Respond To Racial Violence

We had planned to focus on climate change this week given the contradiction between not just the science of climate change but our lived-reality of it getting stronger while the Trump administration denies this reality. An impressive government report on the climate crisis was recently leaked out of fear that the Trump administration would prevent its publication. At the same time, a wide variety of resistance actions are being taken by people across the country to stop the construction of more carbon infrastructure and people are working to increase the use of cleaner, more sustainable energy sources.

The events in Charlottesville, Virginia yesterday required us to change course and attempt to put the racist violence that occurred into historical and political context as well as to discuss what the movement should do to respond to aggressive racism by extremist groups. 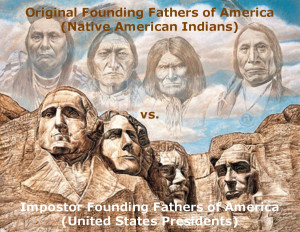 The United States is a country founded in the establishment of both white supremacy and resistance to it. As we discussed last December on Clearing the FOG with author Roxanne Dunbar Ortiz, the theft of land and resources from Native Americans, then called ‘savages’, funded the rise of the United States. Slavery was also a dominant sector of the economy and one reason for seeking independence from Britain, which was moving to abolish slavery. The US’ property-rights, not human rights, Constitution was written for the ruling class to protect its most important “properties”: slaves and land. Yet, rarely are these facts discussed or their implications for our society today considered.

Alongside this history is an ongoing struggle for equal rights and restitution or reparations. This struggle has waxed and waned for centuries, and is coming to a peak once again. Many had hoped that the election of the nation’s first black president would prove that we truly lived in a post-racial society, but that couldn’t be farther from the truth. With a few minor exceptions, President Obama continued the same policies that perpetuate systemic racism and white supremacy. It was under Obama that the US destroyed Libya and tightened its military grip on Africa, that poverty and economic inequality grew and that the militarization of police and aggression towards communities of color, including Muslims and immigrants, persisted. It was under Obama that the Black Lives Matter movement was created to respond to police killings.

The election of President Trump has taken this to the extreme. He lacks the sophistication of past leaders and so he fails to hide it well. As a people, we in the United States are now experiencing blatant bigotry, racism and imperialism. It can no longer be ignored. And it forces each of us to make a choice. 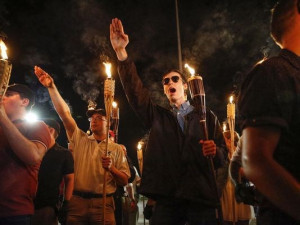 As we wrote last week, the crises that we face have given rise historically to three outcomes – the rise of right wing nationalism, an era of progressive reform or great social transformation. Right wing nationalism protects the interests of the ruling class because it maintains the systems of oppression that allow them to exploit people and the planet and to justify the restriction of civil and political rights. Most recently, the US has financed and supported right wing extremists in the Ukraine and South America in order to conduct coups. Will this administration passively or actively allow those elements to rise at home to suppress popular movements?

Charlottesville as a Flashpoint

Tensions and altercations at the protests have escalated. The May protest, led by Richard Spencer, was fairly small and uneventful. In July, about 60 KKK members, with a heavy police presence, were allowed to march to the statues, rally and leave. They were surrounded by 1,000 anti-racist counter-protesters. Police used tear gas on the counter-protesters and arrested a few of them for blocking the KKK. For this weekend’s protest, Unite the Right organizers urged people to bring weapons and several militias attended wearing military gear and carrying assault rifles. 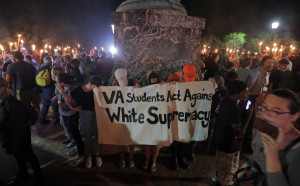 On Friday, a group of people wearing khaki pants and white polo shirts, like President Trump, marched through the city chanting “blood and soil,” a Nazi slogan. Militias also marched through the city and assembled at “Emancipation Park,” where the Unite the Right rally would take place the next day. That night, a large group marched with tiki  torches on the University of Virginia campus chanting “White Lives Matter”  and “You will not replace us.” Counter-protesters were present and there were conflicts between the two sides.

Saturday, fights started in the morning well ahead of the planned rally at noon. Pro Publica reports that police stood by during the conflicts in which young right wing protesters attacked counter-protesters. The Governor called off the rally before it started and police forced Unite the Right supporters from the park. 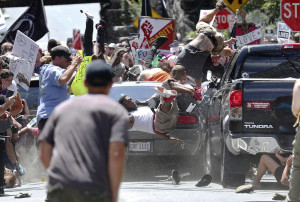 Anti-racist counter-protesters were starting to march away from the park when a 20-year-old Ohio man, James Alex Fields, drove his car into the crowd, killing 32-year-old Heather Heyer and injuring 19 others, five of them critically. Support Heyer’s family here. Her mother says she is proud of what her daughter was doing and hopes her death becomes a “rallying cry for justice.” Fields was later arrested gently by police. It was hard not to speculate how he would have been treated if he were black or brown. Unite the Right protesters vow to return.

Public responses to the violent, racist protest and the terrorist attack by Fields were swift. Politicians across the political spectrum spoke out against the racist-hate violence. People marched and held rallies across the country and internationally, and solidarity rallies are planned across the country for today. Friends of Heather Heyer are asking people to hold a candle outside their house tonight at 10:00 pm Eastern in her memory and against hate. These public displays are important to show that the KKK, Nazi and other right wing extremist groups are the fringe and do not represent the views of most people in the US. It is important to prevent the extreme right from gaining any momentum and escalating violence, and there is also a need for self-defense and justice. 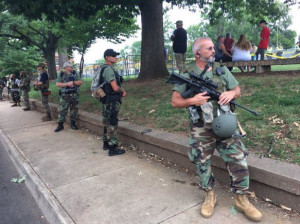 What happened in Charlottesville raises many questions.  Why were armed militias allowed to march and gather in public when it is illegal to carry weapons openly? Why did police stand by when protesters and counter protesters fought? And why didn’t the police escort the counter-protest march when it left the park? The FBI and Department of Justice plan to investigate the events. This must be done in an open and transparent way and with a mechanism to hold local authorities accountable. In Germany, there is no tolerance for Nazis and those who espouse hate. We must demand the same here. President Trump’s weak response opposed violence and hate but avoided criticizing racist hate groups.

People in the US are facing the consequences of a long history of racism and oppression, which are connected to an economic system based on profits for the few no matter the costs to the many. The economic crisis and growing wealth inequality have created great insecurity. Economic insecurity is being used to generate fear and divide us against other. It will take great effort to resist.

The US is becoming a majority-minority country and for children five years old and under it already is, as a majority of five year olds are non-white. This change along with economic insecurity is making some uncomfortable. Both political parties play on these fears with, in general terms, the Republicans and Donald Trump reaching out to insecure whites and Democrats seeking the support from communities of color. Trump’s theme of “Make America Great Again” was interpreted as a dog whistle to many — harkening back to the time before there was a black president. Former KKK Grand Dragon, David Duke, said at the Charlottesville rally that they were fulfilling Trump’s agenda. And, while Trump was criticized by many leading Republicans for refusing to name the Nazis and racists, white supremacists applauded him for not doing so.

The Tasks Of The Movement 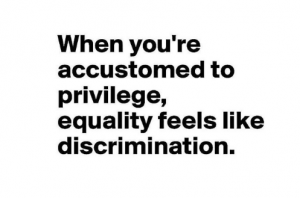 We must present a vision of a future that is better for all of us, one in which we recognize our history and take measures to resolve the damage that has been done while we transform our current systems to be more equitable and sustainable. This means seeking racial justice and ending white supremacy, and educating fearful whites that this is not an attack on them individually but a systemic problem that has existed since the founding of the country. We must all learn that if we are not working to dismantle these racist roots, we are condoning them.

At the same time the movement must work to create a fair economy for everyone, where among other things, high quality health care is available for all, a basic income ensures people’s economic stability and a national jobs program is put in place to rebuild US infrastructure and transition to new forms of energy.  At the same time, we must consciously build a new economy in which all people build wealth, workers own and direct businesses, post-high school education is tuition free and the wealth divide is shrinking. See our economic project, It’s Our Economy, for more on this. One vision that is being shaped currently is the People’s Congress of Resistance Manifesto. Join us on September 16-17 to participate. 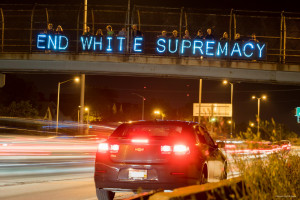 None of us can be silent in this time. Silence is complicity. Each of us can do something. Read to better understand our history and discuss how it impacts us today. Don’t allow us to be divided against each other. Build solidarity in your communities, especially with those who are most oppressed. Speak out when and where injustice occurs and work to meet each other’s needs. We can weather this storm if we are prepared for it.