Newsletter: The State Of The Union And Movement

The United States is a failing empire: the domestic economy has fallen to a level equivalent to a developing nation for most of us while the stock markets, especially for weapons-makers, are at record levels.

It has taken decades for the US to get here. Long-term mis-leadership created the environment where a “Make America Great Again” presidential candidate, whose fame came from being a reality-TV star and someone who put his name in giant gold letters on every business he ran, could con his way into office in large part because he is not a politician. 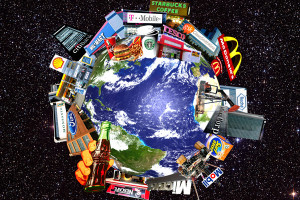 The United States has become a parody of itself. It lectures other countries on human rights abuses while it has high levels of poverty, the highest number of preventable deaths due to lack of access to health care and the highest rates of incarceration. The infrastructure and public education systems are failing, but instead of investing in building them up, which would boost the economy, the government proposes increases in military spending and tax cuts for the rich. The US claims to be a defender of democracy, but there is no democracy in the US. It is a mirage hiding a plutocracy or perhaps more literally a kleptocracy.

Given a choice between the status quo, which hasn’t been working, and a candidate who portrayed himself as anti-establishment, voters called the bluff and voted for Trump. Now the US has become a joke to the rest of the world.

Instead of analyzing why we’ve found ourselves in this situation, the establishment blames Russia. The Democrats are pretending to be “the resistance,” but they forget that the people know they are kleptocrats too, willing to sacrifice our communities to make wealth for themselves and profits for their corporate friends while most people live with economic insecurity.

Trump’s election woke a lot of people up and sparked new levels of activism. As we reach the one-hundredth day of this new administration, it’s a good time to reflect on the state of the union and of the movements for peace and justice. 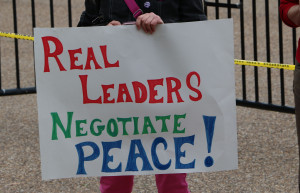 The Decline of US Global Empire

The fall of US Empire is intimately connected to the decline in living conditions within the United States. Richard Moser writes, “As corporations have an insatiable drive for profit, empires have an insatiable drive for power. And that makes imperial actors hostile to the limits on authority, checks and balances, separation of powers and basic rights that the U.S. republic at least aspired to.”

President Trump campaigned on the premise that he was opposed to US intervention and regime change, but in reality, he loves the military, and so do the establishment Republicans and Democrats. As president, he is on track to outdo Obama’s achievements, which outdid Bush’s achievements, in drone killings, bombings and military spending. Trump has asked for $54 billion to be added to the bloated and un-auditable military budget. He is escalating conflicts in Yemen, Iraq and Syria, dropped the largest non-nuclear bomb on Afghanistan and is threatening wars with North Korea and Iran. The US’ relationship with Russia has deteriorated, in part because of the Democrat’s incessant demonization of Putin and Trump’s rhetoric favoring détente, and this risks a global conflict with Russia and China as allies against the US.

The Trump Administration is losing credibility within the international community. President Trump claimed that the US’ largest aircraft carrier, the USS Vinson, was being sent to North Korea when it was really thousands of miles away and headed in the opposite direction. It recognized recently that Iran is being compliant with the nuclear deal, but then Trump said Iran was “violating the spirit” of the deal. That makes no sense but does that matter in the fake news world of US propaganda. Trump’s reckless and ill-informed pronouncements risk not only further deterioration in confidence but more war. 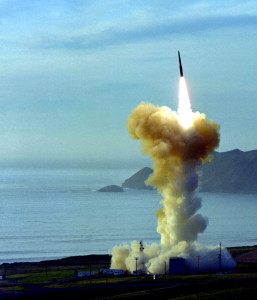 If empires have insatiable drives for power, we can expect more escalation rather than reason. US empire may go out with a scream rather than a whimper. Failing empires are likely to be dangerous. On April 26, the US tested an intercontinental ballistic missile. Andrew Lichterman explains that this was a message to the world: “the United States has nuclear weapons, and is prepared to use them.” The test was done while the US was threatening war with North Korea if they test one more missile. The world sees US hypocrisy and there will be a backlash against it.

What are the consequences of a failing empire at home? As more of our resources are spent on the military, more cuts will be made to necessary domestic programs, which will result in greater suffering. And that’s not all. The resulting opposition to the militarists and profiteers will have to be squelched. Moser describes the recent history of efforts to limit dissent in the US as imperialism coming home. One current example is the mass arrests of 200 protesters at the inauguration last January. This week, DC prosecutors added more charges to those who were arrested and charged an additional three people based on weak evidence. They rely on conspiracy charges because they cannot prove individual cases — so everyone is guilty. Another example is the threats against Julian Assange and Wikileaks for publishing documents that show us the truth.

The State of the Movement

The election of President Trump has taken all of the realities of the United States and thrown them in our faces – the militarism, racism, misogyny, hatred towards immigrants, wealth inequality, Wall Street corruption and capitalist economy. While many people have recently been activated by Trump’s election, the ground for mass uprising has been fertile as problems have existed for a long time. Resistance was growing before this year, from the anti-globalization movements of the late 90s to the anti-war movement at the beginning of this century to immigrant rights, Occupy Wall Street, the fight for 15, black lives matter, anti-pipeline movements and more. The Obama era was an awakening of protest that provides the foundation for today’s resistance mobilizations. 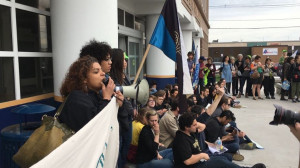 Sit-in at ICE office in Boston, May 24, 2017 by Movimiento Cosecha‏. From @CosechaMovement on Twitter.

There is a lot of great work being done on a broad range of issues and movements that are making serious efforts to organize strategically and in solidarity with each other. The May Day protests coming up on Monday are one example. The destruction of the open Internet was announced last week and the protest movement is growing to save the Internet. Trump announced a tax plan that the kleptocrats will love but will leave the rest of us worse off. And, the student debt crisis is on the verge of explosion. Resistance will be growing on many fronts.

There are new people and groups of people that have started organizing and mobilizing. The media has been portraying the mobilizations as anti-Trump, but it is critical to understand that Trump is an extreme symptom of a dysfunctional system. We must understand the roots of the crises we face in order to create meaningful and sustainable changes.

Here are two key areas that need to be addressed:

First is to recognize that the Democratic Party is complicit in creating the current situation. As much as the Democratic Party and its front groups like MoveOn and Indivisible try to paint themselves as the ‘resistance,’ the reality is that electing Democrats will reinforce the status quo, not change it.

For example, during the healthcare reform process in 2009, it was groups like MoveOn, Families USA and the unions that gave cover to the Democrats and the Obama administration to shut out the solution that most people supported, National Improved Medicare for All, and instead put in place a law that enriched the medical industrial profiteers like private insurers and Pharma. Democratic Party cheerleaders and even self-described populist, Jim Hightower, applaud the Affordable Care Act for making record profits for these industries. While the Democratic Party aligned groups have done well organizing responses at town halls, they have not joined the growing campaign for improved Medicare for all. 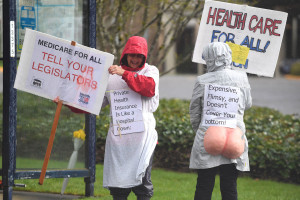 The Republican’s failed attempts to repeal and replace the ACA demonstrate that the public will not tolerate any more movement of the healthcare system to the right. In fact, support for Medicare for All is growing across the political spectrum. Still, the Democrats held a press conference this week in the Capitol and refused to discuss it. They focused on ‘fixing’ the ACA because they are unwilling to challenge the industries that fund their elections. The unsaid truth: The ACA is unfixable because it is based on private insurance and is a gift to the pharmaceutical industry. The US must transition from a market-based, for-profit system to one that treats health care as a public good that serves us all.

Now that Obama is no longer president, he is receiving his pay off and reinforcing the view that the Democrats are out-of-touch elites in government for themselves. Just this week, he agreed to speak at an investment bank’s healthcare conference for $400,000. The conference will bring together healthcare profiteers from the pharmaceutical and insurance industries and investors from Wall Street who are getting wealthier from the Affordable Care Act (ACA).

Second is that there is a desperate need for the peace movement to revive in the US. Perhaps Obama’s greatest pro-war action was decapitation of the anti-war movement. There was a vibrant peace movement against war during the Bush administration but it largely disappeared with the election of Obama. If we are to prevent escalation of militarism into a global conflict and potential nuclear war, we need to recognize that militarism is connected to every issue that we care about from racism to poverty to the environment and more. 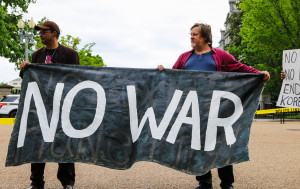 Over the past month, the Trump administration made serious threats to attack North Korea. Not a single Democratic member of Congress spoke out and the media misled the public into believing that North Korea is a threat to the United States. Popular Resistance mobilized people to call their Senators to tell them to negotiate with North Korea rather than attacking it. We want to thank the thousands of you who responded. We were present, with allies such as CODEPINK and the ANSWER Coalition outside the White House when the Senators arrived there for a briefing to show our opposition. Activists in San Francisco also urged peace talks with North Korea.

The administration announced on Friday that it would engage in talks directly with North Korea. Let’s hope that we have averted a US attack and the risk of a global conflict. You can learn more and take action here. We cannot assume that Trump and Tillerson will stay on the course of negotiation and peace, we must hold them to the promise of diplomacy.

Here are positive steps we are supporting: The United Antiwar Coalitions’ conference, “Stop the Wars at Home & Abroad: Building a Movement Against War, Injustice & Repression!” is being held this June. The #No54BillionForWar campaign, which was launched on the anniversary of the assassination of Dr. King, is calling for our dollars not to be spent on war but to be spent on human needs such as education and health care. And finally, the Black Alliance for Peace was also launched this month. Co-founder Ajamu Baraka describes the focus as “opposing both the U.S. global military agenda as well as the war and repression being waged on black and brown communities domestically.”

We have a lot of work to do. The movement and nation continue to need deep political education to understand that the roots of our problems are much greater than Trump and to build much greater power to overcome this corrupt system. We must be clear in our goals and uncompromising with the kleptocrats and militarists. Keep educating, organizing and resisting, with a failing empire and an economy that only works for a few, the opportunity for change is great.