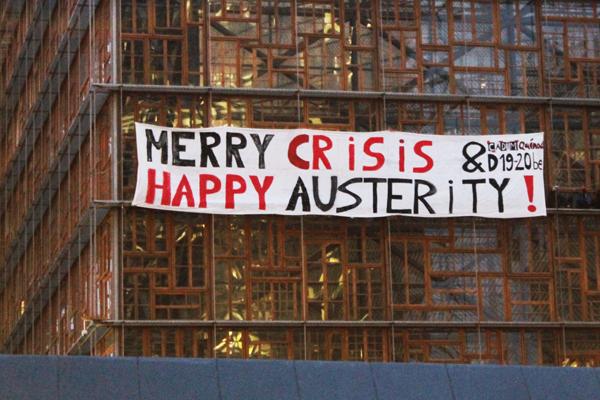 George Lakey of Waging Nonviolence wrote about the root cause of the recent protests in Sweden – increasing wealth inequality from austerity measures imposed over the past few decades. The media reported that the protests were a response to the police murder of a 69 year-old man, but they were actually due to a growing division between classes that is also fueling racism. Even though the wealth divide is much smaller in Sweden than it is in the United States, it is obvious to Swedes when compared to surrounding countries. 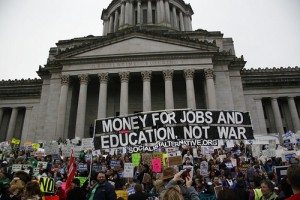 In the United States, austerity measures in the form of cuts to social programs, lower wages and tax cuts for the wealthy have also fueled tremendous wealth inequality and economic insecurity. Similar to Sweden, this is the root of civil unrest. Lakey urges people in the US to fight back via nonviolent revolution.

Health care is back in the political spotlight again. The so-called Affordable Care Act (ACA), also known as Obamacare, is failing. The number of people who have health insurance has plateaued leaving 29 million people uncovered. The price of premiums and out-of-pocket costs are rising so that even people who have health insurance are unable to afford care. The Democrats and their base are finding the ACA difficult to defend, especially considering that a super majority of Democratic Party voters want National Improved Medicare for All (single payer).

The Trump Administration and Republican Congress are working to find a way to repeal the ACA and replace it with a plan that will further cut our public insurances and create cheaper, but skimpier, private health insurance plans. Dr. Don McCanne translates President Trump’s healthcare plan as described in his speech to a joint session of Congress this week: 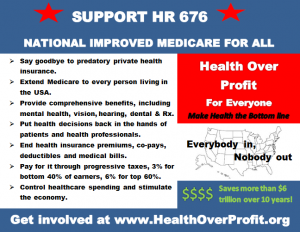 “It looks like Trump’s promise of ‘insurance for everybody… much less expensive and much better’ is deceptive. Insurance for everybody means access to insurance, not actually being insured. Much less expensive means insurance that does not protect your financial assets, it you have any. Much better means that you have a choice of purchasing worthless plans, if you call that better.”

Michelle Chen writes in Truthout that the public is convinced that now is the time for National Improved Medicare for All, and the task at hand is to pressure Congress members to support it. Here are actions that you can take:

Rallies are being planned for April 1 to call for protections within the ACA to be preserved and for single payer health care. And on April 7, we are participating in an international day of action against the privatization of health care: “Our Health is not for Sale.” Click here for more information.

Austerity for most of us

The President will release his budget soon. David Swanson of World Beyond War lays out the folly of President Trump’s proposal to dramatically increase military spending when we could use those dollars to solve the many crises we face such as hunger and the lack of clean water, student debt and the need to move rapidly to clean renewable sources of energy. Our budget reflects the priorities of the government. This administration, like past ones, is choosing the war profiteers and corporations that need their protection as they pillage the planet over the needs of people at home and around the world. 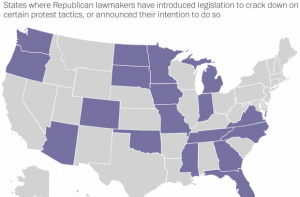 Widespread civil unrest is growing in the United States. As in Sweden, it is fueled by economic insecurity and assaults on people’s rights. Instead of responding with solutions to the current crises, governments are working to stifle dissent. In 18 states, lawmakers introduced bills that would restrict protest or increase penalties for protesting. Arizonans fought back and won this week against a bill that would make it possible to charge protesters under racketeering laws and seize their property if violence occurs at a protest, even if the person didn’t do anything.

In the recent Day Without Immigrants, one hundred workers were fired for participating in the strike. More strikes are being planned, a Woman’s Strike on March 8 and widespread strikes on May 1. Leora Smith describes steps that workers can take to protect themselves when they strike.

Risks and Benefits of Protest 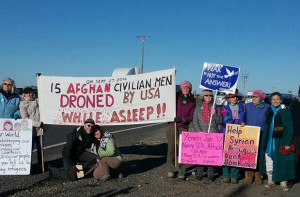 If the government continues on its destructive path ignoring the will of the people, then protests will grow. It is critical to be strategic when undertaking protest campaigns. Outrage, when channeled constructively, can bring about significant changes. Anti-drone protesters in upstate New York had a significant victory this week. After years of protesting drone bombing at Hancock Air Force Base outside of Syracuse, and being jailed for doing so, a jury found that the protest was justified and essentially nullified the charges even though the defendants admitted guilt. 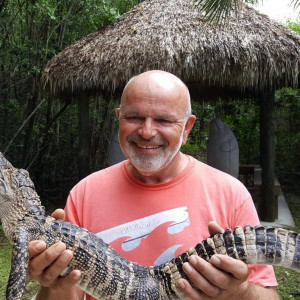 This week, an environmental activist, James Leroy Marker, was shot and killed by Florida police after sabotaging the Sabal Trail Pipeline. The pipeline endangers fragile environmental areas. And this week was the one-year anniversary of the assassination of Berta Cáceres in Honduras for fighting a dam project. The Guardian found that “her murder was a well planned military operation conducted by elite troops trained by the United States.”

We also remember that Trayvon Martin was shot and killed five years ago this week. Click here for actions that you can take to remember Trayvon.

The media often downplay protests by saying that they are ineffective and not giving them credit for victories; however, protests are working. Even when they don’t achieve their goal, such as stopping the Dakota Access Pipeline, protests bring people together, educate about issues, teach new skills and empower people. A critical element to successful campaigns is to be strategic.

While we recognize the fears and concerns about the Trump presidency, we must also recognize that he did not arise in a vacuum. It is growing insecurity that drives fear, and the elites’ use that fear to divide us against each other. We must stay focused on the root of the crises, an economic system that drives exploitation and a government dominated by wealth. We can turn crises to our advantage by building on the uprisings they instigate to push for changes that transform the whole system.

Kevin Zeese and Chris Hedges discuss resistance in the era of Trump in greater depth in this week’s episode of On Contact. Click here to watch it. We have combined this interview with summaries of previous newsletters to examine the impressive growth of the resistance movement, the challenges we face and the potential of people power. People are realizing they have power and that when they use it, our potential is greater than we can imagine.