Above photo: Note the description by the media of post-Super Bowl events. “Fans celebrate flipping over a SUV on Walnut. Eagles fans watch and celebrate their Super Bowl LII victory over the New England Patriots. Monday February 5, 2018. Philadelphia, PA, USA”

Corporate media outlets in the United States represent the interests of the wealthy elites. They distract the public with meaningless tidbits such as what a celebrity said or did, rather than bringing attention to critical issues. As FAIR (Fairness and Accuracy in Reporting) frequently reports, in the off chance that the media does cover a movement, the coverage is generally biased against the movement.

As a result, a useful tactic for getting attention is to go where the media are and present a clear visual message through giant banners and other techniques. That is what a variety of activists did last weekend around  the Super Bowl football game in Minneapolis, MN.

This week, we highlight the Super Bowl actions and other recent related actions around the country that show an active popular movement for economic, racial and environmental justice. 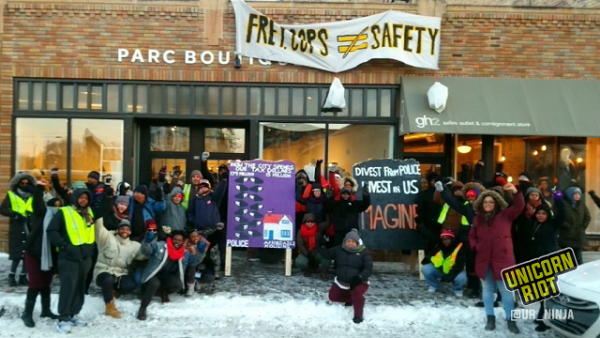 Invest in communities, not police

Several days before the Super Bowl, activists blocked streets around the Minneapolis Mayor’s condominium calling for greater investment in their communities instead of police. They dropped a large banner that read “Frey, Cops do not equal safety.”

Communities are more secure when people have resources to meet their basic needs such as affordable housing, living wage jobs, access to health care and high quality schools. Cities in the US over-invest in police and under-invest in public services such as schools and health departments. When police are in neighborhoods, residents are more likely to be victims of police violence and arrested. Their chances of finding and holding a job or caring for their families are then reduced.

Matt Bruenig of People’s Policy Project found that young families have almost zero wealth. He states, “Younger people have lower incomes, higher debts, and virtually no wealth to speak of.” Kenneth Surin provides a fact-filled report on poverty in the United States. Although the US is in some measures the wealthiest country in the world, it is also one of the most unequal and has poor outcomes on a wide variety of indicators. Surin explains that these outcomes are the result of policy choices that can be remedied.

Decisions to dis-invest in services and keep wages low have lifelong impacts. The American Academy of Pediatrics recently published a statement saying that a high quality diet during the first 1,000 days of life, while the brain is developing, is critical to functioning. Yet, more than half of all infants in the US are on nutrition assistance, putting them at risk of being malnourished. Low-income areas of cities are often food deserts, exacerbating the problem.

Some cities are starting to make positive policy choices. Atlanta voted to stop jailing people for minor crimes when they can’t afford to pay bail. In Portland, Oregon, activists won a fare reduction on public transit for low-income riders.  And San Francisco plans to use a public bank to provide more affordable housing and credit for small businesses.

Youth say “Police out of schools”

The night before the Super Bowl, youth marched to the home of the  school board chair. (click on the image above to watch their march). They brought a list of demands, which included opposition to program cuts and police officers in the schools, support for restorative justice training, small class room sizes and a $15/hour minimum wage for school staff and for schools to provide all gender bathrooms (demands are read at 12:18).

Police officers in schools are called “School Resource Officers.” Thandisizwe Chimurenga writes that the presence of police in schools has grown in recent decades, especially with schools that have high non-white populations. Police in schools criminalize behavior. Students are arrested and enter the judicial system, often referred to as the “school to prison pipeline,” where the negative impacts can be lifelong. Police also treat students violently. Students have been thrown to the ground, beaten and tased. Several students have brain damage from the violence and one student was shot and killed.

On the one year anniversary of Education Secretary Betsy DeVos’ confirmation this week, teachers marched to the Department of Education in Washington, DC to deliver 80,000 petitions calling for “adequate, equitable, and sustainable school funding… integrated schools… [and] protection from corporate charters and voucher vampires who steal our funding and give it to wealthy donors.” The response by DeVos was to lock the teachers out of the DOE.

Also on the eve of the Super Bowl, two groups that advocate for the rights of immigrants and workers protested at a Home Depot. They called for the company “to stop supporting oppressive immigration policies and create better wages and benefits for janitors.”

On February 12, the 5oth anniversary of the Memphis sanitation workers strike, thousands of workers across the country are planning actions to demand higher wages. They will participate in six weeks of “moral action” as part of the Poor Peoples Campaign.

The Poor People’s Economic and Human Rights campaign is organizing a March for Our Lives from the Kensington neighborhood of Philadelphia to Washington, DC where they will erect a Resurrection City this June. The original Resurrection City was built near the Lincoln Memorial in 1968 to create “a visceral demonstration of America’s neglect.”

Last week in Washington, DC, immigrant rights activists protested the end of Deferred Action for Childhood Arrivals (DACA) and lobbied Congress to restore DACA in the budget bill. There were mass protests on Wednesday when Senate leaders announced they reached a budget deal that excluded immigration reforms.

Water protectors organized actions in Minneapolis targeting US Bank and calling for divestment from fossil fuel projects. US Bank has yet to live up to its promise to stop financing Energy Transfer Partners, the corporation behind the Dakota Access Pipeline. Activists also raised awareness of sex trafficking near fossil fuel “man camps” and missing and murdered Indigenous women.

Shareholder activists are targeting Marathon Oil, a company that bought an interest in the Dakota Access Pipeline. They introduced a resolution calling on the company to “explain how it identifies and addresses environmental and social risks—including potential violations of the rights of indigenous peoples—when making business decisions related to acquisitions.”

Water protectors’ rights continue to be violated. Michael Little Feather Giron was forced to take a plea deal this week because he faced a hostile jury and restricted ability to present evidence at his trial. He may have to serve three to five years in jail for his actions at Standing Rock. Another climate activist, Michael Foster, was sentenced to three years for shutting down the Keystone Pipeline.

A new area of struggle is forming in Appalachia. China plans to create a large multi-state petrochemical storage hub along the Ohio River that will turn the area into another ‘cancer alley’ and drive more fracking in the region. West Virginia University is one of the large institutions supporting this initiative.

Water protectors fighting the Bayou Bridge Pipeline had a victory this week when a judge ruled that the pipeline construction had “already caused irreparable harm.” They are urging the judge to halt construction of the pipeline. And people fighting the Atlantic Coast Pipeline successfully occupied the North Carolina governor’s office for a full day in protest. 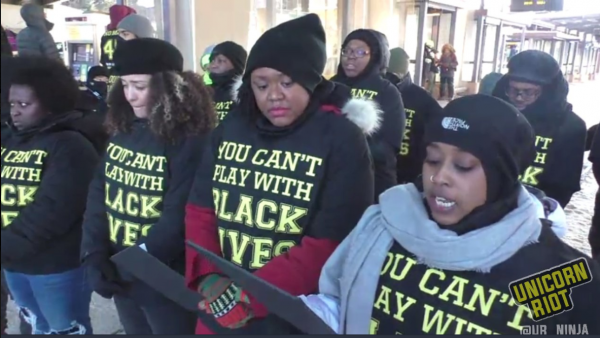 On the day of the Super Bowl, activists held a “take a knee” protest against racism outside the stadium and black lives matter activists shut down the light rail that transported riders to the stadium. For all of the issues described above, black and brown people are disproportionately impacted.

A new and obviously racist policy is the new designation by the FBI of “Black Identity Extremists.” The first person to be arrested under this classification is Dallas activist Rakem Balogun. He was under surveillance for two years.

David Love writes, “The FBI focus on Black Identity Extremists comes as white men emerge as America’s preeminent domestic terror threat, killing more Americans than are Islamic terrorists… white supremacists have killed 51 police officers since 1990, as opposed to 11 officers killed by left-wing groups… while the FBI has designated Black Identity Extremists as a terror threat, it has not similarly identified white extremist groups who are killing the vast majority of police, suggesting politics rather than data are at play.”

It is not unusual for people who challenge the status quo to be labeled as terrorists or otherwise marginalized. An excellent example is the media coverage of events following the Super Bowl. Eagles fans in Philadelphia took to the streets. FAIR describes what happened:

“Fires were set, some stores were broken into, and drunk people fought and caroused across the city. Crowds of (overwhelmingly) white male fans climbed poles, leapt off of building awnings, uprooted lamp posts and generally caused mayhem and havoc across the City of Brotherly Love. The celebration ended Monday morning with only four arrests, and with what NBC Sports (2/5/18) described vaguely as ‘vandalism and injuries.’”

We know how the actions would have been described if the people involved were mostly black or Muslim or were protesting an injustice. It is important for us to be aware of the ways the media protects the status quo and to both question what they say and not allow ourselves to be divided.  Solidarity in the struggle is foundational for our success in building a movement for economic, racial and environmental justice.