Above: Silence is complicity, The World is Watching, Trump Inauguration protest by Eleanor Goldfield for Art Killing Apathy

The broad social movement in the United States has been growing for a number of years, most visibly in recent years with the Occupy Movement and then immigrant’s rights, Indigenous, workers’ and Black Lives Matter movements, to name a few. As the inauguration protests, the Women’s Marches and the GOP protests in Philly showed this week, the broad social movement seems to be growing exponentially and some are escalating their tactics. 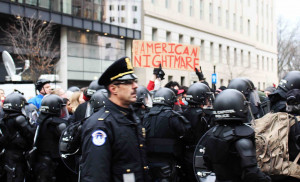 During the inauguration, there was a wide range of tactics used from permitted marches to peaceful blockades to property destruction. Eleanor Goldfield and Jason Yawn discuss black bloc tactics that included breaking windows, turning over trash cans and setting a limo on fire. They discuss why all tactics require consideration of whether the it will help to grow the movement or create blow black that strengthens the police and pushes people away from the movement. They raise the question of why people seem more concerned about broken windows than broken lives. To us, the use of tactics must always serve a strategy and goal. 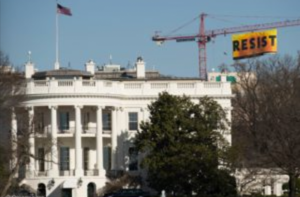 With daily assaults on our rights and the waning possibility of a livable future, one thing is clear: It is time for all of us to resist. That was the message seven Green Peace activists sent to Donald Trump on Wednesday with a 70 foot-wide banner hung from a crane within sight of the White House.

Resistance can and should be for positive changes. It’s not enough to fight against the status quo, we must change the systems. That’s why we are announcing a new campaign for National Improved Medicare for All. We choose this campaign because urgent change is needed with 30,000 people dying annually due to lack of access to healthcare. It is an issue that cuts across all races, genders and classes. And, it is an issue that has not been solved, despite obvious and simple solutions, because of the deep corruption of both parties. When we enact National Improved Medicare for All we will know the power structure is weakening. More information about the new campaign is below.

Fighting Back on Many Fronts 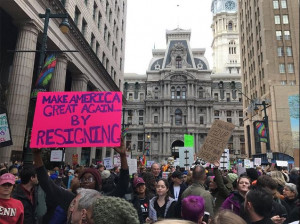 Trump protest in Philadelphia at GOP retreat January 26, 2017 from Twitter

There is no doubt that we will have to continue to engage in struggles on many fronts in the days, weeks and years ahead. Daily Executive Orders, Trump’s nominees and the plans put forth by Paul Ryan show that the movement will have to stop a lot of damage being planned by Trumpism.

Right from the start, the Trump administration made it clear where they stand on critical issues. The White House website expresses intolerance for dissent and praises the military and police. It says, “The dangerous anti-police atmosphere in America is wrong. The Trump Administration will end it.” This presents a clear threat to all protesters, but appears to be specifically directed at Black Lives Matter and other movements for police accountability and justice system reform.

Trump has declared a war on the media. It isn’t only the administration’s outright lies, which is actually not unusual from the White House, but also their refusal to answer reporters questions. And journalists are being arrested for  covering protests and are being given felony charges. 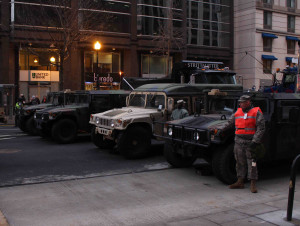 Trump loves the military. He wanted to have tanks and missile launchers in the Inauguration Parade, but the Pentagon refused. He told the Washington Post that there will be military parades in Washington, DC and New York City. If this glorification of militarism happens, let’s make sure that either nobody shows up or there are more antiwar protesters than spectators. Think of the great antiwar protest images that could be a message to the world other than Trump’s effort to glorify the military.

The Trump administration is also cracking down on federal agencies, freezing their hiring and funding and even banning information about climate change on federal websites and the use of social media. In response, federal workers are using social media anonymously and scientists are organizing a “Scientists March on Washington” to say “There are certain things that we accept as facts with no alternatives. The Earth is becoming warmer due to human action…” 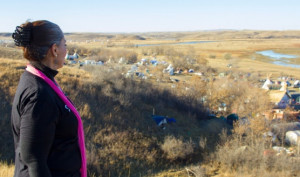 When it comes to dealing with the climate crisis, President Trump is driving in the wrong direction. The White House released a memorandum calling for the Dakota Access and Keystone XL Pipelines to be expedited. As the tribal council called for protesters to leave Standing Rock, the local police and national guard became more aggressive by stepping onto tribal territory and attacking media with rubber bullets. LaDonna Brave Bull Allard, a founder of the camp,along with others  is refusing to retreat and is going ahead with plans to build a green energy camp on her property. Students escalated their resistance to fossil fuels this week by walking out of class nationwide to encourage further divestment. 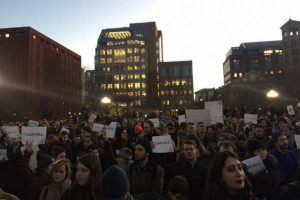 The Trump administration is going after sanctuary cities to strong arm them into enforcing deportations. This sparked a huge rally in protest at Washington Square Park in New York City. So far, elected officials say they will not comply.

It is a positive sign to see so many people rising up in resistance and supporting each other. History teaches us that creating social transformation requires a broad movement that reflects the national consensus on the changes that people support. The power structure is held up by various pillars such as youth, workers, civil servants, employers, churches, the media, police, the military and more. An effective mass movement will draw people from those pillars into the movement, thereby weakening the power structure. When a mass movement is united against the power elites it is unstoppable.

It is critical in this time to resist the attacks on our rights to protest, on our communities and communities all around the world, but it is also just as important that we build new systems to meet our basic needs and bring transformative changes.

Chris Hedges writes this week that we must revolt to stop the rise of  fascism. “Our only hope now is an unwavering noncooperation with the systems of corporate control. We must rebuild … democratic institutions from the ground up. We must not be seduced into trusting the power elites….” 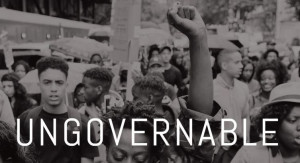 While revolt is necessary it is not sufficient. The power of the movement must be focused on creating change. Kali Akuno and Doug Norberg admonish us that a united movement is not enough, if it does not work for revolutionary changes. They write, “We have to counter the narrowness of the standard ‘united front’ approach and build a political force and a social movement that aims for social and economic emancipation, and not just a restoration of the ‘good ole bad days’ of the Obama era or the 1950’s and 60’s.”

George Lakey of Waging Nonviolence similarly advises us that going on the defense is not enough. The Democrats would be content to let there be no positive changes in the next two to four years and hope that they regain power. While Senator Sanders calls his followers to defend the Affordable Care Act now and work for a National Improved Medicare for All (single payer health system) later, we agree with Lakey, who says, “Instead of defending Obamacare, let’s push for an even more comprehensive health solution, like Medicare for all.” We cannot delay health justice when almost thirty million people are without health insurance and tens of thousands are dying as a result of that every year. 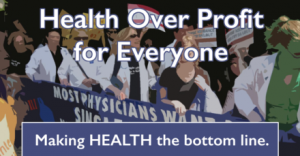 Popular Resistance is launching a new campaign for National Improved Medicare for All (NIMA) next week called Health Over Profit for Everyone (HOPE). We have been active in this struggle before, particularly in 2009-10 when we formed the Mobilization for Healthcare Reform. We believe that this is the time to fight for a healthcare system that has health for everyone as the bottom line, not the profits of a few. And we are joined by a strong team of advocates. Advocates from other movements are also pushing for National Improved Medicare for All (NIMA), such as Mariame Kabe of Project NIA, which works to end youth incarceration. Like our more than five year campaign to stop the Trans-Pacific Partnership, this is a long term campaign. We know NIMA is the only practical solution to the US health crisis, now our task is to make it the only political solution. Any politician opposed to NIMA needs to pay a political price. 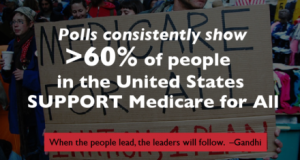 The Health Over Profit for Everyone campaign will provide tools, educational and organizing calls and coordinated days of action to shift the political culture so that the only politically viable solution to the healthcare crisis is NIMA.

The new Health Over Profits for Everyone campaign strikes at the heart of a corrupt system. When we put in place this single payer system we will be defeating corporate-domination of government and the corruption that is rife in the two parties. We will transform from the selfish ethic of profit even if it costs tens of thousands of lives to working together as a community for the good of each of us. We will be defeating the false idolatry of privatization and recognizing their are public goods that are essential for all. And with that transformation, we are taking a large step toward shifting to an economy and societal structure that values people and protection of the planet over the profit of a few.