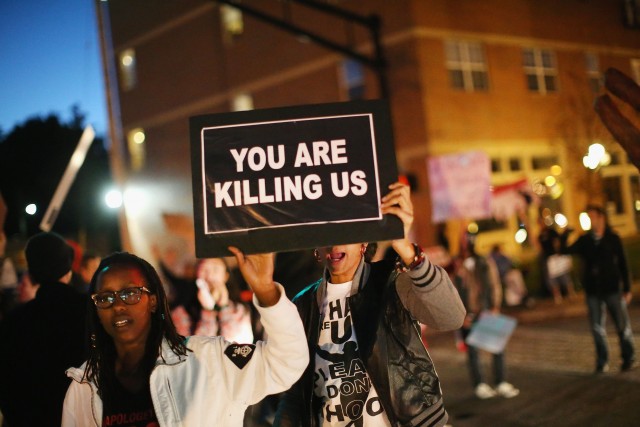 Newsletter: US Racism Is Killing Us

This was a traumatic week. Two more unjustified killings of black men were caught on video and shared widely. Mass protests erupted throughout the country. And then, at the end of a Dallas protest against police violence, a lone gunman shot 12 people, killing five police officers.

A  graphic video shows Baton Rouge police shooting Alton Sterling outside of a convenience store where he was selling CDs. Two police have him on the ground, then shots ring out and Sterling is dead. Forty-eight hours later in Minnesota, Philando Castile is shot dead at a traffic stop while he is reaching for his wallet. In the aftermath of  Castile’s fatal shooting, a video made by his girlfriend from the passenger seat is posted on Facebook and goes viral.

Police violence is a growing public heath threat that is wounding, traumatizing and killing people. This is part of a long history going back to the 1793 Fugitive Slave Act where police forces were developed to capture slaves who tried to escape. As Kai Wright notes “no generation of black Americans has been spared the macabre tradition of drilling into its children tips for avoiding death at the hands of the state.”

This week there were protests across the United States, from coast-to-coast, not only in Minnesota and Louisiana but in Washington, DC, San Francisco, Oakland, New York City, Ferguson, Atlanta, Jackson, MS, Baltimore and Dallas — because there is a nationwide epidemic of police violence against people of color and people who are considered to be vulnerable.

At the end of the Dallas protest, shots rang out, a sniper was shooting at the crowd. The first person hit was an independent journalist near the front of the march. The protesters thought they were the targets, but then it became clear — the police were the targets. In the end, 12 police officers and two other people had been shot and five officers died.

While there were initial reports of multiple gunmen, the shooter, Micah X. Johnson, was actually moving around to make it look that way. In reality, it was only 25 year old Johnson, who had military training from serving in the US Army in Afghanistan and had been discharged for some unspecified sexual misconduct. He was not affiliated with any organization. The police shootings of African Americans had affected him. He had a deep hatred for white police officers and set out to kill as many as he could. He also told police he was “upset with Black Lives Matter.”

After the shooting, Johnson was trapped in a garage where police negotiated with him for hours. Police report that the negotiations broke down and that Johnson started firing shots again, so they armed a robot made by Northrup Grumman with a bomb and blew him up. This action brings drone warfare techniques home and starts a slippery slope. Police report that they had no other option, but there is always the option of waiting someone out, at least that is probably what police would have done if they didn’t have such easy access to military equipment.

Black Lives Matter immediately condemned the  violence against the police describing it as “a tragedy–both for those who have been impacted by yesterday’s attack and for our democracy.” They criticized those who were trying to use these killings to “stifle a movement for change and quicken the demise of a vibrant discourse on the human rights of Black Americans.” And, concluded saying:

“Black activists have raised the call for an end to violence, not an escalation of it. Yesterday’s attack was the result of the actions of a lone gunman. To assign the actions of one person to an entire movement is dangerous and irresponsible. We continue our efforts to bring about a better world for all of us.”

In Dallas, the police and protesters worked well together  before, during and after the shooting. They planned the march together and the march was completed in a peaceful manner. The organizers issued a statement saying the group “does not condone violence against any human being, and we condemn anyone who wants to commit violence.” When the shooting began police pointed guns at the protesters, but the protesters pointed up toward the garage where the shooting was coming from. Some threw their bodies on children to protect them, including Shetamia Taylor, a black mother of four,  who was shot in the leg when she did so. One protester, described as a “person of interest” turned his gun in to police to show he was not involved in the shooting.

Here are two facts to put this in some context: in 2016 police are on a pace to shoot more people then they did in 2015.  There were 990 police shootings last year and by the end of June there were already 488 this year (20 more than last year at this time). Despite the murders in Dallas, Radley Balko writes in the Washington Post, that there is no war on cops: “So far, 2015 is on pace to see 35 felonious killings of police officers. If that pace holds, this year would end with the second lowest number of murdered cops in decades.”

Ending Police and Other Forms of Violence

African Americans have been mistreated since before they were forced to come to colonial America as slaves. Five million or more people died just from the slave trade. Since then the mistreatment has continued not only through physical violence, but also through economic violence and the social violence of gentrification and other discriminatory programs.

The city of Baltimore, MD is preparing to give a $535 million tax break to Under Armour to build a “new downtown” on the waterfront while many black neighborhoods are suffering from decades of disinvestment and a serious lack of affordable housing. In Uniontown, AL, a low-income black community that fought to prevent a coal ash dump from being built there was hit with a $30 million lawsuit by the corporation that poisoned their town. And in Austin, TX, a judge ordered a prison to provide water that is not poisoned with high levels of arsenic to prisoners, and the prison is refusing to comply. These are just recent stories. This type of racism is happening all over and has been for hundreds of years.

Redditt Hudson, a retired black police officer, describes the reality of racist policing. He writes that 15% of police officers will do the right thing no matter what, 15% will abuse their power for racist and other reasons and the remaining 70% will be determined by the police culture they work in. Commanders who do not hold police accountable for abuse, or even condone it, encourage bad behavior. And, those 15% of officers who abuse people have out-sized power over the police culture because  they often  find support for their actions from ranking officers and police unions. This police culture not only impacts white officers but also draws in black officers. Then, US culture puts police on a pedestal: the media will report the police narrative as fact and judges accept what police testify to as being true. The overall US culture aids police who abuse their power.

In an interview on The Real News, historian and author Gerald Horne descibed how it is not just the police culture that is the problem saying:  “It’s the culture of the society itself. The police department as an institution only exists to serve and protect, in the first place, the ruling elements of the society. And they therefore reflect the ruling elements of society.” This has always been the case. The US needs to face up to its historical foundations of slavery and eradication of Indigenous Peoples as a first step toward resolving police violence today. When we do so we will see the deep roots of police violence in the slave patrols, the first police, who enforced slavery on behalf of the slave owners, the ruling class of that era.

Feisal G. Mohamed focuses on the segregated nature of the United States as a key cause of police violence. Within cities, even within neighborhoods, whites and blacks live segregated lives and the job of police is to enforce that segregtion. This is why police feel like an occupying force to black communities.  Once we face the reality of segregation, then the reality of police violence becomes evident. He writes “we cannot reasonably expect police to do the dirty work of twenty-first century segregation without also expecting them to commit routine acts of violence against minorities.” People have a racialized view of what constitutes a “desirable” neighborhood with “good” schools and “safe” streets and the police are there to enforce those views.

Making Progress, But More To Do

Mohamed praises Black Lives Matter for opening up a deep conversation on race issues, bringing to the fore the issue of police violence against blacks. Black Lives Matter began three years ago in July of 2013 around the death of Trayvon Martin. Since that time a lot has happened but the bottom line is much more has to happen to change the lives of black people in the United States.

Alicia Garza, one of the three women who founded Back Lives Matter, reflected on where the movement is in a recent interview with Sonali Kolhatkar. Garza recognizes that a cultural shift is moving through the country on police violence and related issues and that this is essential for real change to occur. Many people are now grappling with the deep history of racism in the United States. More people are recognizing the reality of police violence and an unfair economy for blacks.

It is becoming impossible to deny the reality of racism and its impacts. But Garza also recognizes that very few police are held accountable, fewer are prosecuted and fewer are convicted of a serious crime. As a result, on a practical level little has changed. It is going to take more than a few reforms – cameras or an occasional prosecution – to create the change we need in order to provide blacks with the dignity and humanity all deserve.

It is critical that we recognize the crisis at hand and work together to make systemic changes that  not only end racist policing, but also address the disparities in wealth and the treatment of people of color. Systemic racism is a public health emergency that impacts all of us, but it is also a disease with a cure. When black lives matter, we will all be safer.