Newsletter – Which Vision For The Future?

The Trump Administration is trying to take decades of the United States’ neo-liberal (or neo-feudal for those who prefer that term) and militaristic policies to the extreme. Trump’s proposed budget would sacrifice low-cost, but critically necessary services such as legal aid, food for the elderly and programs to end homelessness, to pay for a $54 billion increase in Pentagon spending. And much of what is not being jettisoned would be privatized to offload costs from the government to individuals.

The vision for the future laid out in President Trump’s budget is one of large cuts to the federal government for necessary agencies such as the Environmental Protection Agency and Housing and Urban Development, privatization of services, such as air traffic control, and macho military might. It conjures visions of Nero fiddling as Rome burned.

If Trump’s vision proceeds, the profiteers will continue to reap great wealth while the quality of life for more people will deteriorate. The Military Industrial Complex will swell, driving the economic draft that propels more people, particularly youth, into working for either the military or security states, which creates a destructive cycle of more insecurity and the need for more weapons, war, and austerity.

This contradicts the vision Trump laid out for his voters of being a populist who had their best interests at heart. Jobs, at least those that people want and that pay a living wage, will not ‘trickle down.’ More people will lose access to health care and other safety net services. Climate chaos and war will bring greater insecurity to the world.

Ralph Nader writes in “‘Making America Great’ at American’s Expense,” that “The tower of contradictions, being constructed by Trump and the most extreme Republican Party in its history, won’t be camouflaged or distracted for long.” People are rising up and will continue to do so.

The corporatist’s vision has been pushed for decades in the US and around the world, but there is another vision that is also growing in the hearts and minds of many. It is the vision of thriving healthy communities in which everyone has health care, high quality education, jobs with living wages, a clean environment, safe neighborhoods and efficient transportation. This may sound like a utopia, but it exists in some places and it is certainly achievable in the ‘richest country in the world’.

How do we get there? The simple answer is that we must change the political culture so that these solutions are the only ones that are acceptable. We’ve seen time and again that when people lead, the leaders follow. The late activist Bill Moyer called this ‘Victorious Retreat’ and it happens when politicians face a choice of either adopting the people’s demands or losing their position (click here to read about the eight stages of successful social movements). It’s why we need a positive agenda, a People’s Agenda (as we lay out here) now more than ever.

It isn’t sufficient to be fighting against everything. People are inspired when they are fighting for something. And as more people see that there is a vision that will improve their lives too, they will join in and then we have a mass movement capable of real transformation.

George Lakey recently reviewed the new book “Strangers in Their Own Land ” by Arlie Russell Hochschilds. The author spent time in a deeply Republican area in the South to learn about middle and working-class people’s attitudes in order to better understand how to reach out to them. She found that this requires avoiding conflicts over individual policies and instead getting down to values and a vision defined by those values, and then letting the solutions flow from there.

Countries that are living the ‘American values’ of freedom, liberty and economic well-being are those that eschewed ‘welfare’ programs for universal programs. Welfare programs are often of poor quality because they are designed for the poor and those who don’t need them are generally unaware of or are not concerned about the poor quality. When basic necessities such as education, health care and transportation are available to and are used by everyone, then they are of higher quality. Sheila Kennedy explains in Inequality.org that we need to broaden our definition of the social safety net and view it as our membership in society:

“The true safety net consists of the many institutionalized avenues within which the citizens of a nation encounter each other as civic equals, and benefit from membership in a society built upon the recognition that all their lives matter.”

What could be more basic than access to health care?

The American Health Care Act (AHCA) introduced by Republican leadership in the House has made it through the three required committees and may be presented for a vote on the floor of the House next week. If it passes, it will then head to the Senate for debate and a vote. This is a bill to repeal parts of the Affordable Care Act (ACA) and replace it with tax cuts for the wealthy, cuts to Medicaid and Medicare and changes to private health insurance that will make it hard for many to afford to buy a plan, other than cheap skimpy ones.

The Congressional Budget Office released their report on the AHCA. They find that it will cut $1.2 trillion from Medicaid and subsidies for private insurance and  repeal $900 billion in taxes for the rich over the next ten years. It will leave 14 million more people without health insurance in 2018, bringing the total to 43 million, and raise the number of uninsured to 52 million in 2026. Those with private insurance will still face high premiums and out-of-pocket costs that leave many unable to afford necessary care.

The AHCA must be stopped, of course, but we also have to fight for something more. Most people in the United States support National Improved Medicare for All, also called single payer healthcare, though you wouldn’t know that if you only followed commercial media. Fairness and Accuracy in Reporting (FAIR) found that the healthcare debate in the US is being constricted to the ACA or the AHCA. Ellen Brown of Web of Debt explains why National Improved Medicare for All is the best solution to our healthcare crisis.

This past weekend, more than 200 medical students gathered in Philadelphia, PA to strategize to win Medicare for All. They are encouraging their colleagues to pledge support for Medicare for All. And Dr. Carol Paris, the current president of Physicians for a National Health Program and a steering committee member for our campaign Health Over Profit for Everyone, found a way to get the message out this week. After two letters to President Trump asking for a meeting received no response, she attended the Trump Rally in her home town of Nashville, TN. When President Trump was speaking, she held up a sign and shouted “Put your name on the bill, Medicare for All” repeatedly until she was escorted out. This caused Trump to acknowledge her and even turn his back to the audience for a moment.

There is legislation in the House of Representatives, HR 676: The Expanded and Improved Medicare for All Act that already has 69 co-sponsors. Activists successfully convinced a few more members to sign on during the recent town halls. More co-sponsors are needed and those members of Congress who say they support it must be pushed to do more. A companion bill is also needed in the Senate. Use this simple tool to call Senator Sanders (it only takes a few minutes) and urge him to introduce single payer and to offer it as a substitution amendment to the AHCA if it comes to the Senate for a vote. And then join the Health Over Profit for Everyone campaign. We hold regular national educational and organizing calls and there is a Lobby Day and a week of action from April 3 to 7.

Imagine a different future than the one we face now

There is majority support across the country for positive solutions to the crises we face. We can have a different future than the one we face if we are willing to organize and fight for it. First, we have to recognize that the changes we need are only going to come about if we are willing to fight for them and second, that we have the power to win when we do. It is our job to demand what we need and not let the bi-partisans, both corrupted by corporate influence, limit our choices.

Sometimes we even have to push those who ought to be natural allies. Bruce Dixon of Black Agenda Report writes about Our Revolution’s support for a less-than-revolutionary candidate in Georgia. Dixon correctly points out:

“Revolutionaries set lofty goals that some deem achievable, and that their foes declare illegitimate. If politics is the art of the possible, politicians and political organizations who deem opposing war and militarism, fighting for Medicare for all impractical and impossible are peddling a politics of uselessness, in which the people’s needs cannot be satisfied, a politics where peace, jobs and justice are impossible.”

We are revolutionary. We recognize that our job is to make the impossible inevitable. As people who support a livable future, we must set a vision that speaks to our shared values and then do what it takes to make that vision a reality. Across the country and around the world, people are taking action in many ways. Let’s keep building our movement of movements until we achieve the power to make our efforts unstoppable.

Popular Resistance relies on our readers for financial support. We bring you daily movement news, analysis and resources without advertising. When we asked for your support last fall, you answered and we deeply appreciate your generosity. Now, we need to ask again. We need to raise $25,000 to make it through the next few months. If you are able, please make a tax-deductible donation today. CLICK HERE TO DONATE. Thank you. 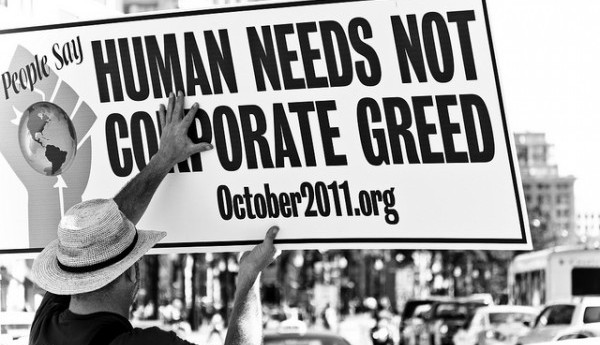