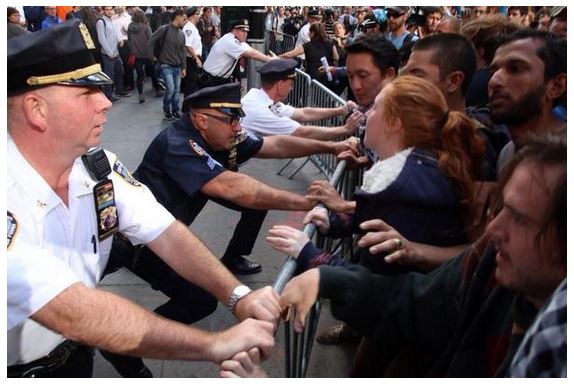 Newsletter: We Will Not Back Down

This week we focus on the grim reality that government agencies and corporations work together to exploit people and planet and suppress dissent. This knowledge can be overwhelming at times to those who are striving for a more peaceful and just world, especially for those who are labeled as ‘terrorists’ by the ones who are violent.

In this work, our hearts are fortified by the love demonstrated in activist communities, by the growing number of communities who are standing up to the security state and corporate domination and by the tangible victories occurring each week.

They seek to crush dissent because they are afraid

In “Seven Lessons From How Police Crushed Occupy,” FOIA documents revealed the deep collaboration between federal agencies, even the military, and corporations prior to and during the ‘occupy phase’ of the movement for social, economic and environmental justice. Peaceful protesters were labeled as terrorists and agents infiltrated occupy meetings from coast to coast.

To peaceful activists, the amount of resources spent on surveillance and policing seems ridiculous. It shows the fear of the elites. This fear and over-reaction continues. New York Police Commissioner Bratton just announced a new force under the terrorism unit that will respond to protests. Initially this force was going to be armed with machine guns, but Bratton seems to have backed down from that. Bratton is also pushing to make it a felony to resist arrest, knowing how resisting arrest is misused by police, this would lead to serious abuse.

Fear explains the attempts to silence political prisoners like Mumia abu-Jamal through a new law and rap artists like Brandon Duncan who is facing life in prison, because of an obscure law, for lyrics even though he committed no crime.

The security state has little regard for human rights. Sister Megan Rice, 84 years old, describes the horrible conditions she is experiencing in jail. John Kiriakou, a whistleblower on CIA torture who was recently released, tells of the abusive treatment of inmates with medical conditions. Supporters are being asked to attend a hearing on February 17 for the Dallas 6, inmates in Pennsylvania who peacefully protested their abusive treatment in solitary confinement.

Where will this stop? In Egypt, 230 activists were sentenced to life in prison, and although TV reporter Peter Greste was released from jail after 400 days, his two colleagues remain. We must stand together to expose and protest these injustices to prevent their expansion. As Chris Hedges wrote this week, Malcolm X understood that the oppressors do not have a conscience. It is up to us to stop them.

The biggest polluter you may not have heard of

There is a low-profile agency in Washington, DC, the Federal Energy Regulatory Commission (FERC), which is a rubber stamp for the oil and gas industry. According to one of the commissioners, the FERC “is not in the habit of denying permits” for oil and gas infrastructure; even when families and communities are put at risk.

FERC approved a permit for storage of liquefied propane gas in a salt cavern in upstate New York, saying it was safe even though the community has proof that there are structural reasons that it is hazardous. Community resistance to the project by a the coalition We Are Seneca Lake is growing.

This week, a Maryland teacher scaled a 150 foot crane of a dangerous gas refinery and export plant that is being built in the residential community of Cove Point. This is the first such facility to be placed in a densely populated area and several groups are suing the FERC to stop construction. The town of Deerfield, MA is also suing FERC over a gas pipeline that will require the taking of private land using eminent domain.And resistance played a role in causing the FERC to delay its report on a pipeline in the Northeast.

The Beyond Extreme Energy (BXE) coalition is focusing attention on FERC. Last November, BXE shut the FERC down five days in a row and last month they shut down a public meeting of the commissioners. FERC is starting to feel the heat and is panicking. When BXE activist, Ted Glick, attended a meeting to which he was invited this week, FERC security had him removed from the building. After their action was publicized FERC backed down, knowing they were probably acting illegally. More actions are planned at FERC this spring.

Even though it is known that the oil and gas industry works with law enforcement to spy on environmental activists and some are labeled as ‘eco-terrorists’, the fight to stop fossil fuel infrastructure is growing. Just this week, we posted articles on opposition to pipelines in West Virginia, New Jersey, Virginia, and Ottawa, Canada.

Pipelines are one of the reasons that there will be protests across Canada on February 13, known as #ShutDownCanada. This is also the Global Day of Divestment. People are demanding that we end the fossil fuel era and move to 100% renewable energy sources. This town in Germany is using solar to create four times the amount of energy they use.

Dahr Jamail wrote a powerful piece called “Mourning our Planet,” which includes letters by climate scientists who recognize very acutely the severity of the crises we face. Jamail quotes Joanna Macy, a scholar of Buddhism and eco-philosophy, who says that in order to continue in our work, we must express our feelings so that we can see reality without becoming emotionally numb.

This week, Chairman Tom Wheeler announced that the FCC will vote on reclassification of the Internet as a common carrier under Title II on February 26. This has been an amazing come from behind victory. Dominic Rushe of the Guardian describes the powerful contribution that Kevin Zeese and other activists made to achieving net neutrality.

Our next victory needs to be stopping Fast Track and the Trans-Pacific Partnership. Legislation is expected to be introduced at the end of this month. The importance of stopping Fast Track cannot be overstated. It will give seven years for transnational corporations and the US government to cement corporate control over the economy and governments of the world. The damage will be devastating.

We are forming a rapid response team to mobilize as needed. You can learn more this Wednesday on the first Green Shadow Cabinet open meeting. Click here for more information and to register.

Opposition to the Atlantic version of the agreement (TTIP) is strong in Europe. Hundreds of people turned out to protest recent negotiations in Brussels. They brought a giant Trojan horse to highlight the secrecy and hidden threats to democracy. Recent leaks show that there are provisions in TTIP that will allow strong corporate input into any new laws. Fortunately for the people of all countries involved in TTIP, the new government of Greece led by a leftist party, Syriza, stated that it will not ratify the TTIP which will prevent it from becoming law.

The rise of Syriza in Greece and Podemos in Spain, coupled with severe austerity in the EU, has some people anticipating a European Spring. Let’s hope that we see continue growth of resistance. Though the pushback may be great, this is our path forward to stopping the machine and creating a new world.

When you see the power structure stiffen its back and get abusive, remember that is because we are building power – and they fear the people having power. This is the time to escalate and show them that we will not back down.