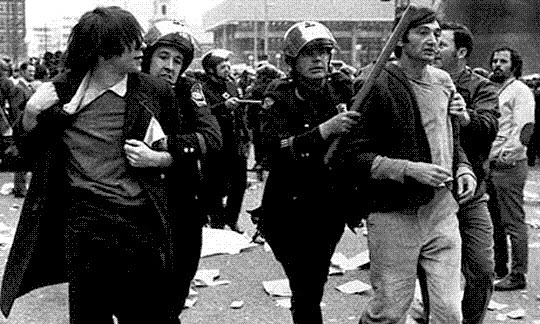 Newsletter: What Would Zinn Do?

Above: Howard Zinn, right, being arrested at an anti-Vietnam war demonstration in the 1960s.

This week marks the fifth anniversary of the death of Howard Zinn who is best known for his “People’s History of the United States” which looks at history from the bottom up, through the lenses of classism, racism and sexism.

Bill Bigelow writes about Zinn’s concerns about nationalism, American exceptionalism and militarism. Zinn said that patriotism does not mean blind obedience to government because that is “the definition of patriotism in a totalitarian state.”

Zinn believed it was essential for students to learn the true history of the US so that they could question and debate whether they want to stay on that same path. Those in power work to hide this true history and to foster obedience without questioning so that the machine of American empire continues to run.

We remember Zinn for the advice he gave activists a year before his death. When he was asked what should people be doing, he gave advice that is good no matter what the era:

CODEPINK exposed truth this week in Congress when they attempted a citizen’s arrest of Henry Kissinger who was testifying before the Senate Armed Services Committee. Kissinger is responsible for hideous war crimes in Chile, Vietnam, Cambodia, Laos and East Timor. Senator McCain who chairs the committee called CODEPINK “low life scum” and the audience obediently applauded Kissinger in a display of the topsy-turvy world we live in where war criminals are heroes.

The current film, “American Sniper,” is a propaganda piece that is being used to glorify war and murder which will draw our youth into the military. Fortunately there are former snipers like Garett Reppenhagen who tell students the truth that there is no glory in taking another’s life, only a sense of loss. There are counter-recruitment efforts in the US by groups such as NNOMY which provides materials for people to use.

Hollywood is not the only war propaganda tool. The commercial media, in particular the New York Times, feeds a narrow one-sided narrative of US foreign policy. Robert Parry dissected the NYT coverage of the situation in Ukraine including its lack of historical context.

The broader view of the crises in Ukraine and Russia requires looking at the role of US involvement and the expansion of NATO. For more information, we recommend these articles by Andrew Coburn, Diana Johnstone and William Boardman. Johnstone has an excellent analysis of how Ukraine is being used to further antagonize Russia. She writes:

“NATO leaders are currently acting out a deliberate charade in Europe, designed to reconstruct an Iron Curtain between Russia and the West. With astonishing unanimity, NATO leaders feign surprise at events they planned months in advance. Events that they deliberately triggered are being misrepresented as sudden, astonishing, unjustified ‘Russian aggression’.”

Boardman explains how the US has taken control of Ukraine’s financial affairs:

“The new Ukrainian finance minister, Natalie Jaresko, is an American citizen who managed a Ukrainian-based, U.S.-created hedge fund that was charged with illegal insider trading. She also managed a CIA fund that supported ‘pro-democracy’ movements and laundered much of the $5 billion the U.S. spent supporting the Maidan protests that led to the Kiev coup in February 2014. Jaresko is a big fan of austerity for people in troubled economies.”

And what is behind this charade? Corporate interests as usual. The Oakland Institute outlines the ways that corporations like DuPont, Monsanto and Cargill are profiteering in Ukraine by acquiring land and decreasing regulations and corporate taxes. And of course it is also about oil. A few months after the 2014 coup, Joe Biden’s son Hunter and Devon Archer, a friend of the Kerry family, joined the board of the Ukrainian gas company Burisma Holdings Ltd.

Oil is often the reason for wars and aggression. This new independent study from the UK shows that foreign intervention is usually for economic gain, and “foreign intervention in a civil war is 100 times more likely when the afflicted country has high oil reserves than if it has none.”

War and the Struggle to end Fossil Fuels

Of course we’ve known for a long time that wars are fought for oil. And we know that the next wars will be over water, food and land as the climate crisis makes large areas uninhabitable. Our activities to end war, mitigate climate change and move to sustainable, renewable sources of energy are closely intertwined.

Daily we receive stories of communities that are fighting extreme energy extraction and the expansion of fossil fuel infrastructure. In Saskatchewn, the Northern Dene Trapper Alliance has been holding a checkpoint for more than two months to keep uranium and oil explorers out. In Vancouver, Rising Tide members disrupted a dinner being hosted by Kinder Morgan which is trying to build a pipeline.

The people of Forks Township in Pennsylvania are protesting a compressor station that will be used to move fracked gas. And the first watershed to sue over fracking is in Grant Township which passed a Community Bill of Rights Ordinance which recognizes the rights of nature. Communities in other states such as Kentucky and Louisiana and the UK are also fighting fracking.

There have been some recent victories. After his inauguration was disrupted by anti-fracking protests, the new Pennsylvania governor Tom Wolf banned fracking on public lands. Scotland placed a moratorium on fracking this week.

There is Another Way

Young Dine women and their supporters are walking a thousand miles this year to protest extreme energy extraction and promote alternatives. One organizer of the “Journey for Existence”, Paige Eldridge says, ““We are being told to invest in our own destruction in the name of the economy. People say we need these jobs, but we don’t. To take care of ourselves it will take a tremendous amount of work, but it is a beautiful dream and it is so possible.”

Alternatives are essential and possible. The Fight for 15 has made progress in the fight for a living wage and they have plans for more gains in 2015. Madison, WI, home of many cooperatives already, is investing $5 million to create more cooperative businesses. The work to stop trash incinerators has been very successful and is now becoming a movement for zero waste.

As the crisis of plutocracy escalates, alternative economies and political systems become imperative. Just five years ago, 388 people controlled half of the world’s wealth, but now that has declined to a mere 80 people (here are their names). Many of these people not only control the money, but they control the US government. The history of high attendance at the World Social Forum shows that there is a strong desire to build alternatives to the current neoliberal model of globalization.

In the US, the fight against neoliberal trade agreements is coming down to the wire. We’ve been working to expose and delay the Trans-Pacific Partnership (TPP) for years. Supposedly, negotiations are nearing completion and the president is asking for Congress to give him Fast Track legislation so he can finish the deal. The US Trade Ambassador Michael Froman testified in the House and Senate this past week, or we should say he testi-lied. The Popular Resistance team and allies were on hand to call him and members of Congress out for selling out our economy and democracy in this huge corporate power grab. Read our analysis here about why we must stop Fast Track and how we can do it. Go to www.StopFastTrack.com and use the easy call-in tool to contact your member of Congress.

Greek voters made a shift to a coalition of the radical left, Syriza. Greece has been treated as a debt colony with European and US financiers demanding intense austerity and the selling off (aka privatization) of public assets.  Many in Europe see the revolt in Greece as the beginning of a series of revolts against European austerity that makes the wealthy wealthier and everyone else poorer. Spain may be next to revolt at the polls.  As the revolt spreads it may threaten the existence of the European Union as people call for European-wide change.

The new Greek leader, Alexis Tsipras, started aggressively. His first meeting was with the Russian diplomat, not any European leaders. He appointed a radical academic, who called austerity “fiscal waterboarding” as finance minister, stopped two massive privatizations of a port and Greece’s biggest utility, and pledged to raise pensions and rehire fired public sector workers. Greece is on a collision course with Europe, in particular with Germany.

We are pleased to see people around the world instinctively following the advice that Howard Zinn gave to US activists. Across the world, people are facing governments corrupted by money and not representing their needs and they are fighting back.

We close with a quote from Zinn: “But remember, this power of the people on top depends on the obedience of the people below. When people stop obeying, they have no power.”

‘Low-life scum’ of the world – Unite!