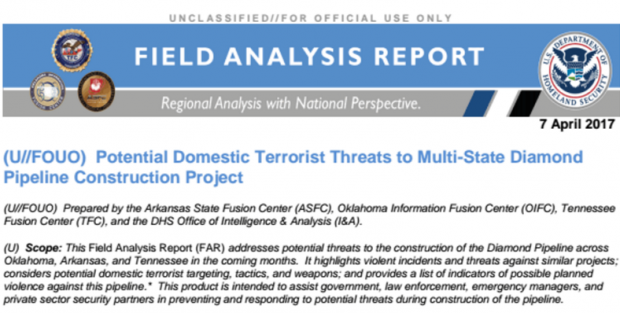 The DHS field analysis report points to lessons from policing the Dakota Access pipeline, saying they can be applied to the ongoing controversy over the Diamond pipeline, which, when complete, will stretch from Cushing, Oklahoma to Memphis, Tennessee. While lacking “credible information” of such a potential threat, DHS concluded that “the most likely potential domestic terrorist threat to the Diamond Pipeline … is from environmental rights extremists motivated by resentment over perceived environmental destruction.”

The Washington Examiner is owned by conservative billionaire Philip Anschutz, a former American Petroleum Institute board member. His company, Anschutz Exploration Corporation, is a major oil and gas driller involved in the hydraulic fracturing (“fracking”) in states such as Wyoming, Colorado, and New Mexico.

Paul Bedard, the Examiner columnist who published the document and an article about it, did not respond to repeated requests for comment from DeSmog about how he obtained it or who leaked it to him.

In his story, Bedard did not explain how he obtained the document marked “Unclassified / For Official Use Only,” and the memo is not up on the DHS website. The DHS also did not respond to multiple requests for comment, nor did Fox News 13 in Memphis, which also ran a story on the memo.

Anschutz, a major Republican Party donor, formerly owned the company Pacific Energy Partners, which was sold to Lehman Brothers and then immediately to Plains All American for $2.4 billion in 2006. The Diamond pipeline is co-owned by Valero Energy and Plains All American, which also co-owns two other pipelines, the Saddlehorn Pipeline and the Grand Mesa Pipeline, which carry the same type of oil Anschutz drills in the DJ Basin from Colorado to Cushing, Oklahoma.

In the report’s preamble, it states that “This product is intended to assist government, law enforcement, emergency managers, and private sector security partners in preventing and responding to potential threats during construction of the pipeline.” DHSalso admits in the report that its analysis is in large part based upon “open source” materials, or those collected mostly by doing online research.

“We have medium confidence in the information obtained from open sources, which includes media and NGO reports and websites whose information is credibly sourced and plausible but may contain biases or unintentional inaccuracies. When possible, open source information has been corroborated through other law enforcement and government sources.”

A major part of the report, based on information from DHS and its Fusion Centers in Oklahoma, Tennessee, and Arkansas, details other incidents identified as potential parallels for conflicts surrounding the Diamond pipeline. The Dakota Access pipeline is prominent among those featured in the analysis.

“While the Diamond Pipeline project has not seen the same level of disruption as the Dakota Access Pipeline (DAPL), we are concerned that negative perceptions about enforcement efforts against DAPL opponents could inspire like-minded individuals to seek out reprisal violence against similar targets, including the Diamond Pipeline,” the report reads.

“We have medium confidence in our assessment that potential attacks against the Diamond Pipeline or related entities would most likely be simple and designed to damage physical infrastructure or equipment by sabotage or arson. Our judgment is based on our review [of] law enforcement information, open source information, and official government reports on tactical trends in historical attacks and trends in attacks against DAPL construction efforts in 2016.”

The Diamond pipeline, set to cross through territory which includes the infamous, 19th-century forced relocation of Native American tribes known as the ”Trail of Tears,” has come under opposition by citizens in all the states it traverses. Like Dakota Access and the encampment set up at the Standing Rock Sioux Reservation, the Choctaw Nation has announced it will open a similar one called Oka Lawa Camp, situated near the town of McCurtain, Oklahoma.

Dakota Access protesters at the Standing Rock site often clashed with out-of-state police brougt in to North Dakota with heavily militarized garb and gear. Morton County Sheriff Kyle Kirchmeier, who oversaw the emergency response at Standing Rock, is now advising other states as they prepare for protests over the Keystone XL pipeline, recently approved by President Donald Trump.

The DHS report isn’t the only sign of backlash against pipeline opponents unfolding in the Sooner State.

On February 28, the Oklahoma House of Representatives passed HB 1123, which was introduced by Republican Rep. Scott Biggs and sets harsh mandatory punishments for trespassing and a list of other crimes related to “critical infrastructure.” In the most severe scenario, citizens could receive a felony sentencing, $100,000 fine, and/or 10 years in prison if their actions “willfully damage, destroy, vandalize, deface or tamper with equipment in a critical infrastructure facility.”

The bill, currently under consideration by the state Senate, defines “critical infrastructure” mostly as it pertains to oil and gas industry-related assets, including oil and gas pipelines.

Minutes before voting on the bill, Biggs — who received a $1,000 campaign contribution from Energy Transfer Partners for his successful 2016 electoral run — cited protests in other states as the impetus for the legislation.

“Across the country, we’ve seen time and time again these protests that have turned violent, these protests that have disrupted the infrastructure in those other states,” he said on the House floor, as reported by StateImpact Oklahoma, a state-level National Public Radio affiliate. “This is a preventative measure … to make sure that doesn’t happen here.”

Similarly, the Oklahoma Oil and Gas Association pointed to protests at Standing Rock as the rationale behind Biggs’ bill.

Coinciding with that bill’s passage in the House, Republican Rep. Mark McBride introduced the related bill HB 2128, which grants companies the ability to bring civil damages lawsuits in similar scenarios outlined in HB 1123. It also calls for civil liability for those paying the salaries of “paid protesters.”

McBride received a $2,500 contribution for his 2016 campaign from Continental Resources — a company whose oil flows through Dakota Access. He said his bill will help get rid of “paid protesting” from potential out-of-state activists opposing the Diamond pipeline.

“What this bill does, if you are a paid protester and you cause damage to public or private property, we will hold the person who paid you liable for the damages,” he said on the House floor minutes before his bill passed. “You can get on your computer and Google ‘paid protesters,’ there’s websites there that hook people up to paid protesting. We currently have a pipeline that [will go] through Oklahoma and they’ve already said that they’re moving people from North Dakota down here to protest that pipeline, so I think it’s something we want to be ahead of and not let it happen like in North Dakota.”

McBride also made the unsupported claim that those protesting Dakota Access were paid $3,000 per month for their activism and recevied an “arrest bonus.” Minutes after McBride’s bill passed, Arnella Karges — executive vice president of the Oklahoma Oil and Gas Association — tweeted out her thanks to him for his “work and leadership on this important issue.”

Thank you @RepMarkMcBride for your work and leadership on this important issue! https://t.co/RunAHvrJxd

The Oklahoma American Civil Liberties Union (ACLU) has come out against both bills, saying their purpose is to quell free speech and public protest.

“The First Amendment protects our right to stand in the Capitol rotunda,” Ryan Kiesel, executive director of the Oklahoma ACLU, recently told the Oklahoma Gazette. “It also protects the rights of Oklahomans and Americans to engage in speech and activity, knowing that if they engage in civil disobedience, that the penalties they face should not be disproportionate. If we chill and keep people home, away from the cameras and away from the public they are trying to wake up on any number of issues, we are doing a real disservice to our democracy.”

Similar anti-protest bills have been introduced in 19 different statehouses nationwide so far in 2017. Among those states are Tennessee, where the Diamond Pipeline terminates, and where the Senate has introduced legislation which offers civil lawsuit immunity to a “person driving an automobile who is exercising due care and injures another person who is participating in a protest or demonstration and is blocking traffic in a public right-of-way.”

“If enacted, the Bills would highly curtail the rights to freedom of opinion and peaceful assembly in ways that are incompatible with US obligations under international human rights law,” they wrote, pointing to the Oklahoma legislation as particularly problematic. “The Bills would have a chilling effect on protestors, stripping the voice of the most marginalized, who often find in the right to assemble the only alternative to express their opinions.”

“The report was crafted as a scare tactic to help deter folks from practicing their First Amendment rights and their duty as civic citizens,” said McCray. “This report and the pending legislation are just two pieces of multifarious evidence we have that show the lengths to which politicians will cater to Big Oil.”

As DeSmog reported in 2013, a DHS Fusion Center in Nebraska had similarly labeled anti-Keystone XL activists as potential eco-terrorists, based on questionable evidence. An open records request submitted to Oklahoma’s Fusion Center by DeSmog was denied on the grounds that it dealt with an ongoing investigation. Requests submitted to the Arkansas and Tennessee Fusion Centers are still pending.

DHS Fusion Centers exist as an information-sharing and intelligence-gathering network between the federal government, state-level governments, and localities. Their activities have come under fire by civil liberties advocates, with many civil liberties abuses documented in a 141-page 2012 U.S. Senate report.

The pipeline, which will cross six rivers including the Mississippi River, has received the two permits it needs from the U.S. Army Corps of Engineers and necessary state-level permits. It is currently under construction.

“We will not be deterred,” said McCray. “We will continue to move forward to raise awareness to what is happening in Oklahoma and throughout the route of the Diamond Pipeline as well as continue to create unity between the people who are being affected. We do so in a completely peaceful and prayerful manner and we will continue to counteract their spin factors and scare tactics in the same way.”