By Kevin Zeese and Margaret Flowers, Popular Resistance
October 6, 2019
| Newsletter
Next Phase Of The Battle For Net Neutrality & People’s Control Of The Internet2019-10-062019-10-08https://popularresistance-uploads.s3.amazonaws.com/uploads/2017/12/popres-shorter.pngPopularResistance.Orghttps://popularresistance-uploads.s3.amazonaws.com/uploads/2017/12/never-going-to-give-up-net-neutrality.-protesters-outside-of-ajit-pai-speech.-e1570415666144.jpg200px200px

Above: Protesters outside building where Ajit Pai was giving a speech in Washington, DC, December 2017. From Free Press.

Last week, the DC Circuit Court of Appeals finally issued a decision on a challenge to the Trump administration’s “Open Internet” rule, which ended Net Neutrality protections in 2017. While the court reversed and remanded important parts of the rule, it upheld the reversal of Net Neutrality regulations.

This decision opens the next phase of the struggle in the battle for the Internet — a battle between control of the Internet by a handful of big corporations versus an Internet that serves the people. The Internet freedom movement enters this conflict in a strong position as there is a public consensus that the Internet should be open and neutral, i.e. people should be able to go to websites without Internet Service Providers (ISPs) restricting their access. Millions of people have shown they will take action on behalf of a people’s Internet.

The movement won Net Neutrality in 2015 during the Obama administration even though the Obama-FCC, chaired by Tom Wheeler, initially opposed it. Net Neutrality supporters occupied the FCC, protested for months in DC and around the country, disrupted FCC hearings and even blocked the FCC Chair’s driveway to win strong Internet rules that included Net Neutrality. In 2017, the movement also protested Trump-Chair Ajit Pai, a former Verizon lawyer, including at his house, at public events and at the FCC. In both cases, record numbers of public comments were filed supporting Net Neutrality. Following the 2017 FCC decision to repeal Net Neutrality, the movement continued to mobilize millions in the streets and at the House of Representatives, Senate, state legislatures and in the courts. This is a movement that will not give up and that politicians do not want opposing them.

Net Neutrality protest in Baltimore. One of more than 700 held on December 7, 2017 the Internet day of action.

Court Decision Opens the Door to Building a National Movement

On October 1, 2019, the US Court of Appeals for the District of Columbia Circuit issued its decision in Mozilla Corporation vs Federal Communications Commission. It was a mixed result for the movement. The court begrudgingly upheld the central part of the FCC rule, which ended Net Neutrality.  The judges wrote they are “deeply concerned that the result is unhinged from the realities of modern broadband service.” This occurred because the reality of administrative law is that courts defer to the administrative agency as the experts.

In Mozilla, the court said the Commission “barely survives arbitrary and capricious review,” and the FCC “failed to provide any meaningful analysis” regarding how existing law will protect consumers without the agency’s Net Neutrality protections. A future FCC can reconsider the Trump FCC’s decision, but the reality is new laws are needed to develop a twenty-first-century internet. It is the movement’s job to build national consensus for the Internet we want to see. 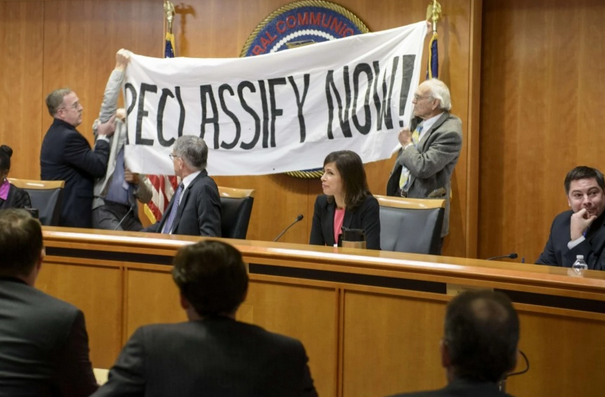 States Can Become Engines of Change for the Internet

The most important positive part of the court decision was the ruling that the FCC could not stop states from putting in place Net Neutrality rules. This opens up tremendous opportunities for the movement. Nine states have already put in place rules to protect Net Neutrality. Four states passed laws – California, Oregon, Vermont, and Washington – and 27 states have considered legislation. In six states, governors have signed executive orders requiring Net Neutrality – Hawaii, Montana, New Jersey, New York, Rhode Island, and Vermont. The potential for rapidly expanding Net Neutrality at the state level is demonstrated by 125 city mayors signing a Net Neutrality pledge promising not to do business with any ISP that violates the open-internet standard.

The Net Neutrality movement has the opportunity to build its national base as states pursue Net Neutrality legislation. If over the next few years a dozen or more states pass Net Neutrality laws, the movement will be in a strong position to insist that the FCC re-institute Net Neutrality. It is unsustainable to have a ‘patchwork’ of different state laws to regulate the Internet because that will require ISPs to change their practices depending on the state. The FCC will need to develop a national policy.

Other positive aspects of the decision are that the court directed the FCC to reconsider the impact of its order on public safety, the ISPs’ use of public rights of way (such as for installing infrastructure) and the federal Lifeline broadband-discount program. The Lifeline program makes the Internet available to low-income communities. The court showed that the FCC decision had serious negative impacts in the real world and must be reconsidered.

The Federal Communications Commission reports that 21.3 million Americans don’t have access to high-speed broadband. This is because the Internet is not affordable for many people in underserved rural and low-income urban communities. Access to the Internet has become essential for functioning in today’s world. Internet access must become a public good.

The next FCC will be able to investigate and report on the outright fraud by corporate lobbyists during the Trump-FCC rulemaking proceeding. A few days after the court decision, Buzz Feed News reported right-wing groups supporting the corporate interests of Internet Service Providers filed millions of fraudulent public comments. This undermined the public comment process and ensured the FCC did not get a true representation of public views. This will provide further justification for reconsidering the Trump rule and the next FCC can put in place safeguards to ensure a reliable public comment period, which is essential to democratic rulemaking.

This is the fourth time in just the last few months that Trump-FCC decisions have been reversed in court. This series of decisions show an FCC that makes judgments based on predetermined outcomes rather than reasoned consideration of the facts and the law. 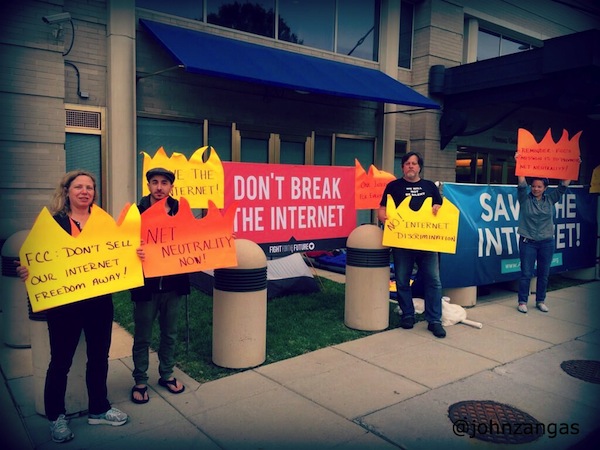 Occupation of the FCC in May 2014 kicked off a successful Net Neutrality Campaign. Source DC Media Group.

Creating an Internet for the 21st Century that Serves the People

Support for Net Neutrality comes from across the political spectrum. A poll conducted by the University of Maryland in April 2018 found 86 percent of voters opposed the FCC’s repeal of Net Neutrality, including huge majorities of Republicans (82 percent), Independents (85 percent) and Democrats (90 percent).  We must build on these extremely high levels of support.

Net Neutrality is a winning issue for elected representatives to support and a risky one for politicians to oppose.  As a result of the popularity of Net Neutrality, there is already strong political support in Congress. Before the last election, the House passed the Save the Internet Act, which would have put the open-internet rules back in place. A bipartisan majority of the U.S. Senate approved a Congressional Review Act resolution to reinstate the FCC’s 2015 Net Neutrality protections.  Neither of these efforts has made it to the President’s desk yet.

During the 2020 election season, the movement has an opportunity to demand that the next president commits to supporting strong Net Neutrality rules and broadband protections. Already, some presidential candidates are calling for Net Neutrality and putting forward their vision of the future of the Internet. The most thorough plan comes from Howie Hawkins, a Green Party candidate, who published the statement “Time for the Internet to be Controlled by the Public, Not Corporate Interests,” which not only called for Net Neutrality but also for a series of laws and policies including replacing corporate control of the Internet with a democratically-controlled Internet.

Senator Bernie Sanders, who has been a long-time proponent of net neutrality, quickly blasted the court’s decision, saying it gave more “power” to “unaccountable” internet service providers. Sanders wrote, “We must fight to keep the internet free and open—not dominated by corporations. This struggle is essential to free speech and democracy.” Senator Warren, also a long-time supporter of Net Neutrality, was an early critic of the Trump FCC rule. She added we need to”fix a corrupt system that lets giant companies like Facebook engage in illegal anti-competitive practices, stomp on consumer privacy rights, and repeatedly fumble their responsibility to protect our democracy.”

Senator Ed Markey has been the senate leader on Net Neutrality. Markey immediately said the Mozilla decision “increases the urgency of Congress to pass the Save the Internet Act and make net neutrality the law of the land once and for all.” Markey noted the power of the Internet movement saying, “Democrats and Republicans agree that we need Net Neutrality laws on the books and after today’s decision, we will undoubtedly see activists and organizers across the country push their states to enact strong Net Neutrality rules.”

It is time to insist that future FCC Commissioners represent the people’s interests and not corporate interests and to end an FCC that is corporate-occupied territory. We must urge all candidates for president and Congress to call for the restoration of the 2015 Open Internet Order in their first 100 days in office as a first step to creating an internet for the 21st Century.

The movement for Net Neutrality and a free and open Internet includes millions of people, public interest groups, civil rights organizations, and many others who have shown the Internet is an important issue for them. Successful battles against bills like SOPA and PIPA demonstrate the power of this movement.

It is time for the public to take control of the Internet. Internet technology was created with public dollars. It should serve the people’s interests and be under public control. Popular Resistance calls for the Internet to be controlled democratically by the people and not by for-profit corporations. The Internet would serve people better if it were a public utility.

To get involved in this vibrant movement, visit the Popular Resistance Internet campaign site, Protect Our Internet, and the movement’s coalition site Battle for the Net. For more information, listen to our interview with Craig Aaron of Free Press this week on Clearing the FOG.