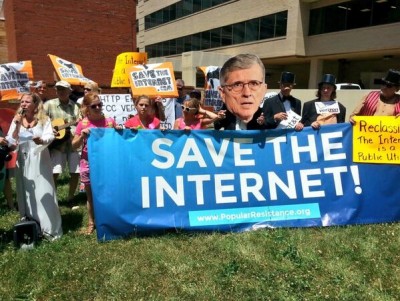 Next Step To Save The Internet: Call For Regional Hearings

Outrage! FCC Official Says a million people commenting will not make much difference.

More than a million people have spoken out in favor of real Net Neutrality in public comments. More than 3.4 million took some kind of action urging Net Neutrality before the rulemaking began. This has been the biggest public response the FCC has ever gotten on a policy matter … but is the FCC listening? Will the voices of a million people make a difference?

Sadly, a top official at the FCC, Gigi Sohn, told NPR: “A lot of these comments are one paragraph, two paragraphs, they don’t have much substance beyond, ‘we want strong Net Neutrality.” So, 1,067,779 people commenting will not make much difference.  It is a very sad commentary on democracy in the United States and on the FCC.

We have always known that, so we occupied the FCC, interrupted their meetings, protested outside of it and supported other protests – and we know that is not enough. The FCC received so many phone calls and comments that their system could not handle it.

Our protests forced the FCC to listen and include our proposal for the Internet being reclassified as a public utility in their rulemaking. But, to win we need to build a mass movement that cannot be ignored, that balances the influence of big corporations like Comcast and Verizon.

Our next step is to demand that the FCC commissioners come out of their federal building that is infected with corporate lobbyists and actually listen to the people. How do they do that? They hold hearings around the country where people have an opportunity to fully talk to the commissioners.

It’s been more than five years since all five FCC commissioners left Washington to meet with the public in an official capacity. Net Neutrality is the hottest issue the agency has dealt with in almost a decade. People like you and me have a lot to say about the open Internet and the FCC needs to hear it.

Join us in calling the FCC to hold hearings outside of Washington, DC where they hear from the people.

FCC Chairman Tom Wheeler has held closed door meetings with Internet venture capitalists, with corporations and with people in Silicon Valley.  In the one public event he has participated in he dodged questions, told people they were making assumptions about his plan and used technical jargon to avoid answering people’s concerns for real net neutrality. The event, organized by the Media Literacy Project in New Mexico, drew hundreds of people who told Wheeler they want the Internet to be a public utility where there is equal access for all.

Tom Wheeler has been saying many of the right things, but his proposal does the opposite of his rhetoric. We’ve been asking whether or not Tom Wheeler gets it or is he intentionally trying to mislead the public. Public hearings will help push Wheeler to listen to people who explain how his proposal will break the Internet.

All of the commissioners need to hear from the people and take our views seriously. One way to do that is for the FCC Commission to hold hearings across the country where people can speak face-to-face with the commission.

Join us in telling the FCC to hold hearings because they have a responsibility to listen to us on an issue which is of the utmost importance.

The movement for reclassification of the Internet as a public utility where there can be no discrimination is rapidly growing. Public outcry is putting pressure on the FCC. We need to keep growing so the people cannot be ignored. Net neutrality groups have staged rallies, musicals and even camped outside the agency’s doors. Congress is even starting to speak out with thirteen senators and 37 members of the House calling on the FCC to reclassify broadband and protect Net Neutrality. This week hundreds gathered outside fundraisers President Obama held in California to remind him of his commitment to the open Internet.

The public has a lot to say about this Net Neutrality which has become the biggest issue ever considered by the FCC.

Join us in demanding that the FCC hold hearings to listen to the people.

Kevin Zeese, JD and Margaret Flowers, MD are organizers of PopularResistance.org; they co-direct It’s Our Economy and co-host Clearing the FOG. Their twitters are @KBZeese and MFlowers8.