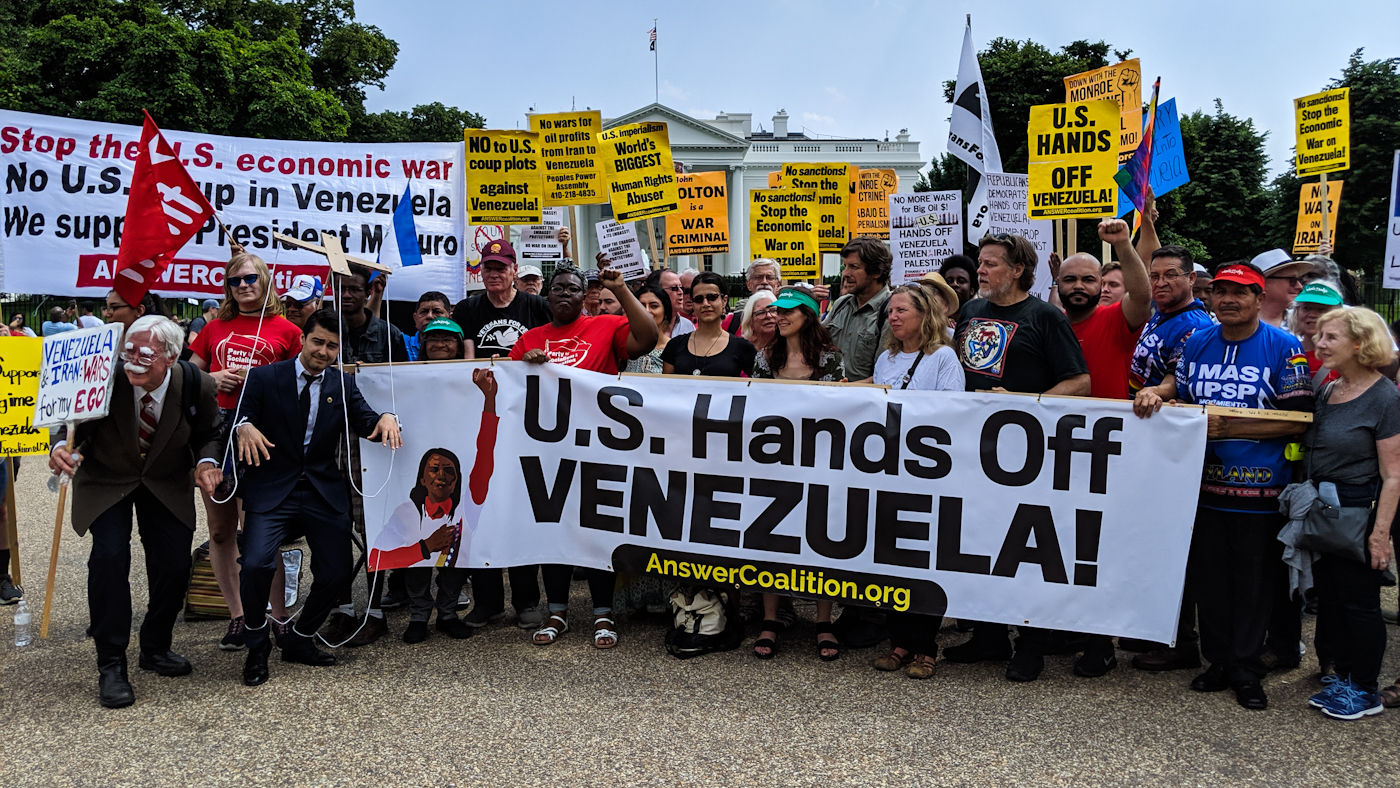 Next Stop, The UN: Embassy Protectors And Other Groups To Stage UN General Assembly Protest

Above Photo: Members of the Embassy Protection Collective rally outside the White House following the illegal seizure of the Venezuelan embassy in Washington, D.C. by U.S. authorities. Photo | Alexander Rubinstein

The Embassy Protection Collective, the activists that fought for the US to respect international law at the Venezuelan embassy, are just getting started.

WASHINGTON — Following the illegal seizure by U.S. authorities of the Venezuelan Embassy in Washington, the group of activists who lived in the building for 37 days — protecting it from such a seizure at the request of the democratically elected government of Venezuela — is escalating tactics.

In many ways, the fight of the Embassy Protection Collective revealed the extreme tactics the U.S. government is willing to resort to in order to achieve its foreign policy objectives — only in this situation they were weaponized against American citizens as opposed to foreign, usually black and brown, nations.

In Syria, the U.S. government relied on the use of jihadist proxy forces to try to oust President Bashar Al Assad from power. In an audio recording leaked to the New York Times of a meeting between Former Secretary of State John Kerry and Syrian anti-government rebels, Kerry said:

Russia is invited in by the legitimate regime… The reason Russia came in was because ISIL was getting stronger. Daesh was threatening the possibility of going to Damascus, and that’s why Russia came in: because they didn’t want a Daesh government and they supported Assad. And we know that this was growing, we were watching. We saw that Daesh was growing in strength and we thought Assad was threatened.”

In Ukraine, the U.S. bolstered neo-Nazi forces; in Libya, more jihadists; and in Venezuela the U.S. backed violent fascists.

Anthropologist and embassy protector @adriennepine talks about the devastation the US brought to Honduras with the 2009 coup pic.twitter.com/sxzyzGwWV9

In D.C., the police outsourced their tactics to a violent, racist mob that attempted to starve out the Embassy Protection Collective, a tack likely taken because, as this MintPress reporter overheard during a briefing amid a Secret Service shift change, their “arrest authority” wasn’t “certain.”

During that same briefing, one officer propagandized another, telling him that the “pro-Guaidó” mob was “essentially the U.S. government,” and that the “anti-war protesters” were “paid by Russia or whatever.”

While the police would sometimes block food from reach activists inside the embassy and sometimes allow it, depending on the situation, U.S. authorities did cut electricity from the building, a move all too reminiscent of the recent devastating blackouts that have hit Venezuela.

This weeks-long standoff, activists believe, must serve as a launch pad for a broader anti-war movement. One day after being let out of jail, Zeese vowed in front of a crowd that had just marched to the White House “We are going to defeat this coup!” The seizure of the embassy, in violation of Article 22 of the Vienna Convention, like the coup attempt in Venezuela, exposed the United States for its non-commitment to — or perhaps outright rejection of — international law and diplomatic norms.

We are gonna keep pushing that, in the court, and all the ways — in the media — to push our case for that. That’s why we and many people around us here stayed in the embassy and why we stayed as long as we did. We hope our case will be favorable. The same principle of sovereignty and international law, it can’t be taken lightly, because it will set a precedent for other embassies to be taken around the world, or our government to pick presidents for other countries.”

Embassy protector @KBZeese of @PopResistance calls for an ‘Occupy the UN’ protest, “A mass rally, at the United Nations, calling for the rule of law, restoration of international law, end of US threats against other nations, economic or military.” pic.twitter.com/tvG31Qpfbs

Bringing it to the UN

In addition to taking the battle to the courts, groups that participated in the Embassy Protection Collective — Popular Resistance, Codepink, Answer Coalition — and others are planning to hold a protest outside the United Nations before the General Assembly reconvenes on September 17. Their call to action read in part:

The violations of law by the United States must be highlighted and shown. And when we urge that kind of action, we need to do that kind of action here as well. We need in Washington, D.C. to be pressuring our government. We need to be planning on going to the United Nations when the General Assembly meets in the fall. A mass rally, at the United Nations, calling for the rule of law, restoration of international law, end of U.S. threats against other nations, economic or military.

Anti-imperialists believe that the United States maintains a system of global hegemony. For decades, the U.S. has, with impunity, been able to foment coups against countries that nationalize their resources. Major financial institutions such as the World Bank and the International Monetary Fund function as arms of American capitalism that seek to impose neoliberal shock therapy on countries that don’t play ball in this system.

The U.S. is also the world’s biggest military spender, outspending the seven countries with the next largest defense budgets combined.

Meanwhile, under President Donald Trump, the United States has withdrawn from important systems of accountability, such as the United Nations Human Rights Council and the International Criminal Court.