Above Photo: The NFL is attempting to shut down protests like this one by members of the Cleveland Browns. AP Photo/David Richard

The recent decision by the NFL regarding player protests and the national anthem has yet again exposed the fraught relationship between African-Americans and patriotism.

The controversy has taken place nearly a century after another time when African-Americans painfully grappled with questions concerning loyalty to the nation and the struggle for equal rights. 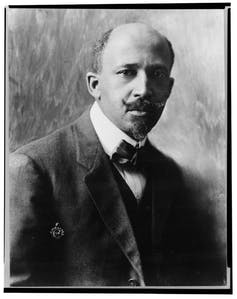 In July 1918, at the height of American participation in World War I, W. E. B. Du Bois, the acclaimed black scholar, activist and civil rights leader, penned arguably the most controversial editorial of his career, “Close Ranks.”

“Let us, while this war lasts, forget our special grievances and close our ranks shoulder to shoulder with our own white fellow citizens and the allied nations that are fighting for democracy,” he advised his fellow African-Americans. Du Bois acknowledged that this was “no ordinary sacrifice,” but black people would nevertheless make it “gladly and willingly with our eyes lifted to the hills.”

Pressured from league owners, white fans and the president of the United States, black NFL players are now faced with the dilemma of closing ranks and forgetting their “special grievances,” or continuing to protest against racial injustice.

The history of African-Americans in World War I, as I have explored in my work, offers important lessons about how to confront this challenge.

The NFL, race and the national anthem

Last season, during the playing of the national anthem, dozens of NFL players kneeled, locked arms and raised their fists in protest against police and state-sanctioned violence inflicted upon African-Americans. Their actions elicited a fierce backlash, much of it fueled by President Donald Trump, who encouraged his overwhelmingly white base of supporters to boycott the NFL so long as players, in his view, continued to disrespect the flag. Seeking to avoid further controversy, on May 23, Commissioner Roger Goddell announced that for the upcoming season, “All team and league personnel on the field shall stand and show respect for the flag and the Anthem.” Not following this directive could result in teams being fined and players subject to “appropriate discipline.”

Approximately 70 percent of the players in the NFL are African-American. They have also been the most visible faces of the national anthem protests, which began in 2016 with quarterback Colin Kaepernick, who is currently unemployed and suing owners for collusion to keep him out of the league.

I see the decision by the NFL as an unmistakable attempt to police the actions of its majority black work force, impose what amounts to a loyalty oath, and enforce through intimidation and threat a narrow definition of patriotism. The message is clear: Either demonstrate unqualified devotion to the United States or be punished.

African-Americans and World War I

African-Americans confronted the same stark choice during World War I.

In previous conflicts, African-Americans had sacrificed and shed blood for the nation. But patriotism alone has never been enough to overcome white supremacy. By 1917, as the United States prepared to enter the world war, disfranchisement, Jim Crow segregation, and racial violence had rendered African-Americans citizens in name only.

Black people thus had every reason to question the legitimacy of fighting in a war that President Woodrow Wilson declared would make the world “safe for democracy.” African-Americans immediately exposed the hypocrisy of Wilson’s words, while also seizing the opportunity to hold the United States accountable to its principles. They did this, in part, by serving in the army, as some 380,000 black soldiers labored and fought to not just win the war, but to also make democracy a reality for themselves.

African-Americans also recognized the importance of protest. Discrimination and racial violence continued throughout the war, highlighted by the East St. Louis massacre in July 1917, where white mobs killed as many as 200 black people. In response, the National Association for the Advancement of Colored People organized a Silent Protest Parade in New York City, where more than 10,000 black men, women and children peacefully marched down Fifth Avenue carrying signs, one of which read, “Patriotism and loyalty presuppose protection and liberty.”

‘Closing ranks’ and the costs

Just as it does today, protesting racial injustice during the war carried risk. The federal government wielded the repressive power of American nationalism to crush disloyalty to the United States. The Espionage Act (1917) and Sedition Act (1918) severely curtailed civil liberties by criminalizing “disloyal, profane, scurrilous, or abusive language.”

“100 percent Americanism” entailed the policing of immigrant communities, restricting freedom of the press, jailing anti-war activists, and monitoring African-Americans, including W. E. B. Du Bois, for potential radicalism. This pressure, along with the personal desire to demonstrate his loyalty to the nation, compelled Du Bois to soften his critiques of the government and issue his call for African-Americans to “close ranks.”

“The words were hardly out of my mouth when strong criticism was rained upon it,” Du Bois later remembered. Even during a time of war, most African-Americans refused to set aside the “special grievances” of segregation, lynching and systemic racial abuse. And Du Bois paid a heavy price. William Monroe Trotter, the fiery newspaper editor and civil rights leader from Boston, branded Du Bois “a rank quitter,” adding that his one-time ally had “weakened, compromised, deserted the fight.”

But African-Americans, having fought for democracy, would surely be rewarded for their loyal service and patriotic sacrifices, Du Bois reasoned.

To the contrary, they were greeted with a torrent of racial violence and bloodshed that came to be known as the “Red Summer” of 1919. White people, North and South, were determined to remind black people of their place in the nation’s racial hierarchy. Race riots erupted throughout the country and the number of African-Americans lynched skyrocketed, including several black veterans still in uniform.

The NFL’s decision is essentially an attempt to appease the mob in 2018.

Echoing the backlash following World War I, the vitriolic reactions to the national anthem protests reflect what happens when African-Americans physically and symbolically challenge an understanding of patriotism rooted in white supremacy and racist ideas of black subservience. I believe the NFL has acquiesced to the threats of President Trump and the unrest of its white fan base by establishing a policy that requires black players to remain docile, obedient employees, devoid of any outward expression of racial and political consciousness, which sole purpose is to entertain and enrich their owners.

And now, the NFL wants black players to “close ranks” by giving them the false choice between standing for the pledge or hiding their protest in the locker room, conveniently out of sight of fans in the stadium and away from television cameras.

The league ignores any mention of the “special grievances” of police brutality, racial profiling and antiblack harassment that remain alive and well. Ironically, the NFL has been the one to transform the flag into a political weapon to silence black activism, protect its corporate interests and maintain a racial status quo. Displays of patriotism and loyalty to nation are meaningless when not accompanied by the actual freedoms and protections that come with being a citizen.

W. E. B. Du Bois would spend the rest of his life questioning his decision for African Americans to “close ranks” during World War I. He ultimately recognized that until America reckoned with its racist history and embraced the humanity of black people, the nation would remain deeply wounded. At the age of 90, reflecting on the questions that shaped his decades of struggle, Du Bois pondered, “How far can love for my oppressed race accord with love for the oppressing country? And when these loyalties diverge, where shall my soul find refuge?”

Like the battlefields of France 100 years ago, the football fields of NFL stadiums are just one place where African-Americans have historically sought to answer these questions. And simply closing ranks has never been sufficient. In this moment of racial repression and moral mendacity, when the ideals of democracy are undermined daily, the debate over national anthem protests reminds us that the fight to affirm the sanctity of black life is much longer and deeper than a Sunday afternoon game.