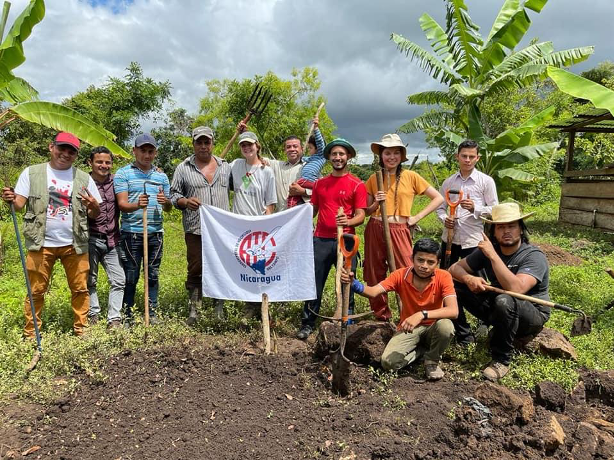 Without Farming And Art, There Is No Revolution

Above Photo: Members of the 2021 Friends of the ATC Agri-Cultural Brigade and their Nicaraguan hosts gather for a final picture before leaving the countryside to return to the city.

As the 2021 Friends of ATC Agri-Cultural brigade comes to an end, participating members including myself return to our lives with a shifted perspective, a stronger understanding of Nicaragua and its struggle, culture and people, as well as hope and inspiration.

Like-minded individuals from the United States, Mexico, Japan, Hong Kong, Borinquen, Dominican Republic, Honduras and Nicaragua gathered together in Nicaragua from September 3-13th, 2021, to build solidarity, exchange knowledge and culture, and learn through experience — specifically in the campo (countryside) of Nicaragua through agroecology. Members of the delegation eagerly gathered in Managua first to learn the history of Nicaragua and the Sandinista Revolution, which included touring the capital city, discovering historical sites, and enjoying community offerings in Managua, such as the beautiful Luis Alfonso Velasquez Park and the Salvador Allende Port. We learned that 45% of the population in Nicaragua live in the campo, and over 90% of the food consumed in Nicaragua is produced within the country.

The following day, we split into two groups to begin our travels to the rural farming communities of Santa Julia with the Cooperative Gloria Quintanilla R. L and La Montañita community at the ATC’s agroecological demonstration plot on the Cruz family farm. Both groups had profound experiences at each location, focusing largely on discussions with community members, cultural and food exchange while also working and living the life of a campesino (peasant farmer). In La Montañita, community members shared information about government social programs and country-wide advancements since the end of the neoliberal period (1990-2006). Since the beginning of Daniel Ortega’s presidency, the country has increased access to electricity from 54% to 98.5% [now 99.1%], increased renewable energy from 25% to 75.9%, all while rolling out literacy programs, affordable housing, school nutrition programs, and de-privatizing health care and education. As I talked with community members, I noticed a heavy emphasis on the role of women and youth in their fight, reiterating their commitment to gender equality and youth activism and engagement. Not only were there insightful conversations, but learning opportunities on how to use agroecology as a means for food sovereignty and to build solidarity.

After a couple of days in each community, the groups joined together at the Latin American Agroecological Institute (IALA) to continue learning alongside campesinxs in Nicaragua and participate in hands-on work in the campo. We harvested and learned about the processing of beans, made animal feed, prepared beds for planting, milked cows, and shared knowledge with one another, while also quickly learning the hard working reality for campesinxs and their long days in the fields. While some members conducted interviews with community members in preparation for information sharing in their home countries, others helped paint a mural at IALA to represent agroecology, food sovereignty and solidarity. A passionate, artistic participant mentioned to me that “no revolution happened without art” which fueled my desire to complete the mural as a means for solidarity. We collectively acknowledged the high volume of murals and art throughout the country, with strong imagery and messages to the public about the struggles in Nicaragua.

We left IALA with full brains and full hearts, new friendships and… smelly clothes. It was time to return back to Managua to close out our brigade with more learning and sharing, but also fun. We spent our last day touring the home of Sandino in Niquinohomo, a monumental experience for many as the legacy of Sandino lives on powerfully in Nicaragua and around the world. We explored Masaya and its volcano, visited a famous market and were treated to a live music performance from Diego Aguirre, a musician well known in Nicaragua.

As the delegation came to a close, I felt overwhelmed with knowledge and new insight. We collectively learned an immense amount from the people in Nicaragua but also from one another. I noticed throughout the delegation that each member had different strengths and weaknesses, and when combining these we become stronger as we fight for the rights of the peoples of Nicaragua and also globally.

From my own observations, I noticed that the reality of campesinxs in Nicaragua is starkly different from the picture painted by mainstream, neoliberal news. Nicaraguans take pride in their country, their president, and their revolution. There are numerous existing programs that increase access to basic needs; people feel the government is there to support them.

From here, it’s up to us to spread our knowledge, challenge the norm presented by the mainstream media, and fight for the rights of workers. Overall, I would recommend this brigade as a means to educate oneself on the true realities of the people in Nicaragua and to stand in solidarity as they continue their fight.

Here are what some of the other brigadistas shared about their experience:

“It’s inspiring to be in a country that has not only had a successful revolution but has been able to overcome a coup attempt and continues to build resources for its people. Nicaragua is an example of successful anti-imperialist struggle that more people should know about.”

“I can already feel that this delegation will prove to have been one of the more transformative and inspiring times of my life. After going through the Agri-Cultural Brigade Delegation, I feel much more confident and capable than I was before: in my Spanish skills, in my ability to contribute physical labor, in my ability to adapt and try new things, and in my personal power and responsibility to be an active part of collective struggle and transformation (among others). I also made many friends and established many good connections, which is very important for our goal of international solidarity.”

Visit Nicaragua this summer with Friends of ATC (2022)

Friends of the ATC is the solidarity network with the Nicaraguan Rural Workers’ Association. The ATC is a founding member of the international social movement, La Via Campesina. We invite you to join this historic organization in revolutionary Nicaragua in these upcoming summer opportunities! Full information can be found on the Friends of ATC website. Limited scholarships available through the Ben Linder Scholarship Fund (for more information, please write info.friendsatc@gmail.com) 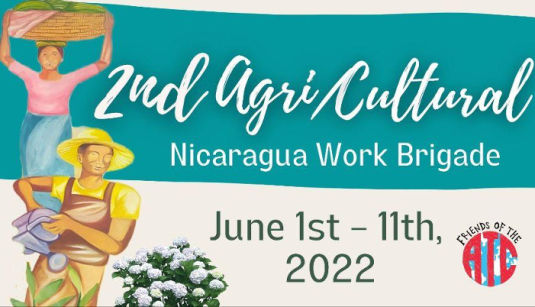 Join us for the 2nd Agri-Cultural Work Brigade in Nicaragua which will make contributions in two significant areas of the Sandinista Revolution: culture and agriculture. In addition to studying the history of art, theater, music, agrarian reform, and farming, all grounded in the Sandinista Popular Revolution, delegates will get to work. There will be opportunities to contribute to ATC agroecological farms, and work on a collective art project to be announced. Come make music, art, and grow food with us! 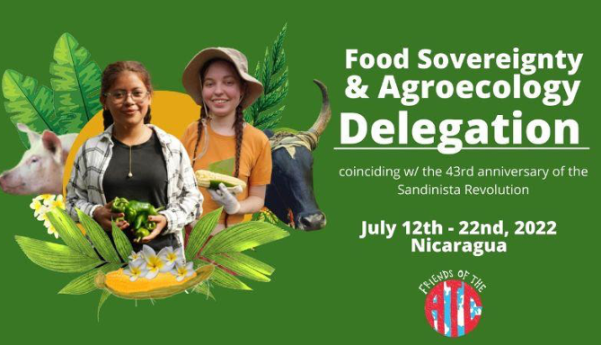 This delegation is an introduction into Nicaragua’s efforts to achieve food sovereignty through the experiences of the ATC. The delegation will visit local agroecological farms and rural communities growing food for the nation. Delegates will also have a chance to exchange with different popular sectors of society in order to understand Nicaragua’s current context and struggle against US imperialism. This delegation will conclude celebrating the 43rd anniversary of the Sandinista Popular Revolution.

Applications due: Wednesday, May 12th, 2022 (email info.friendsatc@gmail.com for application)