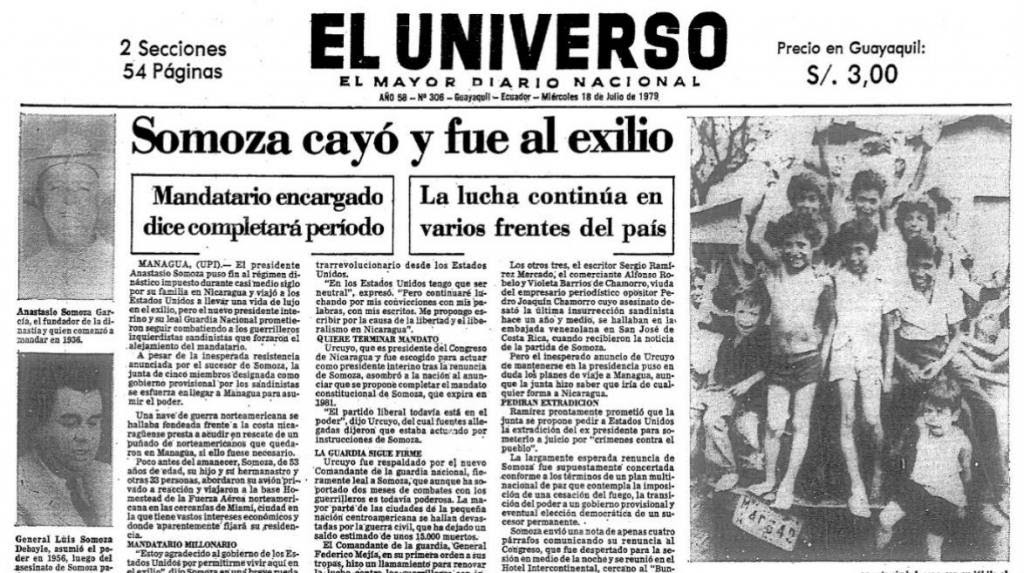 Above: Headlines describe the Nicaraguan Revolution “Somoza Goes Into Exile”

Nicaragua celebrates the 40th anniversary of the Day of Happiness when the US-backed dictator Anastasio Somoza fled Nicaragua in the early morning hours. The final offensive against Somoza and the feared National Guard was led by the Sandinista Front for National Liberation (FSLN), in great measure a bunch of teenagers and young adults with excellent leadership. It lasted about two months – after decades of fighting the forty-five-year dictatorship of a father and two sons.

Somoza spent months bombing Managua and most of the largest cities like Matagalpa, Leon, Estelí and Masaya every single day and in many cases all day long with absolutely no regard for the lives of the people, of the children.

35-year-old Katherine Hoyt lived with her doctor husband Bayardo and their three children in Matagalpa. Click on this link to read Kathy’s gripping memoir of the final offensive in Matagalpa. You will feel like you lived it! Kathy was National Coordinator of the NicaraguaNetwork (the founding project of the Alliance for Global Justice) from 1991 until her gradual transition from staff to the AFGJ board. She led delegations to Nicaragua, created solidarity campaigns, and wrote Nicanet’s variously named information publications for many years and still edits the NicaNotes blog.

Tens of thousands of people gave their lives to end the dictatorship and begin the Sandinista revolution to carry out the 1969 Sandinista Program for transforming society and ending poverty. During the revolution of the 80’s, despite Reagan’s war (which began almost immediately using former national guardsman) they carried out a famous literacy campaign with high school and college students and others trained to be teachers in every corner of the country to bring 50+% illiteracy down to 12%. They brought vaccination coverage up to nearly 100%, eliminated polio and made healthcare and medicines free for all. They carried out a massive agrarian reform that gave land to more than 100,000 families as well as technical education and very low interest loans to farmers and newly formed cooperatives.

Since returning to the presidency in 2007 the Sandinistas have continued to carry out their program with love and determination and with a growing number of Sandinistas! Increasing equality between men and women is real with Nicaragua in fifth place worldwide in gender equity. The government has built twelve major hospitals and hundreds of health centers and maternal wait homes where women wait to give birth near a health center or hospital. Maternal mortality has been cut in half. Just as in the 1980s, Nicaragua often receives awards for their work in health and education.

The United Nations measured illiteracy now to be 4% which is considered zero. More than 95% of children finish sixth grade – in 2006 less than half did. Now they are working to get to 95% for 9th grade and of course education is free. The government provides more than a million children with uniforms, shoes, backpacks and materials and provides food for a hot meal program throughout the nation for over 1.2 million children. Six percent of the national budget is required for the universities which means that a lot of students from the countryside get their classes, housing and food for free.

Nicaragua is the safest country in the region and according to the United Nations has a much, much lower murder rate than the other countries. And it has the best infrastructure in the region which means roads, highways, bridges, ports, sanitation, electricity, water and more. 96% of the population now have electricity and those who consume a small amount receive a subsidy. The lights never go out any more – for anyone who lived in Nicaraguafrom 1990 to 2006 will know this is a miracle.  60% of Nicaragua’s energy is from renewable sources. Thousands of people have received homes or help with homes; currently there is a major housing project all over the country named for Bismarck Martinez, the municipal worked kidnapped, tortured and killed by the purported peaceful opposition in 2018 whose body was finally found in May of this year.

The government made recreation a key part of its program in the 80s and it has increased exponentially in the last twelve years. In every neighborhood there is a nice park, usually with a basketball or soccer court and free Wi-Fi! Yes, free Wi-Fi – now that is revolutionary! All over the country there are large regional parks with things like waterslides and baseball and soccer stadiums for kids and adults. In Managua there is a new baseball stadium lauded by Forbes magazine for its fine construction, comparing it to a major US stadium.

And on the shore of what used to be stinky Lake Managua, there is a miles-long boardwalk and pier with many different kinds of parks, attractions and restaurants where tens of thousands of families visit every weekend. All over the country now there are free and very low cost recreational spaces where people can go to enjoy a Saturday or a holiday.

Today the inequality between the rich and poor is less than in the US and going down every year.  Nicaragua grows most of its basic food making it food sovereign unlike other countries in the region. And the country is investing in its micro, small and medium producers who kept the country fed even during the attempted coup.

The majority of the Nicaraguan people know that those who hold power in the US don’t want poverty to end in Nicaragua nor for most people to get good free healthcare and education and that this is why they backed the attempted coup. And the people also know they have to keep struggling to maintain and expand the conquests of the revolution that they have achieved.  The US knows that to get rid of the revolution at this point would take a lot more than sanctions – it would require an all-out invasion that would become another Vietnam. Help educate your friends – get the US out of Nicaragua!