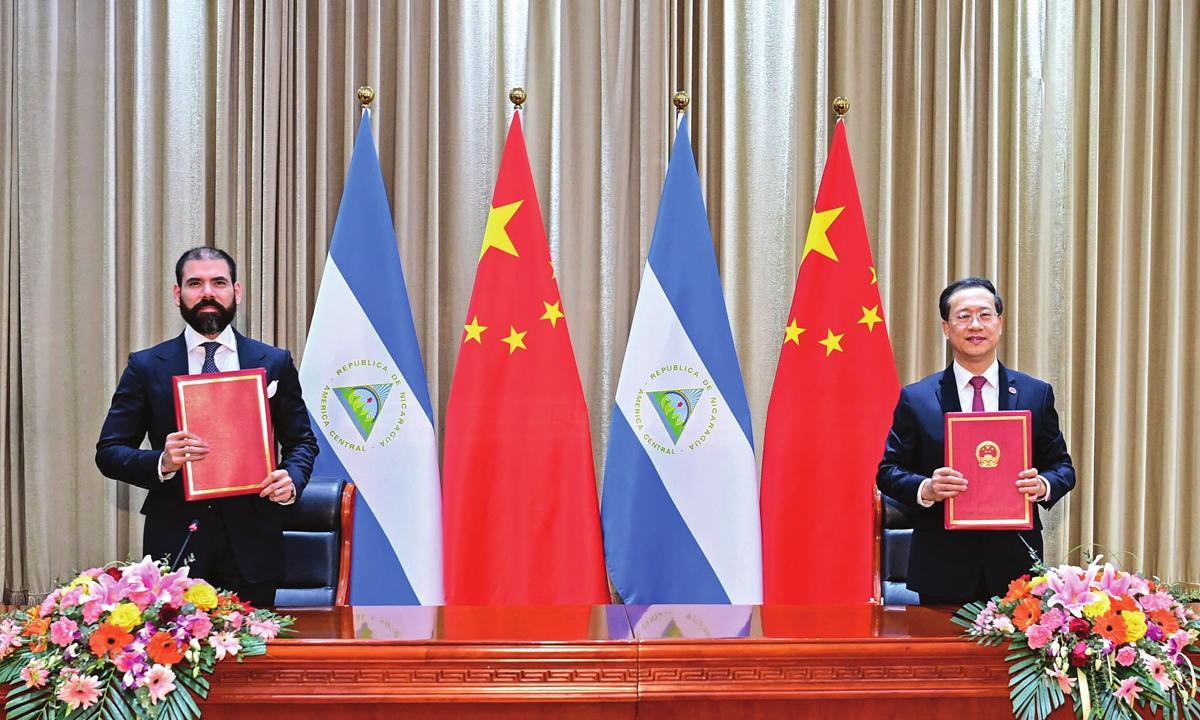 Nicaragua In The Multipolar World

Above Photo: Nicaraguan and Chinese officials display a joint communiqué to resume diplomatic ties between the two countries in North China’s Tianjin on December 10, 2021. Xinhua.

The U.S. regime change effort in Nicaragua has failed.

The people are determined to assert their rights of self-determination and the U.S. is not the only player on the world stage.

The United States and the European Union announced new sanctions on the day that Daniel Ortega was inaugurated as president of Nicaragua. The move was not surprising, given that the United States congress passed the RENACER Act one week before elections which were held on November 7.

The people of Nicaragua have acted in defiance of the United States ever since the 1979 revolution. First, Ronald Reagan used reactionary forces, the Contras, as proxies in an attempt to destroy the new government. The Reagan administration mined Nicaragua’s harbors and fomented a war which cost an estimated 30,000 lives. The United States still owes Nicaragua $17 billion in compensation for the damage it created decades ago.

It is Nicaragua that has acted as a democratic nation, as the Frente Sandinista de Liberacion Nacional (FSLN) gave up power in 1990 after losing an election. They were re-elected in 2007 and three more times, but the desires of the Nicaraguan people are of no importance to the United States. All talk of democracy is a cynical ruse used to secure a neoliberal government which will act as a U.S. vassal state.

The Donald Trump administration picked up where Reagan left off when it instigated a 2018 coup attempt which brought violence and havoc to the country yet again. As in all other foreign policy decisions Joe Biden followed Trump, and called the 2021 election a fraud before it had even taken place. As one of more than 200 election acompañantes, companions, this columnist witnessed a process which was open to all citizens and where opposition candidates freely campaigned.

The bipartisan RENACER Act passed by a huge margin, by voice vote in the Senate and then with 387 in favor and only 35 opposed in the House of Representatives. Biden signed the new law just three days after the election. It is a classic example of hybrid warfare, as it calls for “supporting independent news media and freedom of information in Nicaragua.” Such language is a declaration of interference in the rights of a sovereign nation, in short, a blueprint for war propaganda and regime change.

Fortunately for the people of Nicaragua, the United States is not the only player on the world stage. As part of its effort to protect itself from U.S. aggression and align itself with the majority of the world’s people, Nicaragua established diplomatic relations with the People’s Republic of China, making clear that it would not give up its rights easily. China enthusiastically accepted the recognition and immediately began to discuss new partnerships between the two nations. China also donated 1 million doses of its Sinopharm covid vaccine.

The United States surely has power, and can force its puppets at the Organization of American States (OAS) to join in the non recognition of the Nicaraguan election. But the days of the Monroe Doctrine, and claims that the entire hemisphere are “America’s backyard” are given no credence anywhere else but in Washington.

Nicaragua’s sovereignty is the heart of the matter. It doesn’t matter what Joe Biden or members of the Senate and House think about that government. It also doesn’t matter what fair weather leftists have to say either. The facts are on the side of the Nicaraguans. There were no presidential candidates jailed before the election. There were golpistas, the coup makers, who defied their government’s amnesty and legitimate legislation requiring that they disclose foreign funding.

Be that as it may, anti-imperialists in this country and elsewhere in the world must defend the rights of self-determination for Nicaraguans and all other people. Their choices and their struggles are their own and no one here in the empire has a right to judge what they say are “mistakes.” Nicaragua’s human rights record is head and shoulders above that of the U.S.

Joe Biden presided over mass incarceration as a senator. He enthusiastically supported wars of aggression against Iraq and Libya. Nicaragua has no reason to explain itself to him or to liberals who happily take on propaganda points and in so doing make common cause with claims of American exceptionalism.

A classic regime change trope is to refer to the targeted country as “isolated ,” which means nothing more than being in U.S. cross hairs. As a member of a Black Alliance for Peace delegation in Nicaragua, this columnist saw the presidents of Venezuela and Cuba, and diplomatic representatives from Russia, China, Angola, India, Sudan, Vietnam, Japan, Syria, Libya and Palestine among others, in attendance at the presidential inauguration. Billions of people from every continent were represented there and prove that U.S./NATO/EU opinions carry little weight elsewhere.

Nicaragua does not have to suffer insults at the hands of the Organization of American States (OAS), Washington’s creation and vassal. It made the principled decision to leave the OAS and expose the group for the sham that it is. Nicaragua is represented in the Community of Latin American and Caribbean States (CELAC), an independent organization working in consensus on behalf of millions of people.

The United States is still a military and economic power. But that power has its limits, which is why the need to undermine a small Central American country with a population of only 6.5 million people is given such a high priority. Every victory against U.S. authoritarianism is significant. Just consider how much effort is put into marginalizing those countries that do manage to exist outside of U.S. influence. The world is multi-polar and Nicaragua’s continuing efforts to shape its own destiny is proof.